This Ancient City in Yemen Is in Danger of Destruction

Columns mark the entrance to a temple from the 7th century B.C. that was discovered by German archaeologists in Sirwah, Yemen. Seen in May of 2008.
Irmgard Wagner/DAI—AP
By Sarah Rijziger / History Today
History Today

For the past six months a devastating war has been fought in Yemen between Houthi rebel fighters, who control the southern Arabian state’s capital, Sana’a, and are allegedly backed by Iran, and the forces of Yemen’s neighbor, Saudi Arabia. Daily Saudi air strikes do not differentiate between military, civilian or archaeological targets and they have caused severe damage to the ancient Sabaean city of Sirwah, situated between the Yemeni highlands to the west and the vast empty quarter to the east.

The ruins of Sirwah are just as impressive as those of the more accessible and celebrated Sabaean city of Marib, just 30 miles to the east. The kingdom of Saba (biblical Sheba) existed from approximately 1000 BC to AD 290, first as the main power in the south of the Arabian Peninsula and later in constant conflict with other emerging south Arabian kingdoms. The Sabaeans have left us a wealth of architectural wonders, including the Great Dam of Marib, built in the eighth to seventh century BC and one of the most extraordinary architectural projects of the ancient world, and numerous temples.

There is especial concern about Sirwah’s main tower, which has been hit hardest by the explosions, and a now cracked inscription dating back to the seventh century BC. Damage has also been inflicted on a row of carved ibexes on the outside of its temple wall, some of which has fallen down, and its pillars, which have been hit by shrapnel. All these structures had withstood the centuries, but rockets destroy in seconds what nearly three millennia could not. Even if restoration can save the tower from collapsing – which at this moment is far from certain, since air strikes are ongoing – irreparable damage has been done.

Some scholars have claimed that Sirwah was Saba’s first capital before it was moved to Marib, though Iris Gerlach of the German Archaeological Institute (DAI), who has conducted excavations on the site since 2001, has concluded that Sirwah was never Saba’s capital. It was, however, a major trading post on the incense route that connected Arabia and East Africa, the second-largest Sabaean settlement and its pre-eminent religious center.

The main temple in Sirwah was dedicated to the Sabaean god Almaqah, whose epithet in Sirwah was ‘Ba’al Awa’el’, or ‘master of the ibexes’, which explains the numbers of carved ibex heads found on the site. It has often been suggested that the ibex represented the god Almaqah himself; however, since he is called their master, this is unlikely to be the case.

The temple was entered through a portico consisting of six pillars, over the centuries inscribed by several leading figures; its sanctuary was in use until the end of the third century AD. The floor of this sanctuary was paved with huge stone slabs – smooth, white and still in place. In the middle stood – and stand – the two longest and most important Sabaean inscriptions so far found in Yemen.

First is a huge inscription (the so-called ‘Naqsh an-Nasr’ or ‘Inscription of Victory’) left behind by Karib ‘il Watar bin Dhamar Ali, a mukarrib (ruler) of Saba, in 685 BC. It tells us a great deal about extensive building and repair activity on the sophisticated irrigation system in the oasis of Marib. The inscription also refers to numerous wars fought by the Sabaean army. For example, Karib ‘il Watar’s soldiers invaded the rival kingdom of Awsan, where they killed 16,000 people and took 40,000 prisoners-of-war. Some of the places referred to still bear the same place names.

The Austrian Arabist Eduard Glaser discovered the inscription in 1888 when he was surveying the region’s ancient sites. Glaser’s assistant spent days copying it down and his 55 pages of notes are now in the Academy of Sciences in Vienna. It is good that he did so because, a century on, the stone bearing the text was used as the wall of a goat shed by civilians living among the ruins and parts of it are now illegible. The second inscription, from Karib ‘il Watar’s predecessor, Yitha’amar Watar bin Yakrub Malik, dating from around 715 BC, was unearthed in 2005.

It was Yada’il Dharih who built Sirwah’s high oval-sized temple walls on which can be read: ‘Yada’il Dharih, son of Samah Ali, mukarrib of Saba, built the surrounding wall of the temple of Almaqah’. He was the same Sabaean ruler who built at least part of the wall surrounding the Awwam Temple in Marib in the middle of the seventh century BC. The temple in Sirwah may be much older than that; after all, Yada’il Dharih did not state that he built the temple itself, but only that he walled its sanctuary. The fact that the two monumental inscriptions are older than the surrounding wall also demonstrates the antiquity of the temple site.

For some reason, the temple is commonly referred to by locals as ‘Qasr Bilquis’ (Bilquis’ castle). Bilquis is the name given by the Arabs to the biblical and quranic Queen of Sheba, who visited Solomon in Jerusalem, accompanied by camel-loads of incense and myrrh, in which the kingdom traded. According to scholars, this probably took place around 950 BC. The origins of the name Bilquis remain a mystery. It has not yet been found on any of the thousands of Sabaean inscriptions known to archaeologists.

Altars and banquet areas have also been found on the temple site, as well as bone deposits of sacrificial animals and hundreds of votive offerings. In the wall surrounding the temple, which was part of the city wall at the same time, its tower was well-preserved – until recently, at least.

Sirwah was deserted after the Sabaean kingdom ceased to exist around 290 AD after being defeated by the Himyarites, a powerful semitic tribe from the south, which united the whole of ancient Yemen under their rule towards the end of the fourth century AD, just as the Sabaean Karib ‘il Watar had done centuries before. Never has Sirwah been so endangered as it is now.

Sarah Rijziger is a historian of pre-Islamic Yemen based in Sana’a. 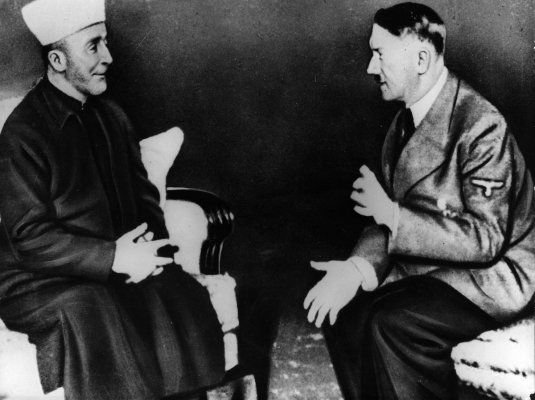 What Hitler and the Grand Mufti Really Said
Next Up: Editor's Pick