Talking to Steve Martin and Edie Brickell is a little bit like listening to a tournament of compliments. The banjo player and singer-songwriter, whose 2013 album Love Has Come For You earned them a Grammy for Best American Roots Song, brim with a mutual admiration that shines as much through conversation as it does through the songs on their second album, So Familiar, released Oct. 30.

Though Martin is best known for his comedic roles—a penny-pinching father of the bride and one of Saturday Night Live’s wild and crazy guys, to name just a couple—he’s also a Grammy-winning, lifelong banjo player who has dedicated recent years to musical projects more than Hollywood productions. Brickell has enjoyed a decades-long recording career as both a solo artist and a frontwoman, most notably for the the New Bohemians, which released its debut album in 1988.

So Familiar expands on the bluegrass sound of the duo’s first album, drawing from pop and rock influences for a more contemporary Americana sound. Since the pair connected over music at a party a few years back, their collaboration has also produced a musical, Bright Star, which premiered in 2014 and reopens in December at the Kennedy Center in Washington, D.C., to be followed by a Broadway debut in March 2016.

In the lead-up to the release of the album and musical, Martin and Brickell spoke to TIME about their songwriting process, their Texas roots and why they work so well together.

The two of you didn’t know each other very well when you started the first album. Now that you’ve been collaborating for a few years, did it change the way you worked on the second album?

Martin: It actually didn’t change the way we work at all, but I think it’s a little easier. We have a lot more back and forth than we used to when we first started. You think, Edie?

Brickell: Yeah, but it’s always been effortless and easy with Steve because of his nature. He’s easygoing and he makes work fun, so it doesn’t feel like work anymore. It just feels like a creative exploration, and he’s open to anything, and just makes all the choices feel infinite and possible.

When you started working on the second album, were there specific ways you were intentionally trying to depart from the first?

Brickell: In my view, it happened naturally. A lot of these songs are songs that are in our musical, so the perspective comes from characters. But that also happens organically and naturally with Steve, because his banjo melodies will inspire me to just start singing, and I get very lucky because what I need to do will happen based on his music.

Martin: Well, Edie’s being very modest. Some of these songs were written for the musical, some were written as songs and then we put them into the musical, and then some were just written as songs. Many of the lyrics, as she says, were actually written for characters, which is an extremely difficult thing to do. It’s not like writing a song where anything goes. This has to adhere to the logic of a character in the show.

In the span of a couple of years, you will have put out two albums and a musical. How do the three works relate to one another?

Brickell: The first album inspired the idea for the musical, quite by accident. A song from our first record is the foundation from which the musical has grown. So you can sort of leap-frog from the first record to the musical, and then the second record expresses a lot of the characters’ information and perspectives that show up in the musical. And then, as Steve said, there were a handful of songs that just happened by accident, sort of spontaneous expression against his music that survived to show up on the record, having nothing to do with the musical. For instance, the one that we made a video for, “Won’t Go Back.”

Edie, was this brand new for you, writing a song from the perspective of a specific character?

Brickell: Yeah, and I found that I love that. I would rather do this than search my soul! The first record you put out is the most honest, because you’re unaware of anybody listening to it. And then once fame hits, or recognition of an audience comes into play, it can’t help but mess with your mind.

Martin: I’d just like to add that Edie is really, really good—I don’t want to say surprisingly good, but I’ll say surprisingly because she’s never done it before—at writing lyrics for scenes, and people’s thoughts, which is so essential to what’s going on in our show.

In terms of your songwriting process, Steve, when you put down the banjo part, are you writing the song about a particular topic?

Martin: No. Especially in the first record, I would write a mood, and Edie was able to understand that mood and translate it into lyrics, and likewise, for the songs on this record. I never write with an idea in my head except a musical one—fast, slow, sad, happy. And Edie is the interpreter of those moods. Sometimes, I’d send her something so simple that I thought, well this is stupid, but maybe she’ll get something out of it because it’s so simple, and then she delivers a song like “Won’t Go Back.”

When Edie writes the lyrics and sends them back to you, do they become personal for you, even though the lyrics come from her perspective?

Martin: Oh sure, but also in many cases, Edie writes the melody that goes with the lyric, too. In some cases, she follows the lyric laid out, and in other cases not at all, which actually makes a really nice counterpoint, so you always have two melodies going. But sure, they become personal. Take a song like “Won’t Go Back.” It’s really about the joy of a break-up, and I wrote a song that was about the joy of a break-up, too, so I completely understand it.

Some of the songs are piano ballads, where the banjo is background if it’s there at all. Were these written in a different way?

Martin: Edie wrote “Way Back in the Day” by herself. I wasn’t involved in that at all. But “By Your Side,” for example, I feel it’s enough to have co-written the music, I don’t really have to be present on it. Actually, the banjo is present, it’s just not significant. And by the way, it was fast-paced, remember that? And then we slowed it way down, and she had actually written two versions of the same song with completely different melodies and we ended up using them both, and people don’t recognize that it’s the same back-up.

Brickell: That’s what would happen with a lot of his banjo tunes. The melody had so much personality that it would inspire so many different thoughts, and I would try to send him as many choices as possible because I couldn’t make up my mind which would work best. The minute you hear his music, it’s so evocative, there’s just a story in it. He doesn’t just send a chord progression, he sends a melody with a lot of personality, and you can’t help but be inspired by it and let the story flow through.

You guys are very kind to each other.

Martin: We work together very well.

Steve, you’ve said that this isn’t a bluegrass album, it’s just an album of songs. I’ve also heard it described as Americana. Do you think consciously about genre when you’re making music?

Brickell: I never do. I just want to keep my heart open and hope that a nice strong melody and something simple and real will emerge.

Both of you were born in Texas, though I know you spent different amounts of time there. How much has that influenced the kind of music you make today?

Brickell: I guess it’s just the kinds of music I was exposed to, in terms of melodies and the records that were playing. I think it’s the people and the characters in your life that inspire or influence how it is that you write and the perspectives that come out emotionally. So yeah, I guess Texas plays a big part in that.

Martin: I didn’t grow up with music in the house at all, except music of the worst kind, so I really got my musical influences after I had moved to California, coming over the radio and live music, bluegrass and folk music that was being played at the time in Orange County.

Can I ask what “music of the worst kind” was?

Martin: There was a term for it—still is: elevator music. My mother and father really liked to listen to innocuous radio and did not like rock and roll, or made fun of it.

Do you have plans to continue making music together?

Martin: We have a musical that’s opening very soon in D.C. I think as long as it’s running, it will be an ongoing operation for us. And as far as the future goes, we don’t know what we’ll be doing, we have so much on our plate right now.

Brickell: We’re going to have to arm-wrestle over who plays our characters in the musical.

Are you going to be in it? 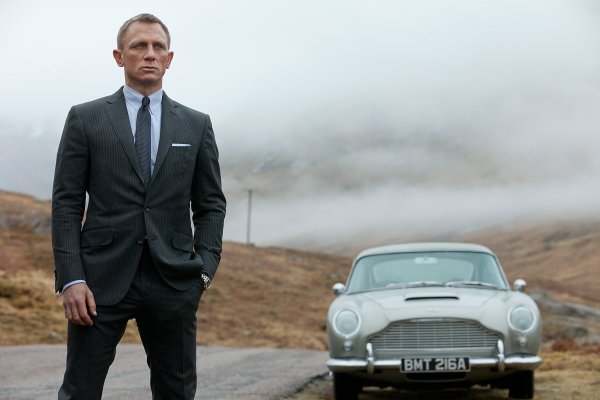 The 155 Best Candidates to Become the Next James Bond
Next Up: Editor's Pick