While shooting a promotional film for whale watching company Eagle Wing Tours, a videographer captured footage of a killer whale punting a harbor seal about 80 feet into the air off the coast of British Columbia. Mike Walker, the owner of Victoria-based Roll.Focus. Productions, was the one who filmed the attack, according to AmeriPublications. The Orca can be seen aggressively chasing the seal before using its tail to flip its prey out of the water.

“We do a ton of whale watching, but this is fairly rare,” Walker told AmeriPublications. “Brett Soberg, owner of Eagle Wing, mentioned to us that it’s only the fourth time he’s seen an orca do that in about 20 years. It was spectacular. You can hear me yelling ‘Yes!’ over and over in the video.”

The caption of the video notes that this pod of whales is known as the T69s and that T69C, the lone male in the group, was the one to hurl the seal. 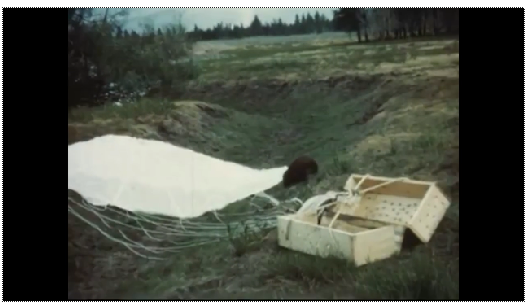 The True Story of Idaho's Parachuting Beavers
Next Up: Editor's Pick