What the Budget Deal Really Means

President Obama and congressional Republicans have worked out a tentative budget agreement to raise the debt limit before next week’s deadline and to avert a potential government shutdown later this year. The agreement, if approved by the GOP-controlled Congress, would end five years of tumultuous fiscal negotiations in Washington that resulted in a government shutdown in 2013. The agreement is a parting gift from outgoing Speaker of the House John Boehner to his all-but-certain successor, Paul Ryan, dealing with the most pressing issues facing lawmakers before he turns over the gavel. The deal will increase federal spending by $80 billion over the next two years, including $30 billion for defense, and make cost-saving changes to Social Security disability insurance. But while it would eliminate most fiscal uncertainty through the 2016 election, it has already drawn the ire of conservatives on Capitol Hill who are pressuring Ryan to oppose the deal.

After months of avoiding direct confrontation, Martin O’Malley is going directly at Hillary Clinton in a series of television interviews. He follows Bernie Sanders‘ line of attack that Clinton hasn’t been a consistent progressive, though it will likely strike many voters as too little, too late from the long-shot former Maryland governor. Sanders, meanwhile, is in the midst of a two-day television blitz as he tries to put a stop to Clinton’s building momentum, but is finding himself struggling to deliver the pointed soundbites necessary to stand out above the din.

Jeb Bush‘s top advisors laid out their case against his former protégé, Marco Rubio, at a donor summit in Houston Monday, a recognition of the younger candidate’s stronger position in the polls and whose slow-but-steady campaign has drawn heightened interest from the GOP establishment now that Bush’s has stumbled. Branding his as the “GOP Obama,” the campaign is hoping that voters and donors will turn away from Rubio’s charisma and focus on his lack of experience. That didn’t work out so well for Clinton in 2008. After yakking it up with his brother in Houston, Bush is rolling out his plan to reform Medicare and Social Security at 10:30 a.m., while Chris Christie has released a new video touting that he released his entitlement reform plan six months ago.

Ben Carson has taken a slight lead over Donald Trump nationally according to a CBS/New York Times poll being released today. The within-the-margin-of-error lead, knocks Trump out of the top spot for the first time in months and could cause the businessman to rethink his strategy.

Carson releases a new television ad. A Koch brother is keeping his powder dry. And for Trump, the struggle was real.

Boehner’s Swan Song: An End to the Fiscal Cliffs
TIME’s Jay Newton-Small on how Boehner hopes to strike his final deal

Cruz’s Quiet Fundraising Strength: A Network of Wealthy Donors
The senator’s broad contributor base could give him staying power in a drawn-out nominating contest [Washington Post]

“What the American people and Democrats have to know: Which candidate historically has had the guts to stand up to powerful people and take difficult decisions?” — Bernie Sanders to MSNBC’s Rachel Maddow on why he’s going on offense against Clinton

As a Boss, Carly Fiorina Was a Contradictory Figure at Hewlett-Packard [New York Times[

Inside the World of Donald Trump’s Superfans [Washington Post] 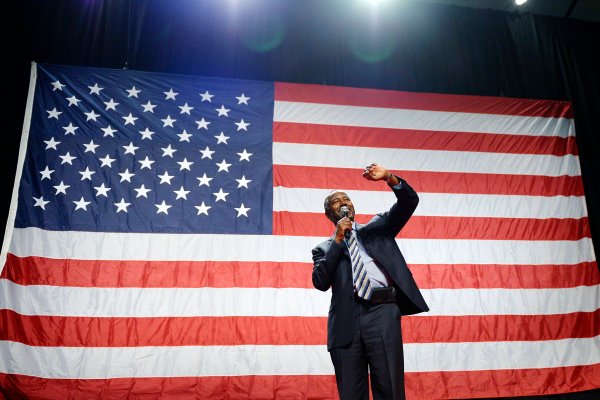 Carson Inches Ahead of Trump in New National Poll
Next Up: Editor's Pick