Kauffman Stadium is prepared on Media Day for the Major League Baseball World Series between the New York Mets and the Kansas City Royals in Kansas City, Mo. on Oct. 26, 2015.
David Goldman—AP
By Sean Gregory

So you haven’t really found time to follow the slog that is regular season baseball. You’ve caught bits and pieces of these dramatic October playoffs, but you’re not all that invested. Like the churchgoer who only turns up at Easter, you are a baseball fan only for the World Series. If so, this guide to the New York Mets-Kansas City Royals matchup, which starts Tuesday night, could come in handy. Here are six dynamics you need to know about.

The charm of this Fall Classic lies in these fan bases. They’ve each gone through hell. One will finally taste baseball bliss. Yes, the Kansas City Royals reached Game 7 of last year’s World Series before falling to Madison Bumgarner and the San Francisco Giants. But that series ended in excruciating fashion. The Royals put the tying run on third with two outs in the bottom of the ninth—Alex Gordon nearly scored after a couple of Giant misplays turned a single into a potential inside-the-park stunner. But Kansas City fell 90 ft. short. Plus, before last year’s run Kansas City hadn’t been to the postseason since 1985, the year the Royals last won the World Series. They had three winning seasons in 20 years. The Mets strung together a few decent seasons over that time—a surprise pennant in 2000, a division title in 2006. But since New York’s last World Series win, in 1986, the team has been best known for terrible free agent signings—a book on the 1992 Mets was titled “The Worst Team Money Could Buy”—blowing late season leads, and fading into irrelevance after the Bernie Madoff fallout sapped payroll (Mets owner Fred Wilpon was a Madoff “investor”).

A tale of 2 seasons

The Royals ran the table this year. They never fell out of first place in the American League Central. The middling Mets, on the other hand, were threatening to waste historically effective pitching because their offense belonged in the minors. They needed enforcements at the trade deadline. GM Sandy Alderson delivered: deals for utility men Kelly Johnson, Juan Uribe, middle reliever Tyler Clippard and especially power hitter Yoenis Cespedes paid off instantly. The Mets won seven straight after the Cespedes deal was announced on July 31, turning a two-game deficit in the division into a 2 1/2 game lead they would never relinquish. On average, Cespedes slugged a home run once every 13.52 at bats for the Mets; in Detroit in 2015, he hit one every 22.38 at-bats.

The 6-ft., 10-in. pitcher Chris Young, Kansas City’s Game 4 starter, made 24 starts for the Mets in 2011 and 2012; he went 5-9, with a 3.76 ERA. But the most consequential player to wear both the Royals and Mets uniforms was pitcher Bret Saberhagen. With Kansas City, Saberhagen won two Cy Young awards, and was on the mound when the Royals clinched the ’85 title in Game 7 of that series; he pitched a complete game shutout. Following the 1991 season, Saberhagen was traded to the Mets. When he was healthy, Saberhagen pitched well for some terrible teams; he made the All-Star roster in the strike-shortened 1994 season, when he finished the year 14-4, with a 2.76 ERA. But Mets fans don’t remember Saberhagen’s outings at old Shea Stadium. For them, it was all about the bleach, not baseball. In 1993, when the Mets lost 103 regular season games — and this was the year after “The Worst Team Money Could Buy”—Saberhagen squirted bleach on a pack of reporters. This was after Saberhagen tossed a firecracker under a table near reporters. “It was a practical joke,” he said of the firecracker incident. “If the reporters can’t take it, forget them.” But at least Saberhagen didn’t hurl an explosive device outside a car window that year, injuring three fans—including a two-year-old girl. That was Vince Coleman, who also played for both the Mets and Royals.

In other words, Kansas City can thwack the fastball. Though plenty of pressure rests on the starters—the core three of Edinson Volquez (93.8), Johnny Cueto (92.2) and Yordano Ventura (95.6) are also live arms—the bullpen battle will be just as intriguing. Two All-Stars, Kelvin Herrera and Wade Davis, will finish games for the Royals; Davis’ stats—0.94 ERA in the regular season, no runs surrendered over 6.2 innings this postseason—are mind-boggling. Meanwhile, Jeurys Familia of the Mets has morphed into Mariano Rivera in these playoffs. He hasn’t given up a run in 9 2/3 innings of relief.

So the numbers say Kansas City will be hacking at, and hitting, the Mets power pitching, But most likely, the Royals will keep the ball in play — testing the New York defense. The advanced metrics say that the Mets are slightly below average in the field, while the speedy Royals have the best defense in the game. Advantage Kansas City? However…

Is it sacrilege to preview this World Series, and not mention Daniel Murphy until the end? By now, almost every baseball fan, casual or otherwise, has heard about Murphy’s historic postseason: He’s hit a home run in six straight playoff games, a new major league record. The Mets second baseman averaged one home run every 35.6 at bats in the regular season. He’s hit one every 5.43 at bats in the playoffs. In other words, Murphy’s power is up 556% this postseason. Talk about an October surprise. 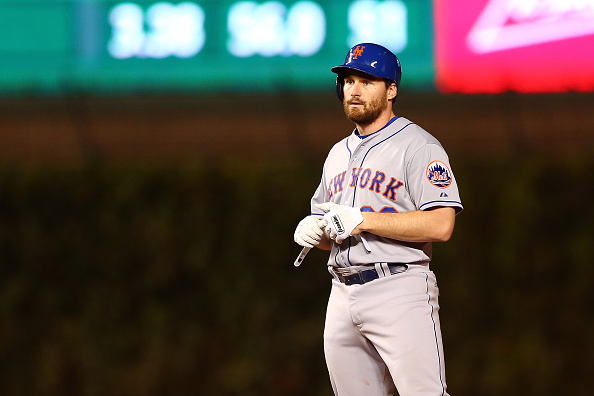 When Mets Superstar Daniel Murphy Was 'Runt of the Litter'
Next Up: Editor's Pick