Indonesian President Joko Widodo is pictured after seeing off Danish Queen Margarethe at the presidential palace in Jakarta on Oct. 22, 2015
Beawiharta Beawiharta—Reuters
By Yenni Kwok

When U.S. President Barack Obama welcomes Indonesian President Joko Widodo at the White House on Monday, certain similarities between the two leaders will be undeniable. Both are of the same age (54 years old), both were political outsiders whose meteoric rise to power sparked hope and expectations for change. And for both men, this initial optimism faded somewhat after underwhelming starts to their respective first terms.

Jokowi, as the leader of Southeast Asia’s most populous country is affectionately called, departed for the U.S. on Saturday, just days after completing his maiden year in office. Trade and investment are high on the agenda. Apart from his meeting at the Oval Office, he is set to meet the U.S. Chamber of Commerce and fund managers in Washington, and later tour Silicon Valley to see Apple CEO Tim Cook and other tech giants’ executives. “The main focus of this visit is to increase the bilateral cooperation between Indonesia and America,” Jokowi said in Jakarta before leaving for the U.S. “Mainly in investment and trade, and also in digital economy and creative economy.”

But the upbeat note aside, a plethora of problems back home are overshadowing his trip. Here are four challenges that Jokowi is facing:

1. Environment
The months-long forest fires that are raging in Sumatra and Kalimantan, and more recently in eastern Indonesia, have gone from bad to worse, producing haze that affects millions of people in the country and other Southeast Asian nations: Malaysia, Singapore, Thailand and even the Philippines.

Indonesia is the third biggest emitter of greenhouse gases, after the U.S. and China, primarily because of peatland degradation, forest fires and deforestation. But the recent blazes — blamed on farmers, palm-oil and pulpwood companies clearing peatland forests — have taken it to a staggering new level. According to research by Professor Guido van der Werf, since September, daily emissions from Indonesia’s forest fires have exceeded those of the U.S. economy.

With the multinational efforts putting down the fire failing to contain them and children dying because of haze, Jokowi has instructed his ministers to prepare the mass evacuation of residents. But he is accused of not acting fast enough to tackle the annual manmade disaster. “The lack of Indonesian leadership in the haze issue is telling,” says Natalie Sambhi, Indonesia analyst at the Australian Strategic Policy Institute.

2. Human rights
Obama, who spent some of his childhood years in Jakarta, has repeatedly praised Indonesia, including when he first met Jokowi soon after his election victory last year. Indonesia, the country with the world’s largest Muslim population, Obama said, is “an example of democracy, tolerance and pluralism.”

But one year on, Jokowi has lost much of his pro-human-rights, reformist luster, thanks to his hard-line stance on the death penalty for drug convicts and his frequent silence on the ongoing intolerance toward the country’s religious minorities.

This month, a hard-line Muslim mob besieged and burned down a church in Aceh Singkil district, saying it lacked a building permit. Local authorities later tore down nine other churches and planned to demolish one more. A mayor in the town of Bogor issued a circular last week banning a religious celebration of Shi‘ite Muslims.

Jokowi is also reluctant to address the country’s past human-rights abuses, including the 1965 mass killings. While Indonesians enjoy freer discussions about the pogrom, which killed between 500,000 to 1 million communists and suspected communists, than previously, there is a new, chilling trend of official obfuscation regarding the slaughter.

Earlier this month, 77-year-old Tom Iljas, a former political exile who resides in Sweden, was detained and deported from Indonesia after attempting to visit a mass grave where his father, a victim of the massacre, was believed to be buried. Police in Salatiga seized and burned copies of a campus magazine that published stories of the killings. The Ubud Writers and Readers Festival was forced to cancel events related to the 1965 tragedy after local authorities threatened to revoke its permit.

3. Economy
The global economic slowdown has weakened the economic growth in Southeast Asia’s biggest economy. Indonesia rupiah has seen its value sharply fall against the dollar, making it one of the worst performing currencies in Asia.

Jokowi’s Cabinet reshuffle in mid-August won praises for including respectable figures in his economic team, such as Harvard-educated private-equity executive Thomas Lembong as Trade Minister (replacing Rachmat Gobel, who once said imported secondhand clothes could transmit the AIDS virus) and senior technocrat and former central banker Darmin Nasution as the Coordinating Minister of Economy. Jokowi’s new economic team has launched a series of economic packages — the fifth installment was revealed last week. “Though a bit late, the Cabinet reshuffle is a step toward the right direction,” says Metta Dharmasaputra, executive director of Katadata, a business think tank in Jakarta.

Although Jokowi has repeatedly assured overseas business and political leaders that Indonesia welcomes foreign investment, his economic policies tend to lean toward protectionism, from laws governing mining and technology, a rise of import duties on a range of consumer goods to more restrictions on hiring foreign professionals.

“It is possible that Jokowi wants to clear this mixed signal during his U.S. visit at the end of this month,” Metta tells TIME, “including the possibility for Indonesia to join Trans-Pacific Partnership that is spearheaded by the U.S., a longtime business and trade partner of Indonesia.”

4. Foreign policy
Jokowi’s presidential candidacy may have won support from international celebrities such as Sting, Guns N’ Roses guitarist Ron “Bumblefoot” Thal and Jason Mraz, but in his foreign policy the President tends to look inward rather than outward. “Jokowi’s foreign policy is driven primarily by domestic concerns and less by international status, as it was under [Yudhoyono],” Sambhi says.

The South China Sea issue is likely to be a subject of discussion with Obama. Indonesia, which is not a claimant in the territorial dispute, is reluctant to take a leadership role to mediate the conflict between China and smaller ASEAN countries like Vietnam and the Philippines. While Jakarta is wary of Beijing’s encroachment in the Indonesia-administered Natuna area off Borneo, it also wishes closer investment ties with China. (China won the high-speed rail project between Jakarta and Bandung, following a murky bidding process, which angered Japan.)

The complicated relationship with Beijing constrains Jakarta from taking a strong position on the South China Sea, says Sambhi. “And you can see that in its lack of engagement with ASEAN. It prefers to deal with China on a bilateral basis and let other ASEAN states do the same.” 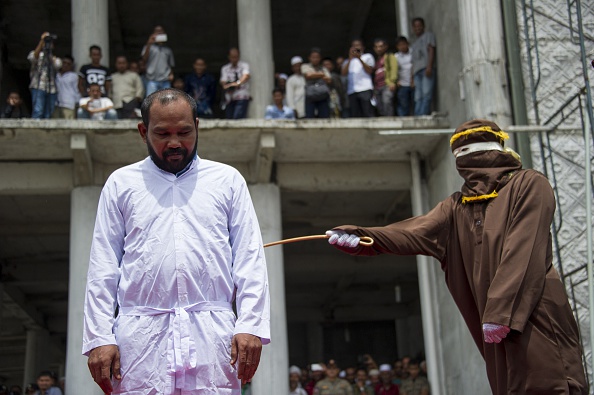 Gay Sex Is Now Punished With 100 Lashes in Indonesia's Province of Aceh
Next Up: Editor's Pick