The historic Room where the United Nations security charter was signed is seen in this general view with members of the Chinese delegation lined up while Dr. W. K. Wellington Koo signs the charter for this country on June 27, 1945. The room is in the San Francisco Veterans building.
Toronto Public Library / Getty
By Julia Zorthian

As the celebration rolls around once again this weekend, it will surely be used as an occasion to celebrate the U.N. and its values: spreading democracy, promoting peace, combating world hunger and other sweeping noble missions. But when it’s not United Nations Day, the organization often finds itself criticized for both its failures and tendency as an unwieldy organization to not take decisive actions.

So, in order to provide you with some specific success examples to sprinkle into your conversations over the course of the day, here is a list of five specific, mostly-uncontroversial accomplishments that the U.N. has actually achieved in the 70 years of its tenure:

Saving the Pyramids: UNESCO, the U.N.’s cultural agency, has a list of World Heritage Sites that it deems culturally significant and will take steps towards preserving or protecting. The area around the Giza pyramids and Sphinx in Egypt is one such site. When construction began on an eight-lane highway a mile south of the Sphinx and three great pyramids in 1995, the impending change threatened the architectural site and its ancient structures. UNESCO dispatched an expert mission to Egypt to meet with government authorities about diverting the highway, which the officials agreed to do.

Eradicating Smallpox: The World Health Organization, a U.N. agency, led the global effort to eradicate the disease. By 1980, after almost 13 years of an immunization campaign, the WHO declared smallpox extinct. TIME reported on its campaign in 1977:

Protecting the Ozone: In 1987, the U.N. Environment Program sponsored a conference of 24 nations to pledge to take action against the deterioration of the ozone layer at the time. After nearly five years of talks, the group produced the Montreal Protocol — a treaty to reduce the emissions of chlorofluorocarbons, or CFCs, on a broad scale. That week, TIME reported:

In an era where climate change is becoming increasingly dire, the agreement is still hailed as a success in environmental protection.

Helping Save the Lives of 90 Million Children: UNICEF is a broader example, but merits acknowledgment on any list of U.N. successes. Created in 1946, the United Nations Children’s Fund works for the rights of children, and won the Nobel Peace Prize less than two after it was founded. Its efforts have steadily increased since; in its last annual report, the fund says it has helped save over 90 million children since 1990.

Promoting Arms Control: The U.N. was founded with goals of promoting non-violence by means of nuclear weapons. The resolutions of disarmament proposed in U.N. General Assemblies and discussed by the five permanent members of the Security Council played an instrumental role in the lead-up to the 1968 Treaty on Non-Proliferation of Nuclear Weapons.On March 22, 1968, TIME described the Treaty and the U.N.’s role:

Ultimately, the NPT did not eradicate nuclear weapons—but it moved U.N. efforts forward significantly, securing a commitment of responsibility from major world powers, which is what the U.N. is all about. 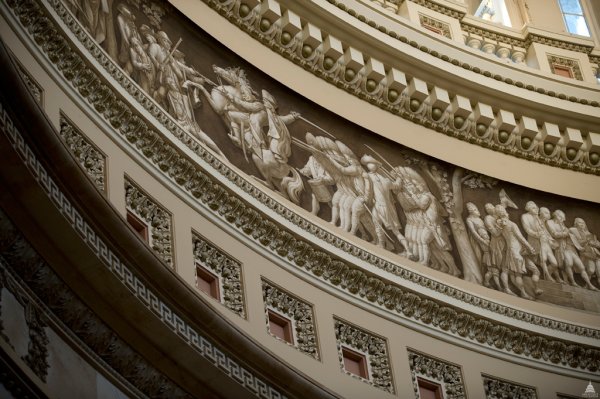 See the U.S. Capitol's Rotunda Go From an Idea to an Icon
Next Up: Editor's Pick