I must admit, I was riveted by the House Special Committee’s Benghazi hearings. It was gripping and human—a reminder that politics can be the best theater we have. It was subtle theater, though: not the broad stroke Reality TV nonsense that has diminished the 2016 presidential race. It was a classic drama about an endurance test, in some ways a torture session, and whether the main character, Hillary Clinton, would survive or be broken.

She did, of course, survive—and it was a remarkable thing to behold. She survived with her humanity not only intact, but enhanced…by her laughter, coughing, patience, comprehensive knowledge without seeming robotic, and clear concern about the Benghazi tragedy. I have some big differences with Clinton on matters of foreign policy—I thought the decision to go into Libya was wrong in the first place; I thought her desire to get involved in the Syria mess showed that she hadn’t learned enough from our Iraq and Libyan experiences. But she demonstrated a presidential level of preparation, endurance and grace under pressure in the face of the Committee’s shameless marathon.

Senate Opens to Hear Articles of Impeachment Against Trump

As for the Republicans, it’s about time they learned their lesson: they have been obsessed with the Clintons for more than 20 years now. It’s a sick obsession. There has been a lascivious edge to it—from Paula Jones to Vince Foster to Monica Lewinsky to Alabama Congresswoman Martha Roby’s embarrassing question, late in the hearing, about whether Clinton “slept alone” when she went home from the office the night of the Benghazi attacks.

The current Republican fixation is Sidney Blumenthal, a lesser courtier equipped with an eternal smirk—and it demonstrates how out of touch with American reality the Republicans can get when they get all wrapped up their obsessions. The fact that Blumenthal pestered Clinton with emails and that Clinton passed them along to members of her staff is a slight embarrassment. The attempt by former prosecutor Trey Gowdy to conflate Blumenthal’s access with Ambassador Chris Stevens’ lack of access is courtroom sleight of hand. Clinton has an unfortunate weakness for sycophants, but she is allowed to have friends. And friends reside in a different category than staff. Blumenthal was a friend; Stevens was staff. The Ambassador used the proper channels to convey his concerns to Clinton’s staff. Some of his security concerns were met, others were not.

It has become clear over time—and was made abundantly clear in yesterday’s hearing—that the temporary consulate in Benghazi was not a very important outpost. It didn’t even have the facilities to handle secret cables…and you have to wonder if its very existence was a figleaf for the CIA annex across the street—which may have been the real nexus of the Benghazi operation. If that’s the case, the CIA had an equal, perhaps even greater, responsibility than State for the security of the compound. But David Petraeus, who was then Director of the CIA, hasn’t been called by this sham committee. (And it should be noted that CIA plays a far more risky game overseas than State does; it often requires the subterfuge of innocence—hence, less security—for its facilities.)

In late afternoon, MSNBC’s Laurence O’Donnell made a wise observation about the failure of these hearings: “Too many lawyers.” He noted that in a courtroom, litigators are constantly trying to create doubt, “Was he wearing a white shirt or a blue one?” Those of us who are addicted to mysteries, know how it plays out: “Ahh, so you can’t recall whether he was wearing a blue shirt or a white one…Then how on earth can you recall that he was carrying his beretta in his shoulder holster?”

But it doesn’t, really. And every last attempt by Republicans to show that (a) Clinton didn’t care about this tragedy or (b) that she participated in a politically-motivated coverup of the true nature of the Benghazi attack, fell disastrously flat for the Committee’s hapless prosecutors. On Point A, she attended a deputy’s level meeting—something a Cabinet officer rarely does—in the hours after the attack to make sure that State, Defense, CIA and other relevant agencies were doing all they could to respond. On point B, it seems clear that a local militia used the cover of regional protests against an anti-Islamic video to launch an attack on the compound. The initial assumption—by everyone, not just Clinton—that this was part of a regional pattern of violent demonstrations was understandable, not at all conspiratorial…and even if it was part of an Obama plan to low-ball the continuing threat of Al Qaeda, that is a matter of politics, and it pertains not at all to deaths in Benghazi.

Clinton laughed when the unfortunate Martha Roby asked her if she slept alone that night. Roby, stranded on planet wingnut, didn’t understand why the Secretary and more than a few others in the room were laughing. They were laughing at you, Ms. Roby, because the moment summed up the true nature and toxic intent of this witch hunt. 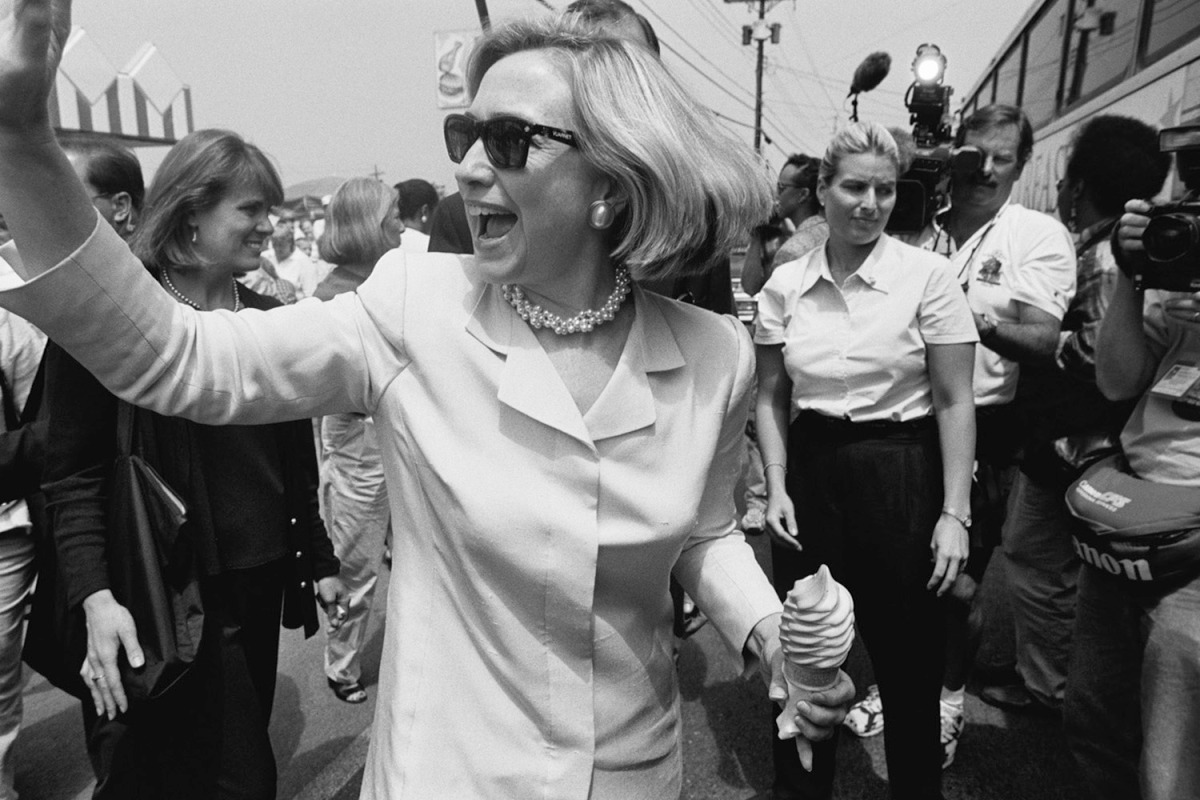 With an ice cream cone in hand, Hillary waves to the crowd in Weedsport, New York, as she heads to the Harriet Tubman Home for the Aged in Auburn, New York, one of the stops on her Save America's Treasures tour, July 14, 1998.
Diana Walker—Contour by Getty Images for TIME 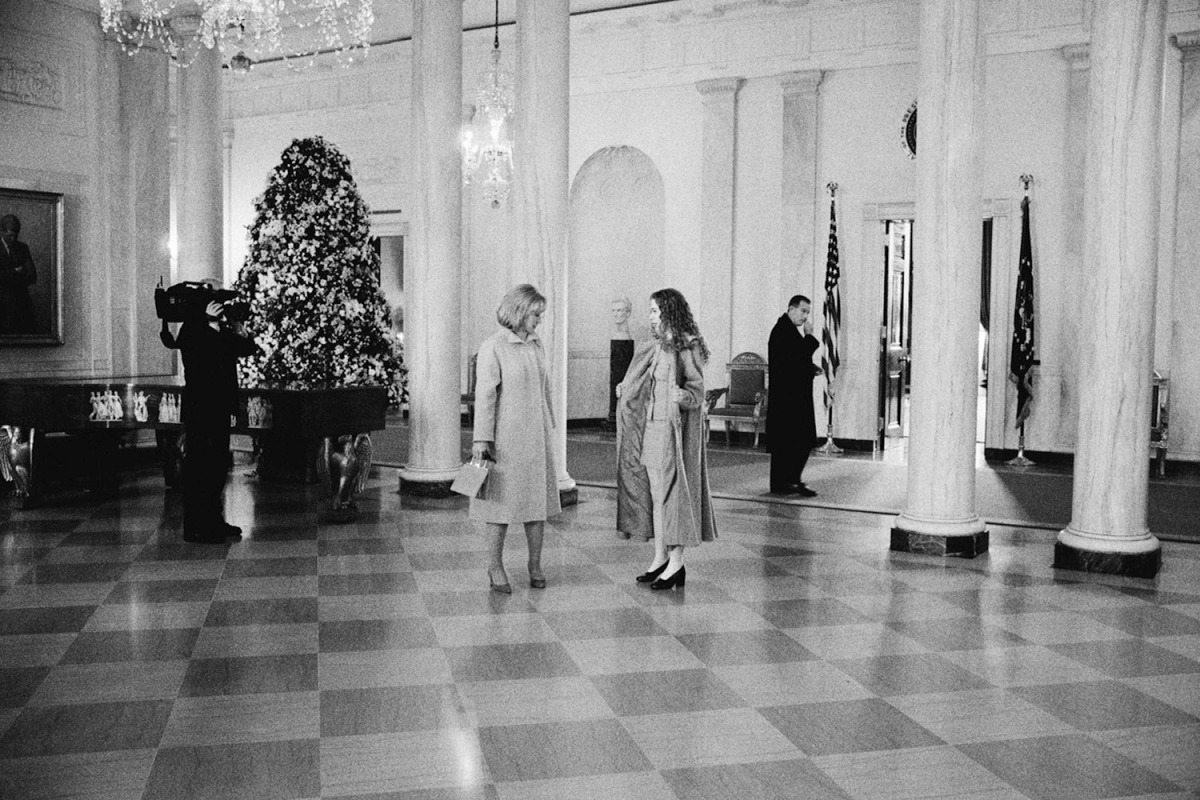 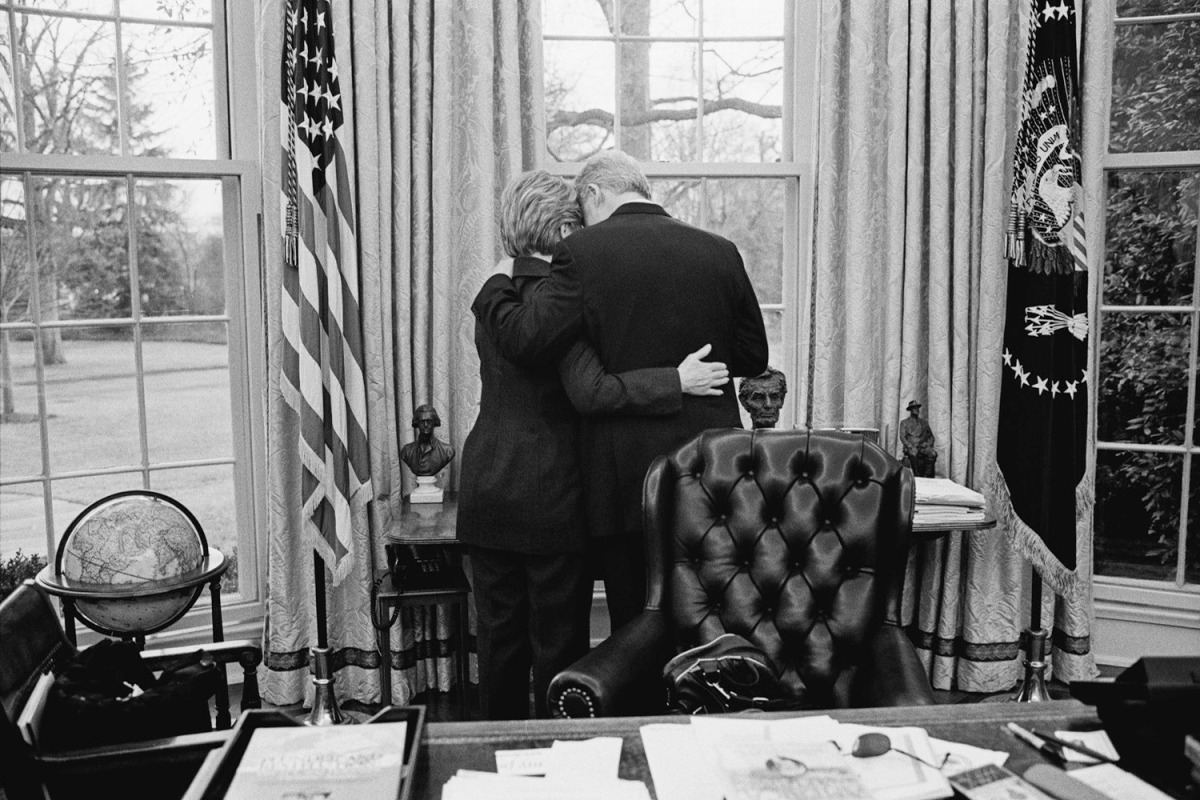 The President and the First Lady Share a private moment, one of their last in the Oval Office. Jan. 11, 2001.
Diana Walker—Contour by Getty Images for TIME 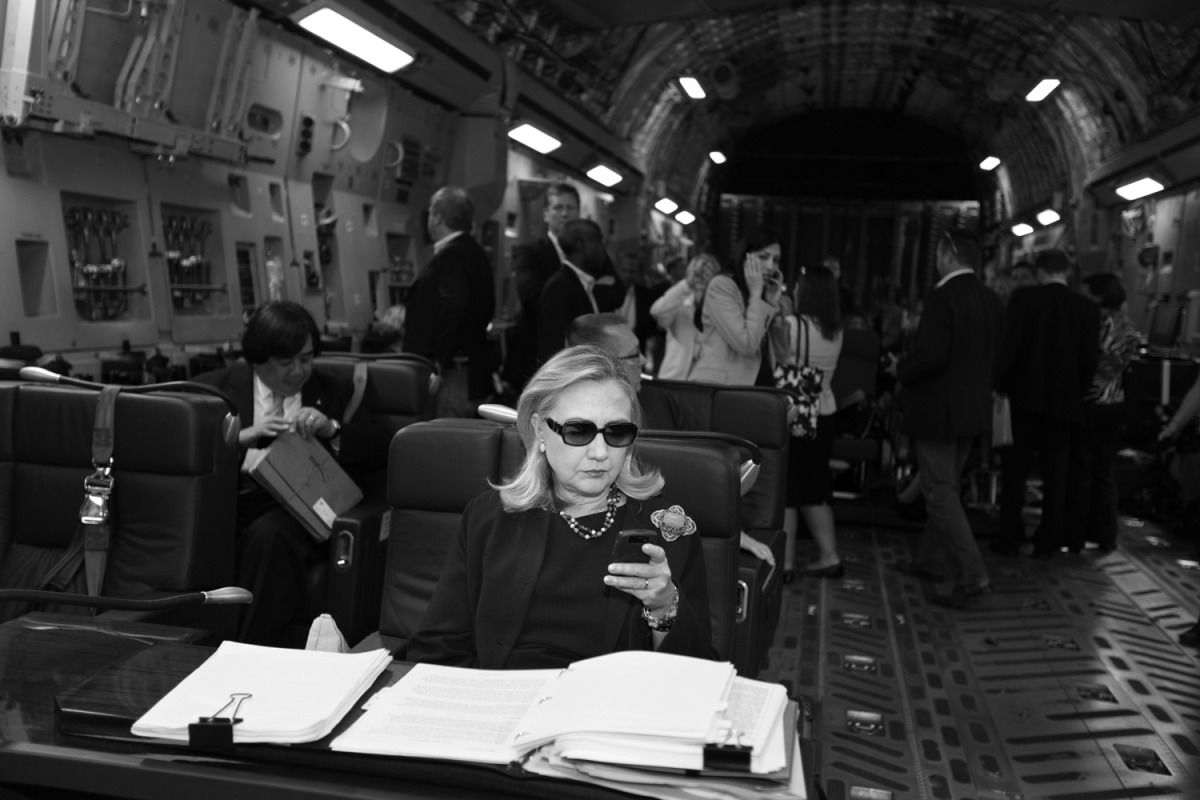 Hillary checks her messages upon departure from Malta for the as-yet-undisclosed location, Tripoli, Oct. 18, 2011. This photo was turned into a meme that circulated around the world.
Diana Walker—Contour by Getty Images for TIME 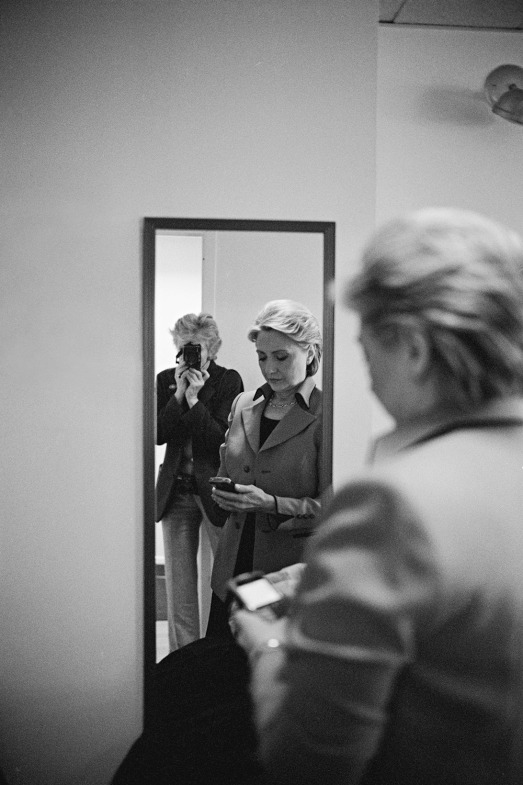 Before an appearance with David Letterman, Hillary checks her BlackBerry while Diana Walker takes their picture. Feb. 4, 2008.
Diana Walker—Contour by Getty Images for TIME 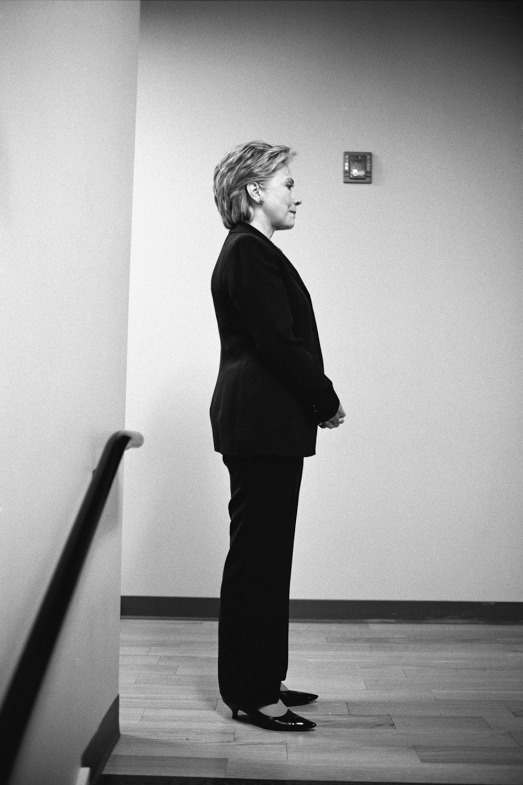 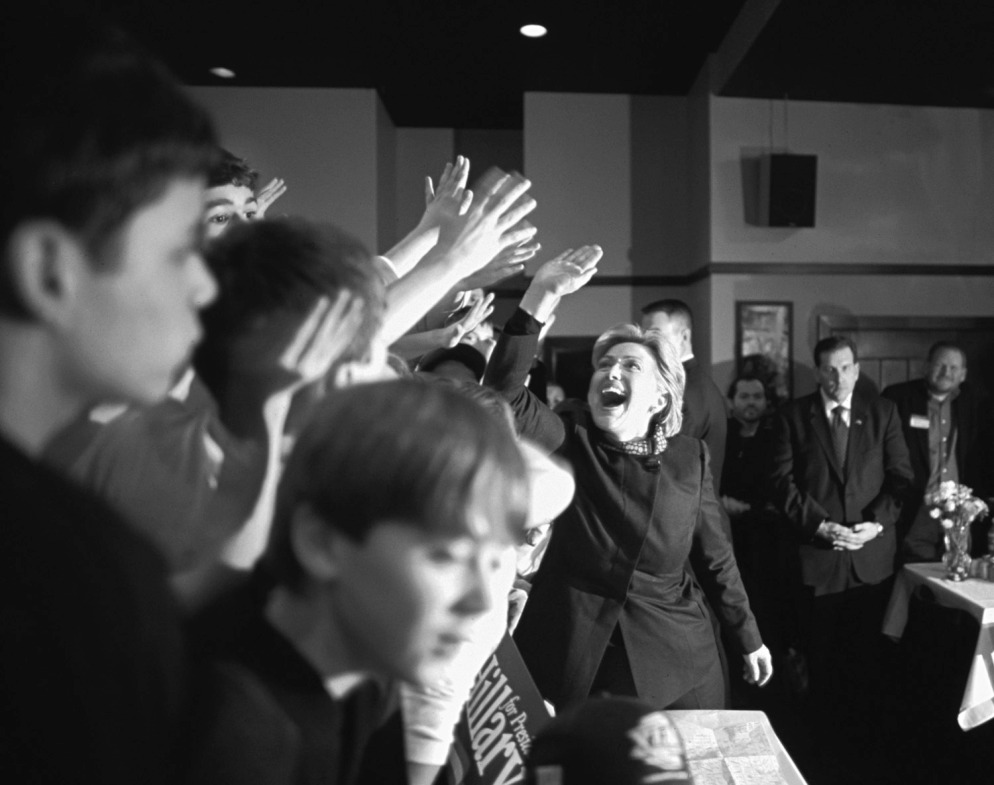 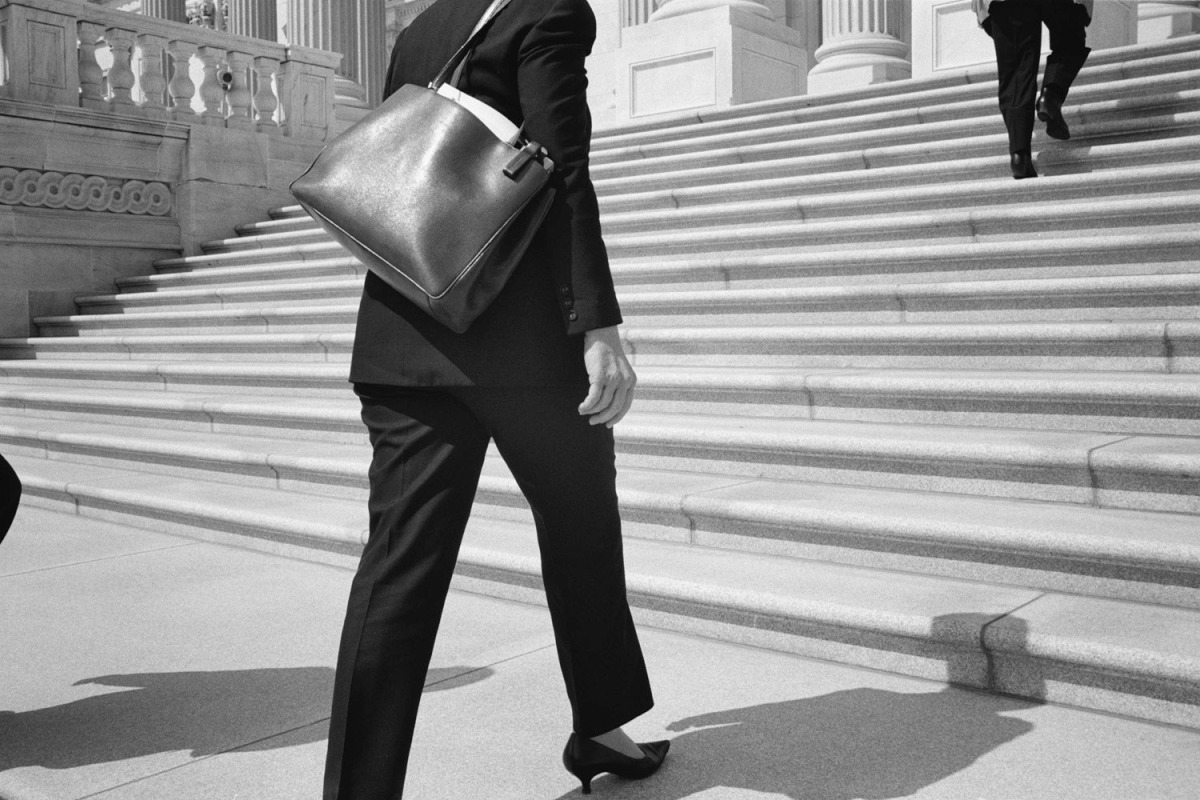 Hillary walks up the steps of the US Capitol to meet with Senate leaders. May 16, 2006.
Diana Walker—Contour by Getty Images for TIME 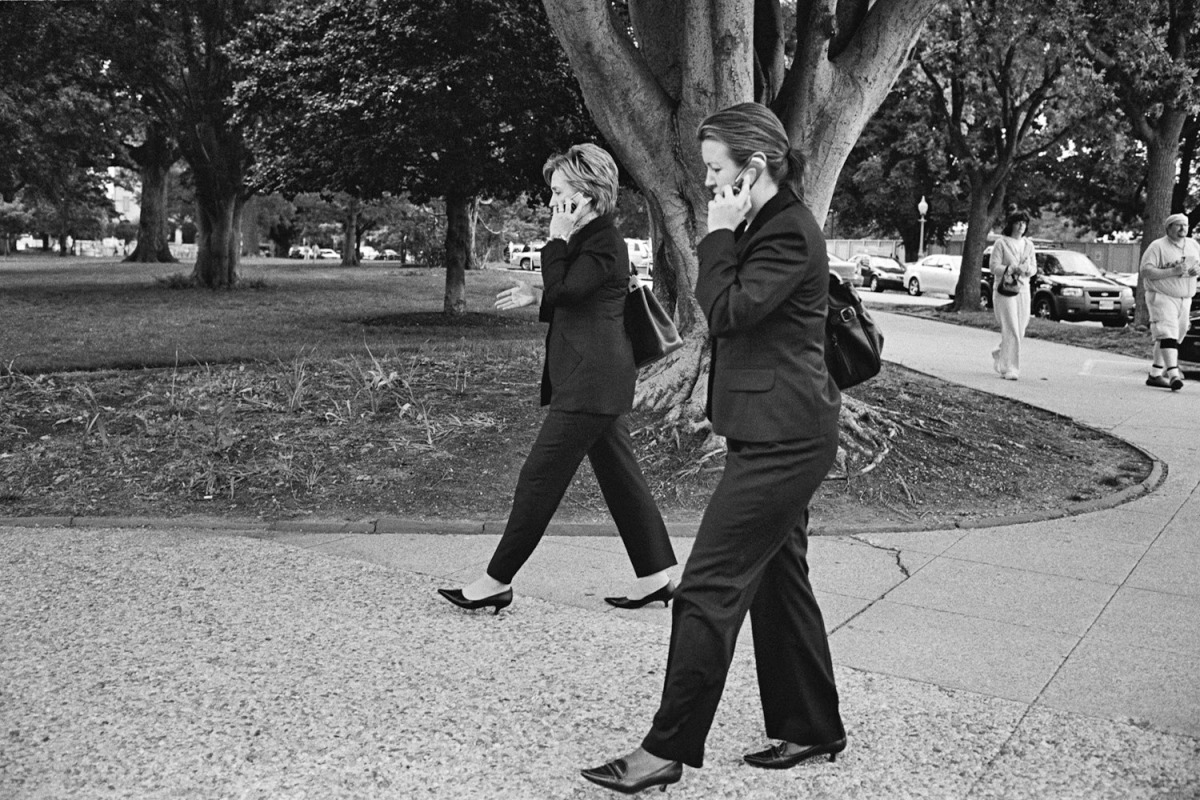 Hillary enters a Super Bowl party at a bar and grill in St. Paul Minnesota, where she watches the New York Giants win the game, Feb. 3, 2008.
Diana Walker—Contour by Getty Images for TIME
1 of 9
Advertisement