After more than a year of anemic returns, McDonald’s appears to be enjoying a rebound, with its shares hitting a unprecedented high on Thursday following CEO Steve Easterbrook’s announcement that the company’s sales climbed last quarter.

By lunchtime Thursday, McDonald’s shares sat at $110.88 — their highest on record — after soaring 7.5% over the course of the morning, Reuters reported. Earlier, Easterbrook had said that the firm’s restaurants reported a collective 4% rise in sales during the third quarter. In the U.S., the company’s largest market, sales climbed nearly 1%; in China, where reports of tainted meat at a Shanghai vendor last July resulted in a briefly limited menu and legions of wary customers, they soared nearly 27%.

“The progress we have made in a short amount of time gives me confidence we’re making the right moves to turn around our business,” Easterbrook told investors in a conference call.

Under Easterbrook’s direction, the fast-food behemoth has spent most of this year attempting to rebrand itself as a “progressive burger company” — one that places a premium on restaurant aesthetics and higher-quality food while offering cheaper prices than trendy fast-casual burger chains like Five Guys and Shake Shack. In March, it announced that it would eliminate antibiotics from its chicken products. Earlier this month, it responded to a longstanding cult calling by offering breakfast items around the clock (a practice already in place at its restaurants in China and other markets). 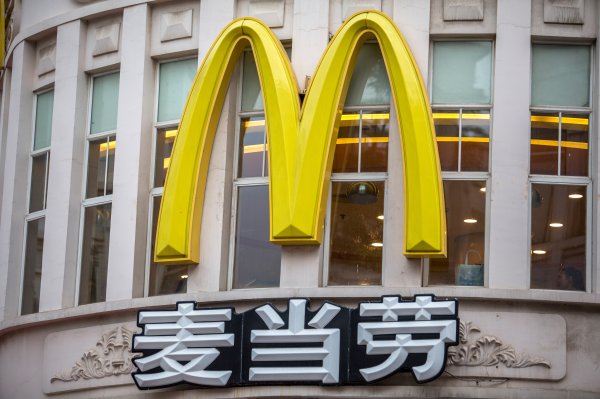 McDonald's Has a New Gray Hamburger That Horrifies the Internet
Next Up: Editor's Pick