The Forgotten History of Mary’s Gospels

On Sunday, Roman Catholic leaders concluded a high-profile Synod in Rome, a council on multiple issues surrounding the family and sexuality. Women’s issues were at the forefront of many of the debates there, and some prelates made quite radical proposals, suggesting for instance that women might be ordained as deacons or (for a less far-reaching idea) that members of women’s religious orders should have voting rights. To some critics, the fact that such debates are under way in 2015 reveals that the Catholic Church is profoundly reluctant to acknowledge women’s spiritual gifts.

But medieval historians might well chuckle at the latest controversies. From a scholar’s point of view, what makes these current arguments so ironic is that for much of the church’s history, it had at its heart a body of texts that together constitute almost a fifth gospel, and one devoted to a woman of near-divine status. However daring that idea sounds today, those once revered documents had a major and lasting impact on the church’s theology.

Very early in the church’s history, believers were fascinated by Jesus’ Mother, and developed stories about her family and childhood. Around the second century, these tales were collected in a wildly influential narrative that optimistic later scholars called the First Gospel, the Protevangelium. As the name suggests, the work closely echoes the canonical gospels, and gives Mary’s “back-story” in ways that shape her story to imitate the miraculous birth and childhood of Jesus himself. The book even implies that Mary was the product of a virginal conception.

Notably, the Protevangelium was written before most of the famous Gnostic Gospels that have received so much attention in recent decades, and which scholars like Elaine Pagels believe to have represented a whole forgotten branch of early Christianity. This “First Gospel” of the Virgin Mary appeared long before most of the famous alternative scriptures that described Jesus’ close relationship with Mary Magdalene.

The Protevangelium shaped Christian thought and visual culture over the next 1,500 years, although often indirectly. Western church leaders thought parts of it were misleading or even heretical, and tried to suppress it. At the same time, they had no objection to other alternative works like the Gospel of Pseudo-Matthew, which presented virtually the exact same material in slightly modified form. Right up to the 16th century Reformation, thousands of art works depicted scenes drawn from the Protevangelium. When we see the young Mary being married to a much older white-bearded Joseph, the story is taken directly from that ancient Christian text – one of the alternative gospels that was never lost, or rather, that has always been hidden in plain sight. The Protevangelium also had a major impact on the Qur’an, and still gives Muslims most of their stories of Mary and Jesus.

Parallels between Christ and Mary were still closer in the accounts that circulated of the Virgin’s departure from the world. No later than the fourth century, these stories were the subject of alternative scriptures and pseudo-gospels that differed substantially in their details, but agreed on a basic narrative: An angel notifies Mary of the imminent end of her earthly life, and the apostles are miraculously gathered as witnesses. In Catholic tradition, she is taken up (assumed) bodily into heaven. Orthodox Christians proclaim that she fell asleep or died, but that on the third day, she was taken up into heaven, when her tomb was found empty. That exactly recalls Christ’s own Resurrection.

Those Eastern accounts include one stunning detail that is often recorded in icons, which can startle a Western observer. As Mary’s life ends, the Jesus who stands at his mother’s bed holds a baby girl, who represents Mary’s soul, in a state of perfect innocence. It is moving and powerful to see Jesus as the loving guardian of the child that was his mother.

Through the Middle Ages, the whole story of Mary’s life was treated as a unified cycle that was explored in countless works of art. If you walked into any church, whether Catholic or Orthodox, you saw stories of the Virgin’s life in paintings and stained glass, carvings and woodcuts. In many countries, those stories were major themes in the so-called mystery plays that laid the foundation for modern European drama. Even today, the Catholic Church holds as dogma (required teaching) the belief in Mary’s Immaculate Conception and her Assumption, doctrines that stem entirely from these Marian gospels.

And gospels they were. These various texts, recording Mary’s beginning and end, exactly follow the pattern of the gospels we find in the New Testament. They served the same devotional function as the canonical Big Four gospels, and for centuries, they were at least as widely known. Only in the 16th century, with the coming of higher standards of scholarship, did the Catholic church become suspicious of those ancient pseudo-gospels.

We often hear charges that Catholic Christianity is obstinately patriarchal and anti-female, a criticism that becomes ever more common as that church stands out from other denominations in its refusal to ordain women. But at the same time, the Church has long acceptance of those alternative scriptures, and the ideas they presented. Whatever the church’s official theologies on the subject, popular devotion has always made Mary, in effect, a female face of the divine.

Philip Jenkins teaches at Baylor University. His most recent book is The Many Faces of Christ: The Thousand Year Story of the Survival and Influence of the Lost Gospels (New York: Basic Books, 2015)

For your security, we've sent a confirmation email to the address you entered. Click the link to confirm your subscription and begin receiving our newsletters. If you don't get the confirmation within 10 minutes, please check your spam folder.
Most Popular on TIME
1
Anonymous Vows to Hack Minneapolis Police Over George Floyd Death
2
Column: White People Need to Understand Whiteness
3
When Rioting Is the Answer 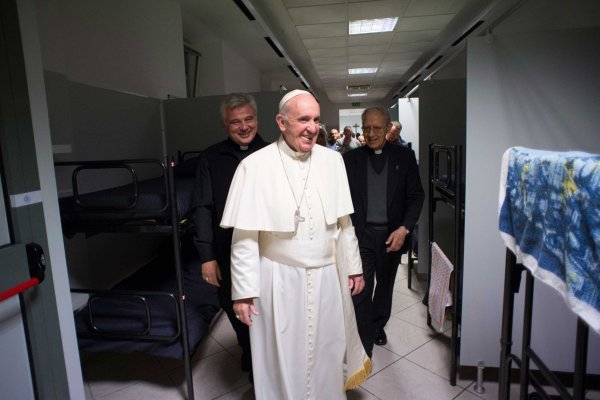