Why Some Restaurants Have Declared War on Tipping

The strip steak at New York City’s Union Square Café costs $35. But if you order it, you’re almost certain to pay closer to $40–and possibly more if you found the server appealing or she introduced herself by name or suggested a great wine. That’s because for nearly 150 years, eating out in America has meant leaving a not-insubstantial tip on the check. (The national average is 15% to 20%.)

But what if it didn’t? A small but prominent group of restaurants across the U.S. are testing that premise, eliminating tipping and making up for the lost cash by raising prices or adopting a service-included charge. They account for a tiny fraction of the nation’s more than 230,000 full-service restaurants, but their ranks are growing. And the latest addition may be the most influential yet.

In October, Danny Meyer said he would get rid of tipping at 13 establishments owned by his Union Square Hospitality Group by the end of 2016. Meyer is a skilled forecaster: he banned smoking long before it was outlawed and founded Shake Shack ahead of the gourmet-burger boom. If he can ditch tipping and still turn a profit, plenty of others could follow.

“There are a ton of other restaurateurs that are all talking about doing this,” says chef Tom Colicchio, who has replaced tips with a service fee during lunch at his New York restaurant Craft. “Danny clearly just blew the cover off.”

Why fight a custom in place since the late 19th century, when Gilded Age aristocrats adopted the European practice to flaunt their status? In short: money and control.

The amount we tip is ultimately tied to how much a meal costs. And since prices have been rising, tips have gone up along with them–good news for the waiters, hosts and other staff members who receive gratuities (many of whom are wary of losing that income). But a confusing maze of laws bars most of the people who actually cook your food from sharing in those tips, which has created a vast pay gap. At a high-end restaurant, a waiter can make six figures a year. A line cook at the same place is unlikely to earn more than $35,000.

The abolitionists say that ending tipping will let owners restore some pay balance between the two. “The effort that goes into an amazing bowl of risotto,” Meyer says, “should not be diminished next to the effort to pull a cork from a bottle.”

Eliminating tips could also help the owners’ bottom lines. Even for successful full-service places, profit margins are rarely higher than 3%. Restaurants can better adjust to new federal rules expanding paid sick leave and overtime eligibility, along with minimum-wage increases, if they can use the money that had gone into servers’ pockets to cover some of their expenses.

The other big reason owners want to get rid of tipping is the one on which they’ll face the most resistance. Many proprietors are tired of patrons’ deciding how much their staff makes–especially after they’ve had a few drinks. The current system relies on customers to determine much of what a server gets paid, since most states have a lower minimum wage for workers who receive tips. And their methodology is not exactly rigorous. Although most Americans say they tip as a reward for good service, multiple studies have shown that that actually has little bearing. What does increase tips? Displays of warmth and affection, for one. A light touch, smiling widely, squatting by a table instead of hovering over it, and writing “thank you” on the check have all been found to measurably boost tips. Meanwhile, subjective views of age, gender and race can heavily influence what diners give.

“The responsibility of creating income should not fall to the whim of people who are patronizing the restaurant, which is completely antithetical to a profession,” Meyer says. “You don’t tip your doctor if she cures you, and you don’t tip your architect if the house doesn’t fall down.”

But the practice won’t go down without a fight. Tipping has a powerful hold in America, partly because we see it as our right, a way to reward hard work and punish laggards. Mark Bodenstein found that out when he ended tipping at his restaurant in Covington, Ky., NuVo, in June. “It was literally like we were offending people,” Bodenstein says. After Labor Day, he brought tips back. 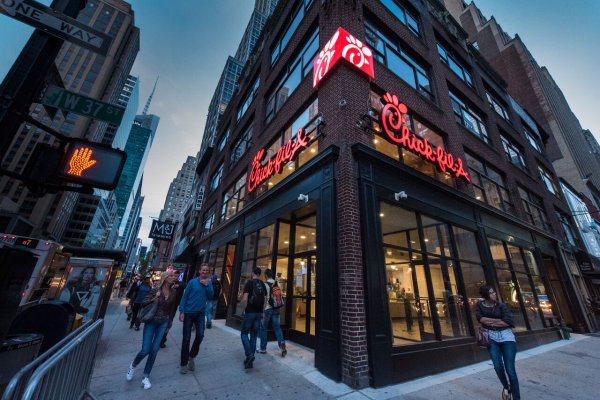 This Is Chick-fil-A's Plan to Invade New York
Next Up: Editor's Pick