South African police have used stun grenades and tear gas to disperse hundreds of students who marched on the parliament precinct in Cape Town on Wednesday to decry a planned tuition hike at more than a dozen universities — the latest in a string of protests touted as the nation’s largest student demonstration since the end of apartheid.

Since Oct. 13, following the announcement that the country’s universities hoped to increase fees by as much as 11.5%, South Africa’s university students have taken to their campuses and to the streets, at times violently, Reuters reports. The assemblies, which collectively go by the hashtag moniker #FeesMustFall, have effectively shut down several of the country’s top institutions of higher education.

“What we wanted is the public to see and hear our cries,” Mcebo Freedom Dlamini, a student leader at Johannesburg’s University of the Witwatersrand, told the local Mail & Guardian last week. “To our parents, we’re sorry that we’re doing this, but we had to do it because our mothers cannot afford to bring us here next year.”

After more than a week of localized unrest, demonstrators assembled on Wednesday at the Houses of Parliament in Cape Town, where President Jacob Zuma — who has not commented on the protests — was attending a speech by Minister of Finance Nhlanhla Nene concerning the country’s interim budget. The situation escalated when students decided to storm the parliament compound, spurring the police to intervene.

“We were pushed back by police with force. The stun grenade was shot right next to my ear,” Motheo Lengoasa, a student at University of Cape Town, told Reuters.

As protesters and authorities clashed outside, Nene delivered a grim state of the union for Africa’s most developed and second largest economy. As economic growth languishes and the rand, South Africa’s currency, suffers, public funding for universities has fallen, forcing the institutions to hike student fees to compensate. Quartz noted that state higher education funding in South Africa is markedly lower than in other emerging markets, such as Russia and Saudi Arabia.

At present, a university education in South Africa costs around the equivalent of $7,400 a year, which, by one economist’s calculations, 95% of all South Africans cannot afford. For many students, the policy is one of discrimination, given the income disparity between the country’s white and black populations. Though most of the students gathering in the streets this week are too young to remember South Africa under apartheid, they have summoned motifs of the era to denounce both the tuition hike and the official response to the demonstrations.

“This looks like 1976 all over again,” Lengoasa said, alluding to a June 1976 protest against a curriculum shift that introduced Afrikaans — the “language of the oppressor,” as Nobel laureate Archbishop Desmond Tutu called it — as the medium of instruction at South Africa’s schools. During that demonstration, police killed at least 69 students.

The ongoing movement is the second major student demonstration in South Africa this year. In March, students at the University of Cape Town earned global attention as they rallied to demand the removal of a campus statute of the Cecil Rhodes, the controversial late British colonialist. 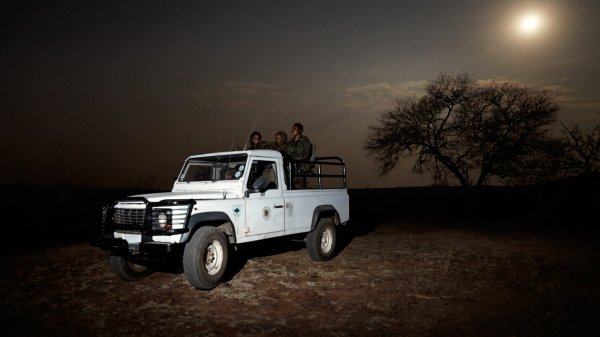 Inside the New Weapon Against Poachers
Next Up: Editor's Pick