This Map Shows Why Capital Punishment Is Declining in America

Since capital punishment was reinstated in the United States in 1976, executions have never been harder for states to carry out. Lethal injection drugs are scarce. Lawsuits over lethal injection protocols are rampant. And public officials are routinely calling for moratoriums and temporary stays of execution to avoid the next execution gone awry.

Here is a snapshot of the capital punishment landscape in America today, including where the practice has been abolished, where lethal injections are being delayed and which states are still actively carrying out executions: 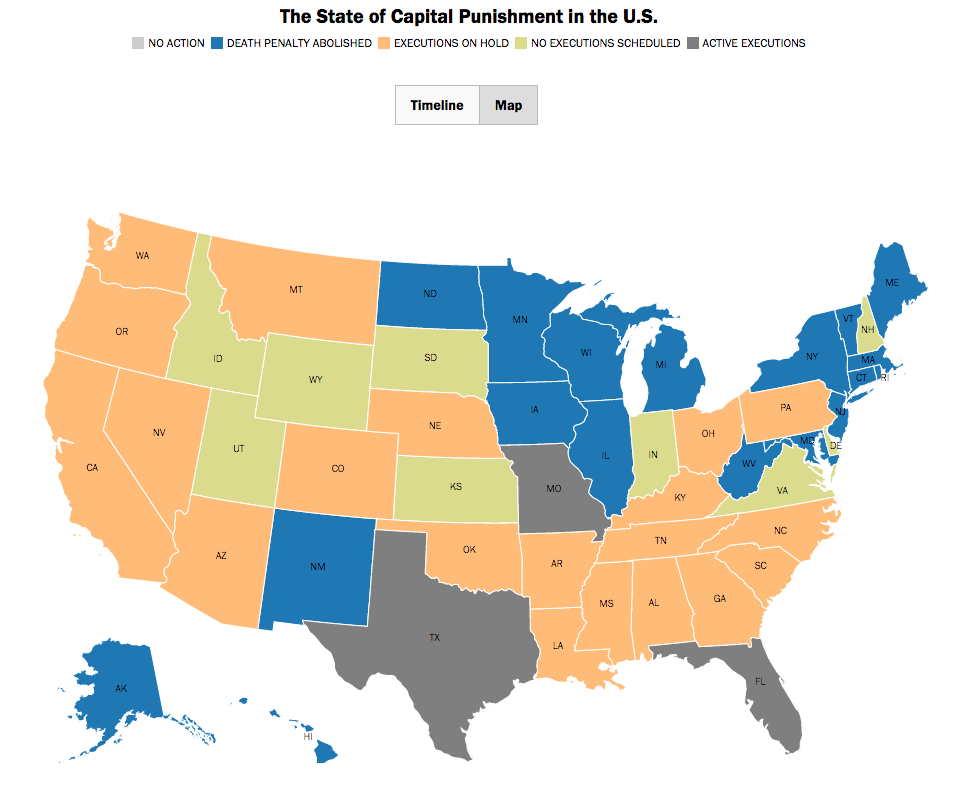 The latest chapter in America’s fraught relationship with capital punishment began around 2010, when a nationwide drug shortage coupled with anti-death penalty groups pressuring pharmaceutical companies to stop selling drugs for lethal injections sent states scrambling to figure out new drug protocols. Since then, three executions in Ohio, Oklahoma and Arizona have been widely considered botched after inmates appeared to be improperly sedated. All three states used the sedative midazolam, which had not previously been used in executions and was at the heart of a Supreme Court case in April over the constitutionality of Oklahoma’s drug protocol.

In the last year, numerous lawsuits have challenged these revised drug combinations while states struggle to obtain proper drugs to carry out lethal injections. Oklahoma delayed an execution on Sept. 30 after a drug mix-up and later said it used the wrong drug in an execution in January. Oklahoma’s executions are currently on hold until next year. On Oct. 19, Ohio announced it would extend its moratorium on capital punishment until 2017 because it had trouble finding the drugs it needs. Nebraska’s state legislature voted to abolish the death penalty altogether in May, but a recent petition drive has succeeded in getting the issue on the ballot as a statewide referendum in 2016.

The map above shows more detail on what is happening state-by-state across the country.

U.S. Soldier Killed During Rescue Mission in Iraq
Next Up: Editor's Pick