WASHINGTON, DC - OCTOBER 20: Rep. Paul Ryan (R-WI) speaks following a meeting of House Republicans at the U.S. Capitol October 20, 2015 in Washington, DC. Ryan has said he is willing to be the next Speaker of the House if all House Republicans endorse him for the position. (Photo by Win McNamee/Getty Images)
Win McNamee—Getty Images
By Charlotte Alter

Wisconsin Republican Rep. Paul Ryan said Tuesday night that one of the main conditions under which he’d be willing to serve as House Speaker is that he continue to be able to spend time with his wife and three young children. “I cannot and will not give up my family time,” he said, “Janna and I have children who are in the formative, foundational years of their lives.”

But Ryan’s line in the sand drew attention Wednesday to his numerous votes against measures to ensure Americans can spend needed time with their families, and prompted charges of hypocrisy from his critics in the liberal blogosphere. “Paul Ryan Wants To Preserve His Work/Family Balance While Making It Harder For Poor Parents,” blared a headline on the liberal site ThinkProgress. “Paul Ryan, Opponent Of Paid Family Leave, Demands Congress Respect His Need For Family Time,” the feminist blog Jezebel said.

Ryan’s demand had nothing to do with government family leave policies; it centered instead on the traditional expectation that Speakers of the House spend large amounts of time on the road to raise money for their colleagues. But he does have a documented history of voting against Democratic-sponsored measures supported by family leave advocates.

In 2009, he voted against providing paid family leave to all federal employees, a bill which eventually passed the House 258-154, mostly on party lines, but died in the Senate. The budget he drafted in 2014 would have eliminated the Social Services Block Grant, cutting $16 billion of federal funding for child-care subsidies for low-income families. And this year, the Family Medical and Insurance Leave act, which would create a national paid leave program, was introduced by Democrats and referred to the House Ways and Means Committee, of which Ryan is the chair. There’s been little progress on it since, and it’s unlikely to pass the Republican-controlled congress.

Only 13% of workers were eligible for paid family leave in 2013, according to the U.S. Department of Labor. And while almost 60% of workers have access to unpaid family leave, many low-income families who usually can’t afford to take time off without pay.

“Throughout his career, Congressman Ryan has placed a premium on spending time with his family,” a Ryan spokesman said in a statement. The spokesman also noted that Ryan is currently a cosponsor of the Working Families Flexibility Act, which would allow workers to receive time off for working extra hours instead of time-and-a-half overtime pay. “This legislation would help people achieve a healthier work-life balance and maintain current employee workplace protections in law,” the Ryan spokesman said.

The bill first passed the GOP-controlled House in 2013 but was not brought up in the then-Democratic-controlled Senate. Supporters argued that the bill offered families more flexibility, but there was strong opposition from liberals, including from unions. The National Partnership for Women & Families opposed the bill, and senior advisor Judith L. Lichtman testified in 2013 that it would “leave workers with neither pay nor time,” according to the Washington Post.

Ryan is no stranger to family burden. When his grandfather died young of a heart attack, his family took in and cared for his grandmother, who suffered from Alzheimer’s. Then his father died of a heart attack; Ryan was just 16 when he found his father’s body in their family home. To help make ends meet, Ryan worked at McDonalds, amongst other odd jobs. Every morning he gets up at the crack of dawn to do a grueling P90x class because he’s convinced he won’t live to see 60. His father, grand father and great-grandfather didn’t. 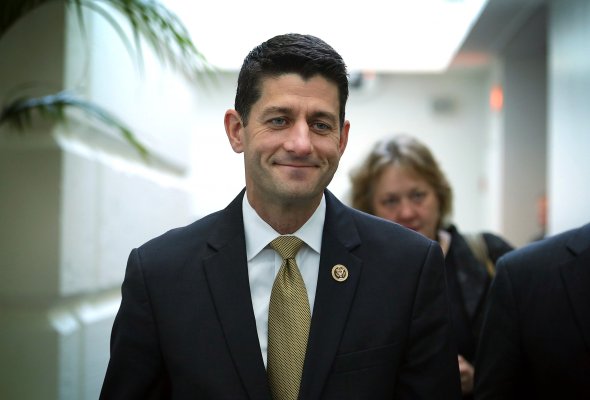