Luke, I am your running back.

In light of the somewhat perplexing decision to release the new Star Wars: The Force Awakens trailer during Monday Night Football this week, Conan O’Brien took it upon himself to imagine what the typical Star Wars fan would actually look like playing football.

In the clip, fans dressed as Darth Maul, Chewbacca, Princess Leia, Boba Fett, and several other characters from the Star Wars franchise try their best to get down the rules of football. It starts out with hitting a basketball around with lightsabers, eventually turning into playing with an actual football that is still in its original packaging.

Princess Leia and Darth Maul both get very caught up in the game, as evidenced by their over-exuberant touchdown celebrations, but C-3PO would rather sit on the field and try to decode that trailer.

The clip highlights the bizarre demographic choice for ABC to air the new Star Wars trailer during a football game. It seems to go against the stereotypes that every high school movie sets up: the jocks and the nerds are enemies. But with ticket sales for Star Wars: The Force Awakens breaking sales records and crashing websites, more than a few football fans are clearly also Jedi wannabes.

Hey Conan, maybe for the next video we can see football fans going to the Star Wars premiere? I mean, Darth Maul is pretty much sporting the face paint football fans love so much already. 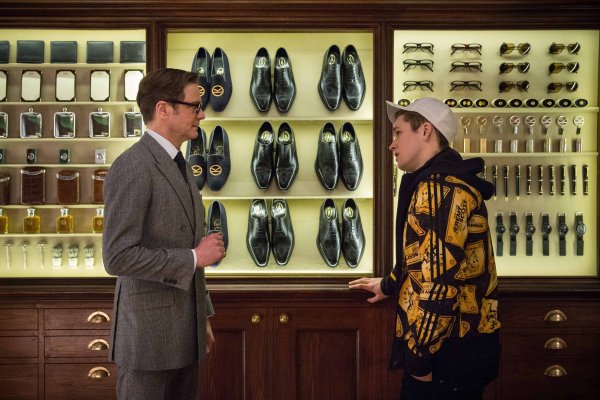 Kingsman Sequel Set for Summer 2017
Next Up: Editor's Pick