The Science That Made the Gateway Arch Stand

There are two features that any great monument must possess: simplicity and permanence. This was the thinking that architect Eero Saarinen used when designing the “Gateway Arch to the West,” which celebrates its 50th anniversary Oct. 28. The arch is perched on the edge of the Mississippi where an early trading outpost stood, which was frequented by pioneers, fur traders and explorers before heading westward. In the 1930s, city leaders wanted to transform this decaying site with a monument to honor those who “won” the west. The process from choosing a design—Saarinen filed his application in 1947—to completing construction in 1965 took decades. But, the work that made the Gateway Arch possible took centuries.

For the “simplicity” half of the equation, Saarinen gained inspiration by looking to the nation’s capital. He surmised that timelessness arose from geometric forms—the Washington Monument is an obelisk; the Lincoln Memorial is a rectangle; and the Jefferson Memorial is a circle in a square. So, Saarinen selected an arch—specifically, a catenary arch, a special geometric form that had long moved mathematicians and masons. A catenary arch is the shape that is made when a chain hangs freely from two supported ends. It occurs frequently in everyday life, everywhere from draping power lines to necklaces. When inverted, this arch supports its own weight, even at the Gateway Arch’s towering height of 630 ft.

With this appointed shape, Saarinen next sought to find the right building materials to make it. Though nature had provided the shape of the arch, the material was the product of human effort.

Rust never sleeps, as songwriter Neil Young once wrote. So, the best way to stop it is to prevent it. Finding a metal that won’t succumb to the elements has been a long-standing human quest. One of the oldest attempts sits unmarked in a courtyard in India—the Iron Pillar of Delhi. What makes this unremarkable 22-ft. column remarkable is that at 1,600 years old it exhibits no rust. Only recently have scientists uncovered its mystery. It contains phosphorus, which forms an atomically-thin protective coating—what scientists call a passivation layer—over the iron.

The path to developing the metal that would eventually be used to keep the Gateway Arch shining was circuitous at best. The secret to making lasting metals puzzled some of the world’s greatest minds. Even Michael Faraday, one of history’s best scientists, began his career investigating new kinds of steel in the 1820s and had only limited success.

By the 1870s, a few inventors had ideas that seemed promising, but their patents went unfiled. Then, in the 1890s, the scientist Sir Robert Hadley turned his attention to the problem. He investigated the effects of mixing steel—which is itself made by combining iron and carbon to maximize strength—and chromium, an element that had been discovered in the 1700s by a French chemist. He concluded that the chromium would lessen steel’s ability to fight corrosion. He was wrong.

It wasn’t until the early 20th century that scientist Harry Brearley would correct that mistake: actually, chromium does the opposite of what Hadley thought. It creates a thin layer of chromium oxide on the surface of the steel, which hinders water from combining with the iron to create rust. As a result, Brearley concluded, it makes the steel “rustless”—or, as we know it today, “stainless.” Brearley first commercialized it for use in cutlery, which was announced in The New York Times in 1915, as such, the stainless steel in the Gateway Arch is the same as in a household fork.

In the finished arch, metal plates as thick as four nickels are held together with miles of welds, making the arch’s exterior weigh nearly 900 tons. (For comparison, the Chrysler Building has a 27-ton stainless exterior.) Today, the arch stands strong although it contends with dirt, discoloration and the chemical pollution it faced from industrial emissions during its early years, before legislation cut back on air pollution. The survival of the arch is a testament to the power of human design and imagination—and also to the power of chemistry.

Ainissa Ramirez is a materials scientist and author (Newton’s Football and Save Our Science). She hosts a 2-minute science podcast called Science Underground. 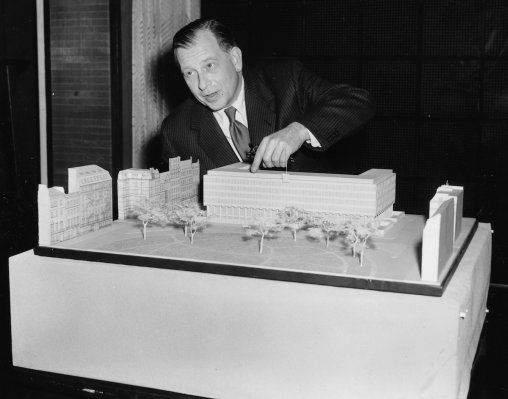 How Eero Saarinen Became One of America’s Best-Known Architects
Next Up: Editor's Pick