How The Diary of Anne Frank First Made It to the U.S.

It has been over 60 years since The Diary of Anne Frank was first published in the United States. Frequently listed among the most significant books of the twentieth century, the classic account of the 13-year-old girl who hid from the Nazis with her family in an attic in Amsterdam has long been an international bestseller. Many came to know the story in grade school, or through the adaptations for stage and screen. Few realize how difficult it was for the story to be published, and how even more difficult it was to get the book adapted for the stage. Several collections across the Harry Ransom Center help to tell this story.

After his liberation from Auschwitz in 1945, Anne’s father Otto Frank discovered he was the sole survivor of the family. He was given his daughter’s diaries by Miep Gies, a family friend who had helped hide the Franks and had recovered the documents from the house shortly after the family’s arrest. (The diaries themselves are now part of the permanent collections of the Anne Frank House in Amsterdam.) Frank edited the diaries himself, and had them published in Dutch under the title Het Achterhuis (The Secret Annex) by Contact Publishing of Amsterdam in 1947.

The report is notable for a number of reasons. First, it reflects a growing fatigue in the United States regarding Holocaust stories only five years after the end of the war. The full extent of the atrocities of the Nazi regime had yet to be disclosed and there was a belief that, in the post-war period, focusing on such dark stories made it impossible for society to move on. The document is also a great example of how publishing houses reviewed manuscripts, and an inside look into how sometimes they got it wrong.

Within a year, the American rights to the Diary of Anne Frank were picked up by Doubleday (Knopf and Doubleday would eventually merge in 2008), but Doubleday delayed publication. The editors of Commentary magazine, published by the American Jewish Committee, learned of the Diary and wrote to Doubleday requesting permission to publish excerpts of the manuscript. According to the records of Commentary, held at the Ransom Center, Doubleday initially refused, stating that they had hoped to syndicate the story “in a magazine that pays top prices.” When they failed to find a magazine, Doubleday returned to Commentary, who paid $250 for the serial rights and copyright credit. Thus, the first time The Diary of Anne Frank appeared in print in the United States was in the May and June 1952 issues of Commentary. The response was enthusiastic, and Doubleday moved forward with publishing the full manuscript. A document in Commentary’s papers notes that “no other manuscript has ever created comparable excitement in Commentary and the editorial secretaries actually fought over the privilege of typing it.”

After the overwhelming success of the book version of The Diary of Anne Frank, Otto Frank turned his attention toward a stage adaptation. Novelist Meyer Levin wrote one adaptation, but when Frank couldn’t find a producer for it, he looked for other adapters. Among them was Lillian Hellman, who declined the opportunity. According to an interview David Goodrich had with Garson Kanin, who directed the Broadway production, Hellman said, “I think it is a great historical work which will probably live forever, but I couldn’t be more wrong as the adapter. If I did this it would run one night because it would be deeply depressing. You need someone with a lighter touch.” Hellman ultimately recommended Frances Goodrich and Albert Hackett, who would go on to write the Pulitzer Prize–winning drama. Hellman, for her part, invested in the producing company for The Diary of Anne Frank. Her contract and investment statements are included in her papers at the Ransom Center. The play opened on Broadway on October 5, 1957, and ran for over 700 performances.

Read more about Anne Frank and see images from the archives here, at the Harry Ransom Center Cultural Compass blog.

For your security, we've sent a confirmation email to the address you entered. Click the link to confirm your subscription and begin receiving our newsletters. If you don't get the confirmation within 10 minutes, please check your spam folder.
Most Popular on TIME
1
Could Amsterdam's New Economic Theory Replace Capitalism?
2
Trump's Presidency Divided Families. What Happens to Them Now?
3
Bernie Sanders Mittens Memes Take Over Social Media 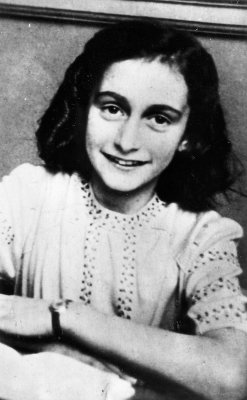