Why Obama Should Walk Away From the Peace Process in Israel

Alon Gratch is an Israeli-American clinical psychologist and author of The Israeli Mind.

The recent outbreak of violence in Israel will undoubtedly add tension to the already thick air surrounding President Barack Obama’s meeting with Israeli Prime Minister Benjamin Netanyahu next month in Washington. Since the only long-term answer to this reoccurring crisis is a political resolution of the Israeli-Palestinian conflict, Obama should use this meeting as a strategic pivot to a policy shift intended to get Israel to once again say yes, and this time mean it, to a two-state solution.

The president should take a page from former Secretary of State James Baker, who understood the Israeli mind better than any other American diplomat. Israel is a nation whose history and existence have been based on defiance—defiance of anti-Semitism, of the passivity of Jewish diaspora, of the unfavorable facts on the ground in historic Palestine, of world pressure and of the surrounding Arab states.

Baker understood the oppositional tendency that therefore took hold of the Israeli national character. He knew there was no point trying to persuade a reflexively nay- saying Israeli. This is why he referred to Prime Minister Yitzhak Shamir as “Dr. No” and made his famous 1990 statement to Congress that the Israelis should call the White House at 1-202-456-1414 when they are serious about peace.

A couple of years later, Baker took this implied threat of abandonment to another level, announcing that the U.S. would withhold loan guarantees unless Israel agreed to halt settlement expansion. Israel’s right-wing government lost the next election, and a new Labor government announced a settlement freeze.

If Obama wants Israel to once again embrace a two-state solution, he should walk away from “the peace process” and let Israel face the consequences of its intransigence on its own. Obama need not go as far as Baker did, nor can he afford, given American interests in the region, to downgrade military and economic cooperation with Israel.

But withholding American support in the U.N. and other international forums would engage Israel’s existential fear and need for legitimacy, which lay just beneath its tough, defiant exterior. This could force Netanyahu to replace the far-right elements of his coalition with the moderate Zionist Camp. Or, Netanyahu could lose his slim majority in the parliament, and the Zionist Camp could form a new government. Either option would represent a better chance for a two-state solution.

This policy shift must be coupled with offering Israel real protection against the threat of attack from Iran. In exchange for demonstrably embracing a two-state solution—for example, by freezing all settlements activity—Obama could give Israel a guarantee of a military option should Iran shirks its obligations under the nuclear deal with the West.

The crisis clouding American-Israeli relations at the moment offers a great opportunity: Obama has the chance to offer Israel a solution tailor-made to the Israeli mind. 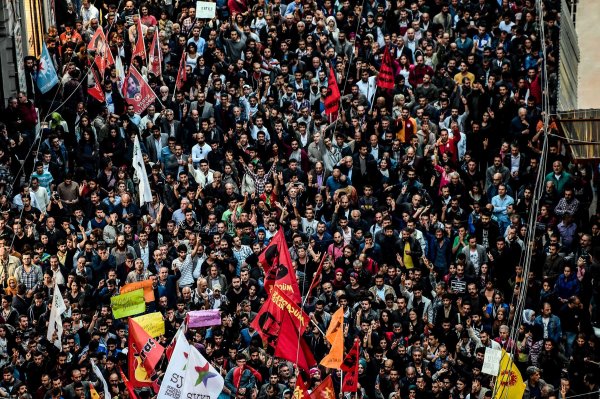 The Ankara Bombing Is a Reminder That Safety Is Relative
Next Up: Editor's Pick