Scientists Have Found a Comet That Can Get You Drunk

Chances are you wouldn’t travel halfway across the solar system for a drink. But if you were inclined to make the trek, it’s nice to know you’d find an open bar. Better move fast though; happy hour at this place won’t occur again for another 8,000 years.

The watering hole question is better known as Comet Lovejoy—which, let’s be honest, does sound like a cracking good name for a singles joint, and that turns out to be entirely appropriate. According to a new study in Science, Lovejoy is the first and so far only comet known to include alcohol and sugar—two must-haves in plenty of drinks—in its list of chemical ingredients.

Until recently, the most popular if least scientific way to describe comets was “dirty snowballs,” a fair enough term, since they are mostly made of rock, dust and water ice. But there’s a lot more in that chemical mix as well. Like so much in the solar system and space at large, comets are rich in the stuff of organic chemistry—carbon, oxygen, hydrogen and more complex molecules and compounds like methane, formic acid, acetone and amines. So common are the complex organic molecules (COMs) riding along on comets that plenty of astronomers believe we owe the very existence of life on Earth to cometary bombardments bringing the critical ingredients of biology with them.

But not every comet COM has been fully identified, and Comet Lovejoy provided an excellent opportunity to dig deeper into the mystery. First spotted in August, 2014 by Australian amateur astronomer Terry Lovejoy, the comet that now bears his name was, at the moment of its discovery, barreling in from deep space, on the way to its closest approach to the sun, which occurred on January 30, 2015.

On cosmic scales, a close approach to the sun is also a close approach to Earth. That made it a good time for a team led by astronomer and comet specialist Nicolas Biver, of the Laboratory for Space Studies and Astrophysics Instrumentation in Paris, to turn a 30-meter (98 ft.) radio antenna Lovejoy’s way and conduct spectrographic studies of the chemistry it detected. The comet did not disappoint. Biver and his team detected 21 organic molecules, 19 of which had been identified on comets before, and two of which hadn’t: glycolaldehyde (otherwise known as CH2OHCHO, and much better known as simple sugar) and ethanol (C2H5OH, or alcohol—specifically the type that gives every drink you’ve ever had its intoxicating kick).

Like all good mixologists, the researchers paid mind not just to the presence of the chemicals, but to exactly how much of the good stuff goes into the shaker. By the standards of a bar, the drinks were pretty weak. Sugar was present in the comet in just .016% the concentration water was, and alcohol in just 0.12%. So, one part alcohol to 1,000 parts water. Feel free not to tip.

But it was the presence of any alcohol or sugar at all that really moved the scientific needle. The reason it will take Lovejoy 8,000 years to come back around is because it’s what’s known as a long period comet, one that comes at us from the Oort Cloud, a massive sphere of comets and other icy bodies surrounding the solar system and stretching about a quarter of the way to the nearest star. The Oort Cloud and a smaller, interior band of comet-like objects known as the Kuiper belt are the residue of the primordial dust that gave rise to the sun, planets, moons and every other object in the solar system.

The more organic chemistry we find in artifact objects like those in the Oort Cloud and Kuiper Belt, the harder it is to believe that life as we know it is terribly rare—much less a cosmic one-off limited to Earth and Earth alone. Simple biology may require nothing more than chemistry plus energy plus sufficient time to slow-cook. Not all forms of that biology would be ones capable of enjoying goodies like alcohol and sugar. But for the form we know best—ourselves—Lovejoy’s chemistry is surely more proof that this is the best of all possible universes. 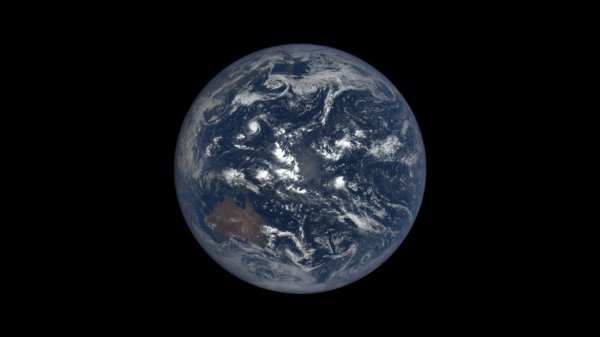 Now You Can See New Pictures of Earth from Space Every Day
Next Up: Editor's Pick