In Honor of Back to the Future Day, Australia's Hoverboard Unit Investigates Curious Crash

Police in Queensland, Australia issued an urgent police report Wednesday morning regarding a 17-year-old man crashing a silver sedan doing 88 m.p.h into a power pole near the cinema.

“Investigations into the vehicle and what a flux capacitor is, are ongoing,” read the blotter from Mount Isa’s Hoverboard Unit. It also noted the driver’s license “expired over 30 years ago.”

This spoof is just one of many paying tribute to the movie Back to the Future Part II on Wednesday. Fans everywhere are celebrating Oct. 21, 2015, or “Back to the Future Day,” which is the date Marty McFly and Doc Brown travel to in the 1989 cinema classic.

Mount Isa’s police report is modeled from a pivotal moment in the movie when the characters accelerated a modified DeLorean to the critical 88 m.p.h. it needed to travel through time.

Everyone in Mount Isa seemed to join in on the stunt. Referring to some of the movie’s plot points, theater owner Jodi Saunders said the driver “wanted to know when we would be playing Jaws 19,” and Mayor Tony McGrady said “repairs underway to save the clock tower.”

The police confirmed their sense of humor with a edited picture of officers rushing to the scene on hoverboards. 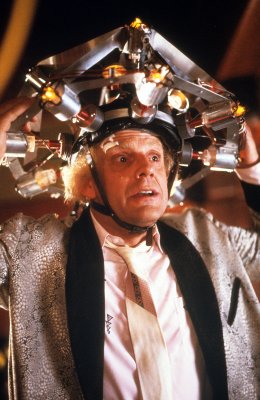 Watch Doc Brown's Message for "Back to the Future" Day
Next Up: Editor's Pick