Saul Mindiola, an Arhuaco Indian who is running for mayor of the Colombian town of Pueblo Bello, gives a campaign speech in Pueblo Bello, on Sept. 20, 2015. Mindiola fears he could lose Sunday's election due to vote fraud, a major problem in hundreds of Colombian towns and cities.
John Otis
By John Otis / Pueblo Bello, Colombia

Colombia’s FARC guerrillas first rose up in the 1960s partly to protest what they viewed as rigged elections. Now, the FARC is planning to disarm and form a political party. But while Colombia’s presidential voting is considered free and fair, local elections remain squalid affairs.

Take Sunday’s mayoral balloting. Watchdog groups say massive vote-buying and voter registration fraud could affect the outcome in hundreds of towns and cities. Many are located in remote areas making them difficult to monitor for wrongdoing while entrenched poverty makes residents more willing to peddle their votes for cash or favors.

“You don’t vote for the best person… You vote for whoever gives you groceries, construction materials or a little bit of money,” says Andres Ceballos, who works for the Bogota-based Electoral Observation Mission. “Unfortunately that’s been the logic here.”

That logic bodes ill for Colombia’s peace process. President Juan Manuel Santos and FARC negotiators last month pledged to sign a treaty within six months to end the longest running guerrilla conflict in the hemisphere. Under the deal, the FARC would disarm within 60 days, form a left-wing political party and take start taking part in elections.

If that happens, the new crop of mayors would be deeply involved in post-conflict programs, such as land reform and efforts to disarm guerrillas and reintegrate them into society. But some candidates in Sunday’s balloting are believed to have links to criminal gangs and large landholders who have little interest in the peace agenda. To run up their vote tallies, electoral officials say that hundreds of candidates have been busing in people from other towns and paying them to illegally register to cast ballots.

“The sad truth is that the big winner in these elections will not be peace and reconciliation but rather gutter politics that reward the most ignoble and despicable acts.” wrote columnist María Jimena Duzán in the Bogotá newsweekly Semana

Such acts are clearly on display in Pueblo Bello in the Sierra Nevada mountains of northern Colombia. Most residents are Arhuaco Indians who – like the FARC – have long distrusted the electoral process. In fact, this is the first year that the Arhuacos are running a candidate for mayor, a former U.N. consultant named Saul Mindiola.

Mindiola wears the Arhuaco’s traditional robes and woven white hat. He often gives speeches in Arhuaco. And he constantly chews coca leaves, which can be turned into cocaine but are viewed by many South American indigenous groups as sacred. At a recent campaign event he rattled off his entire platform and spoke earnestly about women’s rights and the environment.

But some voters had more immediate concerns. One woman approached Mindiola and told him that she and her friends would vote for him if he provided them with roofing materials for their homes that were recently damaged in a storm. He turned them down. Mindiola fears he will lose because he claims other candidates have no such scruples and are busing in out-of-town voters.

“It’s not the residents of Pueblo Bello who will elect the mayor, but the people who are brought in from the outside,” he says.

One person responsible for the alleged fraud is David Hernández, a local bricklayer. He told TIME that he was hired by the campaign of Francisco Villazon, Mindiola’s main rival for mayor, to scour nearby towns and find people willing to vote for him. He said that each recruit received about $30 for taking a bus to Pueblo Bello and registering to vote and would get another $30 plus lunch on Election Day after voting for Villazon.

Hernández acknowledges that such schemes have produced a string of corrupt mayors in Pueblo Bello and other Colombian towns. But he says he needed the $200 that he was paid for rounding up voters because he’s jobless and has 11 children. A spokesman for Villazon denied that his campaign was engaged in electoral fraud.

Ceballos, the electoral monitor, points to similar acts of fraud in more than 400 towns and cities. The situation is so bad that Colombia’s National Electoral Council last week took the unprecedented step of removing 1.6 million people from voter registration rolls. In addition, the Peace and Reconciliation Foundation, a Bogota think tank, has identified more than 150 candidates with links to drug traffickers and other criminal organizations. Under these conditions, said a recent FARC communiqué, it will be hard to “generate the confidence that will allow the guerrillas to become an alternative political movement.”

Critics point out that the guerrillas, who have long funded their war through drug-trafficking, extortion and kidnapping people for ransom, have themselves committed myriad electoral crimes. They have assassinated candidates, launched Election Day attacks, and pressured mayors in FARC-controlled zones to follow their orders and turn a blind eye to their illegal activities.

But with a peace treaty on the horizon Colombia may be entering a new era. Bogotá analyst León Valencia optimistically calls Sunday’s balloting “the last war-time elections.” One reason why voter fraud is receiving so much attention now is because electoral violence and threats against candidates have sharply diminished. For Colombia, that’s progress. 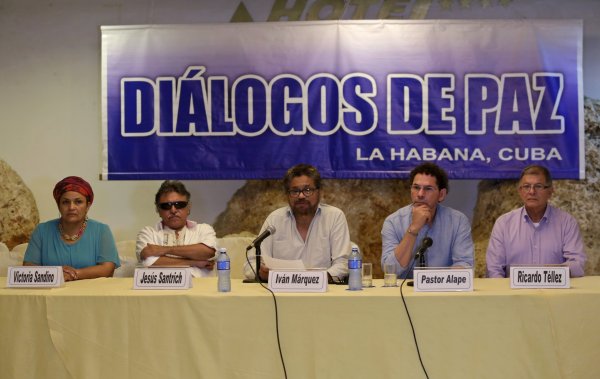