In recent months, a flock of predominately right-wing British politicians have come out in strong favor of Brexit — a portmanteau of British and exit that refers to the U.K.’s hypothetical departure from the European Union. The latest and perhaps most original contribution to their war chest of arguments comes from one Conservative Party lawmaker named Paul Scully, who said in a debate over immigration on Tuesday that leaving the E.U. would markedly improve the quality of the country’s South Asian food.

The British palate has celebrated curries since the early years of the Crown’s rule over India, but Scully says a dearth of experienced cooks has taken a toll on the industry, which he represents in a parliamentary interest group. His logic: there are fewer cooks because there are fewer Asian immigrants; there are fewer Asian immigrants because Prime Minister David Cameron has established firm quotas on immigration that are currently monopolized by immigrants from continental Europe. Under the E.U.’s foundational principle of free movement, citizens of E.U. countries face no immigration barriers when traveling to other member states.

“A lot of people enjoy their curry. I had tandoori chicken, which was served up by the café in Parliament, a little earlier on. It is our national dish,” he said. “Leaving the E.U. would give us more flexibility to control our borders and tackle some of the unintended consequences of immigration from outside the E.U. Things such as the curry industry — bringing curry chefs over — might benefit.”

Fellow parliamentarian and party colleague Anne Main defended his claim and stressed the economic value of the U.K.’s curry industry, which she said is worth the equivalent of $6.18 billion and employs 100,000 people.

“It seems rather perverse that a poor Polish immigrant can walk into this country and take up any vacancy they find in any industry, including the hospitality industry or a curry restaurant, even though they might not have the relevant skills, while a poor, skilled Bangladeshi chef is not able to do that because the bar is set so high,” she said. 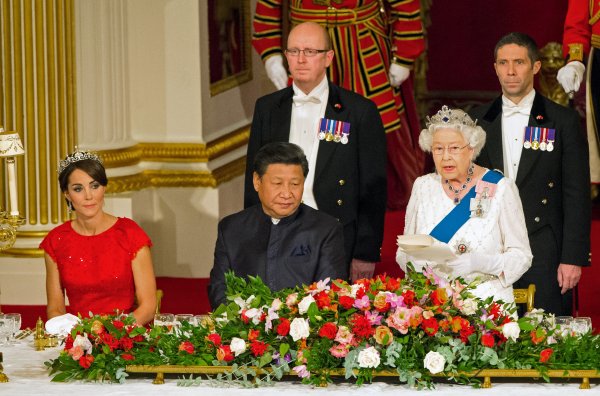 Chinese President Xi Jinping Relishes in Pomp and Pageantry During U.K. Visit
Next Up: Editor's Pick