The fight for quality store workers could become extremely costly for retailers.

Walmart will spend about $1.5 billion next year to raise its minimum wage to $10 an hour, its second hike in two years. That, in turn, will pressure competing retailers to do the same, at a time when associates are being asked to do more and more to keep stores clean and improve customer service.

Hay Group, a compensation research firm, analyzed data from 120 retailers, with the smallest employing 2,000 workers, and determined that those top stores would collectively have to shell out $4 billion more than what they paid last year to match Walmart’s $10 an hour pay.

Adding to retailers’ anxiety, staff turnover is edging up from recession lows, as workers grow more confident that they can find a better, or better paying job, if they aren’t happy. Annual turnover at retailers is currently at about 65% for store workers, according to the Hay Group, up from 50% during the recession. (Pre-recession, it was 90%.)

“That tells you it’s getting harder to hire people,” Craig Rowley, vice president of the retail sector at Hay, told Fortune. “The pool of talent is shrinking and that is putting pressure on wages.”

Hay looked at retailers, ranging from department stores and drugstores, to specialty apparel stores and warehouse clubs, analyzing average pay and hours, to come up with the $4 billion figure. The 100 chains also include big names like Target, Macy’s, Safeway and Rite Aid .

Walmart store workers are being asked to do a lot more than they used to. For one, they have to be able to use in-store merchandise to fill online orders. And they need to make sure stores are cleaner and that shelves are stocked, as Walmart looks to improve customer service at a time when Amazon.com is stealing customers.

Last week, Wal-Mart Stores’ shares took a 10% beating when the company told Wall Street that profit per share could fall as much as 12% next year due to increased costs, including the wage hike.

Earlier this year, Walmart raised its lowest wage to $9 an hour, something many stores already offered. But the bump to $10 for 500,000 or so workers will make the discounter more competitive, and therefore put some heat on rivals.

Other retailers that plan to give workers raises this year included Gap (it preceded Walmart) and TJX. And even more retailers are likely to join that list: Bloomberg reported that the average retail wage in September was $9.56 per hour, according to data on 61 retailers compiled by job search website Glassdoor. Only 19 pay an average of $10 or more, the agency reported. 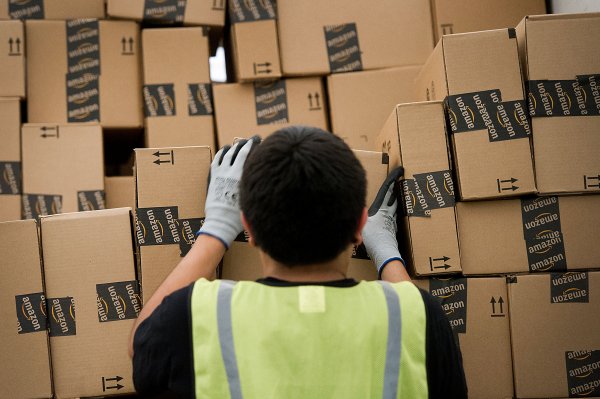 Amazon Is Hiring an Insane Number of Workers for the Holidays
Next Up: Editor's Pick