President Barack Obama walks to Air Force One at Andrews Air Force Base in Md, on Oct. 9, 2015.
Brendan Smialowski—AFP/Getty Images
By Maya Rhodan

President Obama will travel to Charleston, West Virginia, on Wednesday to lead a community discussion on prescription drug abuse and the heroin epidemic. And in many ways, the mountain state provides a tragically ideal backdrop for a conversation on the effects of addiction.

West Virginia leads the nation in drug overdose deaths at a rate of 33.5 per 100,000 people—a little over twice the national average. A recently released report by the state’s Health Statistics Center shows about 2,900 West Virginians have overdosed on prescription painkillers in the past five years. The state is currently on track to have a record year in overdose deaths. It also leads the nation in new cases of Hepatitis B and is second in the nation for new cases of Hepatitis C, statistics that the Centers for Disease Control and Prevention have linked to the heroin epidemic.

“We’re leading in a lot of categories that we don’t like to be leading in and it’s really because of our prescription drug abuse and our heroin abuse,” says Lt. A.C. Napier of the Charleston Police Department.

The increase in drug abuse has spurred the city and state to act, but Napier says the results of the changes being implemented are yet to be seen. In mid-September, the City Council voted to remove an ordinance that made it illegal to possess a syringe in the city, a law that made it difficult to implement needle exchange programs that could help prevent the spread of diseases such as Hepatitis B and C.

The Health Department is working to implement a harm reduction program that combines a needle exchange with drug prevention measures. According to Napier, officers in the city now carry Naloxone, which can reverse the impact of an overdose, and federal officers will soon as well. The police department has also been working directly with other stakeholders such as the health department and schools to address the various ways in which opioid abuse hurts individuals.

“As a young officer I would have had the mentality just to ‘get out of my way and I’ll lock ‘em up,’” Napier says. “That’s not the answer. It’s going to take us as a community coming together to get the results we need.”

Through the city’s “Handle with Care” program, for example, police officers work with school administrators to help kids who’ve experienced trauma like watching a family member get carted away by officers during a late-night drug raid. Police officers record the child’s name, age, address, and the school they attend after the interaction.

They then report to the school and ask them to take extra care to provide resources and support to the student, even if that just means letting him or her take a nap in class or letting them stay a bit longer after school for homework help. In the past year alone, they’ve documented 984 children who’ve been exposed to such trauma during over 500 events, Napier says.

Dr. Michael Brumage, the executive director of the Kanawha County-Charleston Health Department, says he never could have imagined that the law enforcement community would be his biggest ally in the fight against the epidemic, but there’s a feeling throughout the community that they’re all in this together.

“There’s this strong sense of community here and a sense of belonging,” says Brumage, a native West Virginian who’s just 79 days into his job. “There’s a lot of innovative thinking going on.”

Yet, despite the steps being taken to address the issue, there are many who are left to cope with the stress of addiction and the pain it’s causing families.

Michael Farmer, the after-school program director at the East End Family Resource Center, where Obama will be hosting the forum on Wednesday, says the vast majority of kids he and his wife interact with in their work have been affected by drugs.

“I would say at least 75% of the kids we interact with on a daily basis have some kind contact with somebody who has some kind of drug abuse in the area,” Farmer, 28, says. “It’s not uncommon. I’ve gone to at least two funerals of friends who have overdosed.”

Some 33% of the youth who regularly attend programs at the Center do not have permanent housing and 13% of those kids have been directly impacted by drug abuse, according to Executive Director Terri Berkley. The center, which seeks to build “bridges to new opportunity” for its patrons, just recently wrapped up an after-school program that helps teach students about the negative impact of drugs while also introducing them to alternative paths. “We want to encourage our kids to do things other than drugs,” Farmer says.

On Wednesday, Obama will bring together individuals and families who have been directly affected by the heroin epidemic and professionals—in law enforcement, health care, and non-profits—who are on the front lines.

The president is also set to announce federal, state and private sector commitments to addressing the issue. Among those is a Presidential Memorandum that requires improved training of federal medical workers who prescribe painkillers and providing better access to drug abuse treatment. Obama will also announce that a number of media organizations are donating millions in ad time to run anti-drug public service announcements.

Though the spotlight will be on West Virginia, folks on the ground there are hoping the event will help drive home the point that this is not just an Appalachian issue.

“This is not just a Charleston problem, it’s a national problem,” says Matt Sutton, who serves on the East End Center’s board. “From the president’s perspective if he can get a sense of what’s going on here. And hopefully we can really get a good sense of how to move forward.”

The visit also comes at the start of the President’s recently announced tour of American communities to address the state of the U.S. criminal justice system. On Thursday, Obama will sit down with the Marshall Project to discuss reform efforts the same day the Senate is poised to mark up legislation that wil roll back some mandatory minimum sentences. 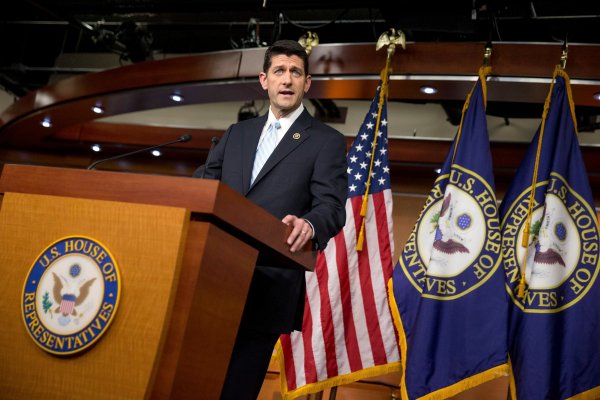 Paul Ryan Outfoxes the House Conservatives
Next Up: Editor's Pick