This Is Why Border Fences Don't Work

Hungarian soldiers close a border with Croatia near the village of Botovo, Croatia, on Oct. 17, 2015.
Antonio Bronic—Reuters
By Tara John

The Great Wall of China did little to halt Genghis Khan and his Mongolian army from conquering 13th century China. Constantinople’s ring of fortifications could not stop the Ottomans from taking over what is modern-day Istanbul. Persian soldiers breached the fortified walls of Babylon in 539 B.C. Yet the building of border structures persists. Around 40 nations in the world have built barriers on their borders with 65 other countries since the fall of the Berlin Wall.

The threats prompting these constructions have changed over time. Justifications for border barriers range from territorial defense—such as the Korean demilitarized zone and India’s Line of Control with Pakistan—to the threat of terrorism, which compelled Turkey this August to reinforce pre-existing wire-fencing while adding concrete walls to parts of its border with Syria. Increasingly, however, walls are being built to control the movement of people—not armies. The threat politicians see today is not the conquering hordes of the past, but unarmed migrants simply seeking safety.

Border walls have shown some temporary successes. According to the Department of Homeland Security, there has been a plunge in the number of apprehensions of illegal migrants on the U.S. southern border—where over 700 of the border’s 2,000 miles are now fenced off— from over 1.6 million in 2000 to around 400,000 in 2014. “There is no doubt that building the fence, putting in drones and of the smart border technology, like cameras and sensors, has made it much harder to cross the border,” says Reece Jones, the author of Border Walls: Security And The War On Terror In The United States, India, And Israel.

Yet the fall in border apprehensions may be less a sign of the wall’s success than an indication that resources are being focused in the wrong area. “Some scholars would suggest that the decline we are seeing with people emigrating across the border was more related with the changing economic conditions that were pushing and pulling people to migrate rather than the increased enforcement at the border” says Jones. Less people are trying to emigrate to the US, while those that do often bypass the southern border altogether. Robert Warren, a former demographer with the U.S. Immigration and Naturalization Service, has estimated that since 2008 there have been more people simply overstaying their visas in the U.S. than illegal border crossers.

Like the French Maginot Line—a defensive system built in the 1930s that the Nazis merely avoided while invading France in World War II—a border wall can sometimes be sidestepped with an alternative route, albeit one that is often more dangerous. The securitization of traditional crossing points on the U.S. southern border has shunted migrants into remote and often unforgiving desert terrain, where around 160 have died this year. “While the total number of people being detained via crossing has declined after the construction of the fence the number who have died has increased because people are doing it in the deserts of Arizona, where its very dangerous to try and move through those spaces,” says Jones.

A similar phenomenon is unfolding in Europe. The razor wire fences along Greece and Bulgaria’s land borders with Turkey, built in 2012 and 2015 respectively, have forced migrants to pursue more dangerous and expensive alternative routes. Trips on the Eastern Mediterranean route from Turkey’s Western Coast to Greece now cost over $1,000. With Hungary sealing its southern frontiers as a response to over 200,000 migrants passing through its territory and the installation of temporary border controls in Germany, Austria, the Netherlands and Slovakia, the price of getting into Europe is likely to increase—a fact that most directly benefits criminal human smugglers.

The erection of border walls often stretching for hundreds of miles can also have a substantial environment impact. A study conducted by Peking University found that the Great Wall of China has altered the genetic structure of the same species of plants on both sides of the wall by blocking its natural gene flow, that aids in the evolution of a species. On the U.S.-Mexico border, the 15-foot-high wire-mesh fence has been acting like a dam, blocking the natural flow of flood water, which in turn disrupts plant life at a UNESCO biosphere reserve in southwestern Arizona, known as Organ Pipe Cactus National Monument.

Despite the downsides, the building of barriers remains popular for many countries. After 9/11, Elisabeth Vallet, an expert on border walls from the University of Quebec, noticed a sharp rise in the building of walls around the world. “We assumed September 11 triggered the proliferation of walls in the world, but we backtracked and discovered that the walls were on the minds of states’ already.” What she found was that building of walls was a sort of backlash to globalization. National identity was in crisis in a world that was rapidly eliminating barriers to trade, communication and cultural exchange. “People were feeling like their way of life was impacted by globalization, that the way to define themselves is to define themselves against the other.”

Building a wall is a very physical way for a country to deal with changing demographics. According to Vallet, the voices of Europe’s right-wing populists like Hungary’s President Viktor Orban, who likes to invoke Europe’s historic Christian heritage against the largely Muslim migrants, and the appeal of Donald Trump’s vision of sealing the U.S.–Mexico border, comes down to national identity. To her, the call for more border fences is a sign of the rise of the extreme political right.

At its most basic, a wall, border or even a basic picket fence psychologically makes people feel safer—whether or not it does in fact. “In the past the threat was often an invading army that was coming to take those resources, to sack a village or to climb over medieval city walls to steal whatever is inside of it… today the change is poor people are on the outside trying to come in to access opportunities which are contained in these borders,” says Jones.

Continued war, poverty and climate change will lead more migrants to spend their savings and risk their lives for a better future. The choice governments will have to make is to either build more costly walls—a kilometer of the U.S.-Mexico border barrier costs between $1-6 million to build and, according to an investigation by the Government Accountability Office in 2009, $6.5 billion to operate over 20 years—or seek sustainable solutions with the money they would have otherwise spent on these barren frontiers. 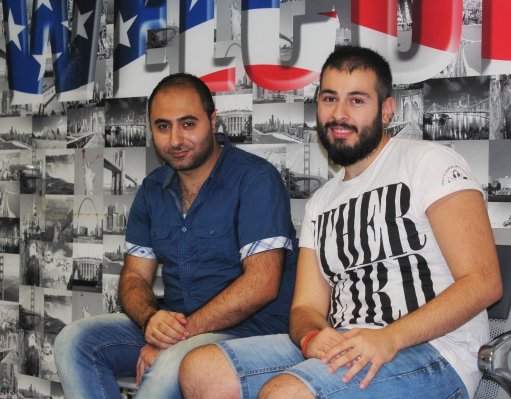 Meet the LGBTI Refugees Who Are Fleeing Syria for the U.S.
Next Up: Editor's Pick