What Canada’s New Liberal Government Means for the U.S.

From legal weed to free trade, Canada’s Liberal government comes to power with a platform likely to usher in changes that could to have significant impacts for the United States.

Liberal Leader Justin Trudeau has promised to run budget deficits to fund a stimulus package aimed at updating Canada’s infrastructure and pumping life into its economy, which is currently in recession. A stimulus package could mean greater economic opportunities for American businesses in Canada, which buys more American exports than any other country.

Canada already has a decades-old free trade agreement with the United States but Trudeau’s Liberals could change the tenor of future trade negotiations. In a statement on the Trans-Pacific Partnership, a controversial trade deal supported by the Obama administration currently being negotiated among Pacific rim nations, Trudeau underlined his support for free trade while slamming the outgoing Conservative Party for not being transparent about negotiations. He promised “to be open and honest about the negotiation process, and immediately share all the details of any agreement.”

Trudeau has promised new investment in clean energy and to take action on climate change, though what, exactly, that might mean is unclear. Under a Liberal government, Canada is likely to be a more agreeable negotiating partner for countries seeking to make significant emissions cuts to fight climate change—Trudeau has committed to taking part in the Paris climate conference set for later this year. But Trudeau also supports the Keystone XL pipeline—a controversial project to connect Canada’s so called “tar sands” to the global energy market—which puts him at odds with the Obama administration.

The son of a former prime minister and at 43 an unusually youthful world leader, Trudeau has promised to legalize recreational marijuana in Canada. The end of marijuana prohibition in Canada would mean an even more odd arrangement along the U.S.-Canadian border in Washington State, where pot is legal and federal officials have declined to enforce the nationwide cannabis ban. Marijuana would then be legal and regulated on either side of the border but still a schedule one narcotic, alongside heroin and LSD, at the U.S. side of the border itself, which is under the jurisdiction of the federal government.

While the United States is in the midst of a presidential election in which immigration has emerged as a highly controversial, emotionally-charged issue, Canada’s Liberals have promised significant increases in the number of immigrants allowed into the country. The country has also pledged to take in 25,000 additional refugees from the Syrian Civil War, which is likely to put pressure on the White House to let in more Syrian refugees. In September, the Obama administration raised the ceiling on Syrian refugees allowed to settle in the U.S. to 10,000 per year, up from just 2,000 the year before.

Trudeau’s platform promises to “repeal problematic elements of Bill C-51.” Sometimes called Canada’s Patriot Act, Bill C-51 is a relatively new piece of legislation in Canada that gives the national security state expansive new powers to fight terrorism. Debate over passage of the bill was fraught with controversy, as critics say the measure tramples civil rights and hinders oversight of intelligence services. Trudeau has been vague on what specific elements of the law he would reverse, but scaling back elements of C-51 could lend momentum to privacy advocates in the United States, where debate over clandestine warfare and government surveillance has been raging since former National Security Agency contractor Edward Snowden’s document leak in 2013. 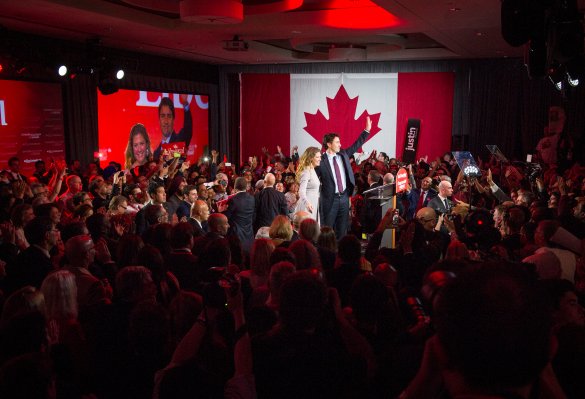 Why Justin Trudeau's Election Matters for Climate Change
Next Up: Editor's Pick