How Fake Presidential Candidates Are Winning

Go to the campaign store of presidential candidate Limberbutt McCubbins and you’ll see a $13.19 coffee mug emblazoned with “Limberbutt 2016,” a $16.99 T-shirt for your dog with the same slogan and a $41.99 hoodie with a photo of the candidate staring resolutely into the distance.

Limberbutt is a house cat, but thanks to his owner Emilee McCubbins and her friend Isaac Weiss, he’s filed forms with the Federal Election Commission to run for president (as a “Demo-cat”) and raked in more than $1,000 from an online campaign store, since suspended to avoid legal trouble.

By contrast, 10 legitimate presidential candidates, including Republicans Carly Fiorina and Chris Christie and Democrat Martin O’Malley, don’t even have their own official campaign merchandise stores.

Over 1,200 people (and animals) have submitted the FEC forms to run for president in 2016, about three times as many as in 2012. There are absurdists, like Butt Stuff, Bippy the Clown and Sir Cookie Zealot, and there are fake celebrities: Queen Elsa, Tyrion Lannister and “Joe Biden,” whose form says he lives on Trap Queen Avenue.

The same appetite for political outsiders that has led to Donald Trump, Ben Carson and Carly Fiorina rising to the top of the Republican primary with zero years of political experience between them has extended to Limberbutt’s cash boon, but also to some of these jokesters beating real candidates in legitimate match-ups.

Much of this can be traced back to Brady Olson, a 15-year-old high schooler in Iowa, better known as Deez Nuts. When Olson filed to run for president as Deez Nuts, he convinced North Carolina’s Public Policy Polling to poll him in a match up with Hillary Clinton and Trump. He came in at 9%, making his candidacy go viral and inspiring a flood of other joke candidates to jump in the race.

“It’s great that they want to get involved, and I support their ambitions,” Olson told TIME in August of the fake candidates following him. “It’s great to know that you’ve made a difference.” Olson also said that he would choose Limberbutt as his running mate.

Then there’s “Honest Gil” Fulbright. Fulbright is actually an actor named Frank Ridley, who is running on behalf of Represent.us, a nonpartisan group pushing for campaign finance reform. Fulbright, who promises to be “a puppet for special interests and lobbyists,” hasn’t filed forms with the FEC and isn’t on the ballot anywhere. But he still beat Jeb Bush and Lindsey Graham in a recent New Hampshire straw poll.

“It’s a pleasant surprise, but not a huge one,” Josh Silver, director of Represent.us said of Fulbright’s success in the poll. “Honest Gil strikes a chord because he exposes our corrupt political system for what it is.”

These three candidates and many of the other pranksters aren’t eligible to be president. Limberbutt is a cat, Deez Nuts is 20 years too young and “Honest Gil” hasn’t even filed paperwork. But the success of fake candidates in some match-ups against real ones is part of the circus of this election season, and shows just how desperate many Americans are to shake up the political process.

Read Next: This Fake Candidate Just Beat Jeb Bush in a Straw Poll 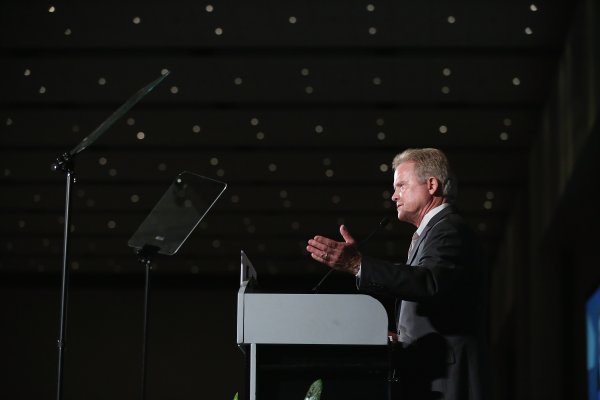 Jim Webb Drops Out of Democratic Primary
Next Up: Editor's Pick