Former Virginia Sen. Jim Webb said Tuesday he has decided to drop out of the Democratic primary and is considering a run as an independent.

Webb, who has long expressed frustration with the two-party system, said at an event at the National Press Club that he is abandoning the race in part because he is disillusioned with the increasing polarization in American politics and is increasingly at odds with the values of the Democratic party.

“Our political candidates are being pulled to the extremes. They are increasingly out of step with the people they are supposed to serve,” said Webb. “I fully accept that my views on many issues are not compatible with the power structure and the nominating base of the Democratic Party.”

His departure from the Democratic primary sounded partly like an introductory campaign speech and partly a grim diagnosis of the American political system. Webb bemoaned the influence of money in elections, paralysis in Washington D.C. and the difficulty of an outsider candidate to win an election.

“Over the years, whether I’ve worked with Democrats or Republicans, my basic beliefs—principles of leadership and love of country—have never changed,” said Webb. “But we must be honest here, because the very nature of our democracy is under siege, due to the power structure and the money that finances both political parties.”

Webb struggled for months to get out of the shadow of former Secretary of State Hillary Clinton and Vermont Sen. Bernie Sanders, who have thus far dominated the race, preventing other candidates from gaining traction. He languished at around 1% in most national polls.

Despite his poor showing in the primary, Webb is considering whether to run as an independent, saying he could win considerably more traction and financial support outside the Democratic Party.

“It’s been very difficult in the Democratic primary process with the dominance of one candidate not only in her candidacy but in the structure of the Democratic Party, the traditional financing structure, the hierarchy themselves, the DNC,” Webb said.

When Webb was asked how he would faire against Hillary Clinton or Donald Trump in a general election, he said, “if we ran an independent race and got traction, I honestly could see us beating both of them.”

If Webb decides to run as an independent, there is a chance he could disrupt the Democratic nominee’s campaign in Virginia, where Webb won a Senate race in 2006 despite being outspent by his opponent. Virginia is likely to swing for the Democrats in next year’s general election, but if Webb splits the Democratic vote in his home state, a Republican could win Virginia’s 13 electoral votes.

But while Clinton and Sanders campaigned on grueling schedules in New Hampshire and Iowa, Webb was often absent, visiting Iowa just a couple of times and only occasionally hitting the campaign trail. He had just a few paid staff, but some disillusioned campaign workers left shortly after joining.

Some former staff members were shocked by the lack of organization in the campaign and said that Webb seriously underestimated the task of running for president.

A decorated Vietnam war veteran and former Secretary of the Navy under President Reagan, Webb cast himself as a foreign policy savant in a race more focused on domestic issues. He has a natural connection with rural white voters, and while he embraced criminal justice reform earlier than other candidates, declined to say “black lives matter” during the Democratic debate when asked.

Webb said during the Democratic debate that he felt stymied by moderator Anderson Cooper and added afterward that the debate was rigged in favor of Clinton and Sanders.

His remarks afterward reflected his position in the Democratic primary: “In that kind of environment it was either going to be Mr. Angry or be a potted plant,” Webb said. 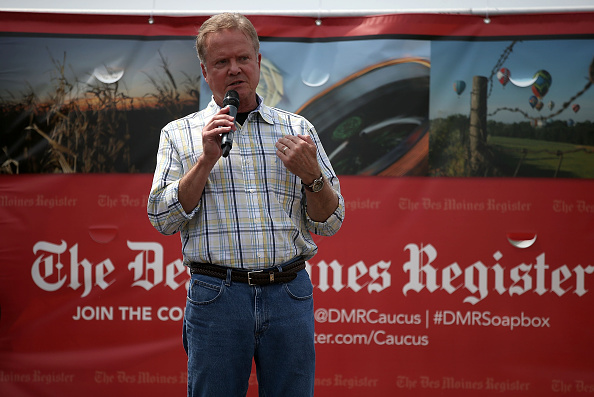 Jim Webb Mulling Independent Run for the White House
Next Up: Editor's Pick