An Australian man was accosted in the Indian city of Bangalore over the weekend after a group of people became incensed that he had a tattoo of an Indian goddess on his shin.

Matthew Gordon, a law student at Australia’s Deakin University, was then taken with his girlfriend to a local police station and only released after penning a letter of apology, the Associated Press reported.

“One of them came to me and confronted me about my tattoo,” the 21-year-old, who was having lunch with his girlfriend and a local friend at a restaurant when the incident took place, told the Hindu newspaper Sunday night. “Soon, they surrounded us and threatened to skin my leg and remove the tattoo.”

According to Gordon, even the policeman whom the gathered mob called to the restaurant while preventing the trio from leaving, berated him for sporting the artwork.

“A policeman arrived and said this is India and one couldn’t sport such a tattoo on the leg,” he recounted.

A video uploaded to YouTube shows angry men haranguing the couple while Gordon and his local friend try to reason with the policeman, and Gordon later denounced their treatment in a Facebook post that deemed his letter of apology “forced.”

“I should not have to apologise for what is on my skin and be put in a traumatising situation where it is apparently acceptable to be harassed, threatened and mobbed,” he wrote.

Sandeep Patil, Bangalore’s deputy commissioner of police, initially called Gordon’s detention a “trivial incident that was resolved after both parties reached a compromise,” but was later quoted on Monday saying he would initiate a formal inquiry.

“If police forced the couple to give an apology, it is a serious matter,” Patil said, according to the Associated Press.

The incident illustrates, yet again, a growing climate of intolerance and lack of free expression under Indian Prime Minister Narendra Modi’s government. Religious hard-liners who insist India is a Hindu nation (rather than officially secular as its constitution states) have become emboldened in the face of lackluster government opposition.

According to the Deccan Chronicle newspaper, several members of the crowd that threatened Gordon and his girlfriend on Monday belong to Modi’s right-wing Bharatiya Janata Party.

“I studied in a school in Kodaikanal [a hill town about 300 miles from Bangalore] and I love India, which is why we came back to visit,” Gordon told the Chronicle, adding that he also has a tattoo of another Hindu deity — elephant-headed Lord Ganesha — on his back.

“We have heard about the growing Hindu nationalism, but nothing justifies the way we were treated,” he said. 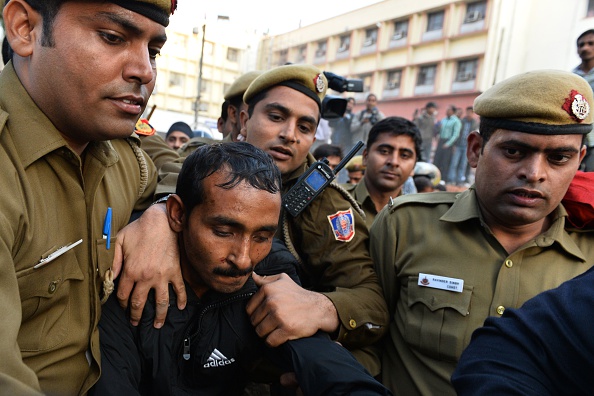 Delhi Uber Driver Guilty of Rape
Next Up: Editor's Pick