People gather for an anti-immigration demonstration organised by rightwing movement Patriotic Europeans Against the Islamisation of the West (PEGIDA) in Dresden, Germany, on Oct. 19, 2015.
Fabrizio Bensch—Reuters
By Nash Jenkins

Thousands of supporters of the German anti-Islam group PEGIDA assembled in Dresden on Monday evening to commemorate the anniversary of their inaugural public demonstration last autumn, the broadcaster Deutsche Welle reports.

German Minister of the Interior Thomas de Maizière condemned the march, which by one estimation drew between 15,000 and 20,000 supporters, as the work of “hard right-wing extremists” and asked Germans to “stay away from those people who are injecting this hatred, this poison into our country.”

PEGIDA has gained momentum since its founding a year ago, capitalizing on the anti-Islamic and xenophobic sentiment that has amplified in Germany following the Charlie Hebdo shooting in January and as thousands of migrants from the Middle East continue to stream into Western Europe, many with Germany as their preferred destination. The nationalist group, whose name is a German acronym of “Patriotic Europeans against the Islamization of the West,” holds Muslims as an existential threat to European stability and Judeo-Christian values.

“We’re just normal people who are scared of what’s coming,” one supporter, a car mechanic in his late 30s, told Reuters. “As a German citizen who pays taxes, you feel like you’re being taken for a ride.”

PEGIDA’s founder and leader is 42-year-old Lutz Bachmann, a former publicist who has been photographed dressed as Adolf Hitler and has allegedly referred to immigrants as “stupid cows” and “trash.” At Monday’s rally, Bachmann said he “had goose bumps” while watching the crowd. Many in attendance declared a hostility toward German Chancellor Angela Merkel, who has recently championed negotiations with Turkey that will taper — but not altogether cease — the stream of immigrants who travel through the country en route to Europe. In January, Merkel publicly decried PEGIDA, saying its leaders had “prejudice, coldness, even hatred in their hearts.”

She is hardly the only German of this opinion. On Monday night, authorities in Dresden reported clashes between the PEGIDA march and an equally large demonstration against it. The anti-PEGIDA rally marched through the city center calling for “heart instead of hate,” and welcomed refugees into the country. 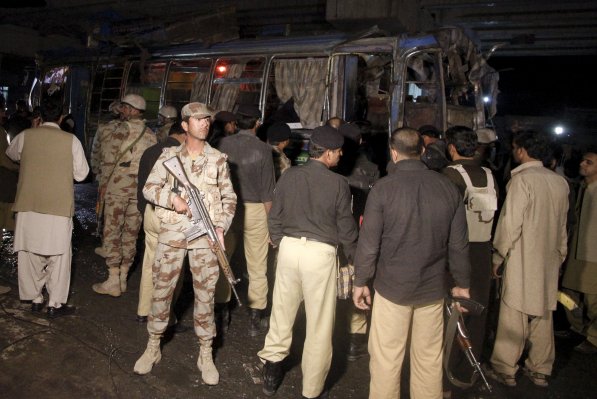 Bus Blast in Pakistan Leaves 11 Dead
Next Up: Editor's Pick