Pakistani paramilitary soldiers march during the 18th passing out parade for the Rangers basic recruits training course at the Sindh Rangers Training Centre in Karachi on Nov. 11, 2014
Rizwan Tabassum—AFP/Getty Images
By Rishi Iyengar

Pakistan plans to appoint a recently retired army general as its new national security adviser, senior officials have told Reuters, indicating yet another step forward in the Pakistani military’s effort to increase its control of the country’s government.

Lieut. General Naseer Khan Janjua will soon be appointed to the key diplomatic and strategic post and will accompany Pakistani Prime Minister Nawaz Sharif on an upcoming visit to the U.S., Reuters cited one military and two civilian officials as saying.

Janjua retired from the armed forces last week and will reportedly replace current national security adviser Sartaj Aziz, who also holds a key post in the Ministry of Foreign Affairs.

“The army chief feels that Sartaj Sahib’s attention is divided,” the military source told Reuters. “So it has been decided that General Janjua will be appointed the national security adviser and Sartaj Aziz can give his full attention to the foreign office.”

In his new role, Janjua will oversee Pakistan’s security affairs, including negotiations with nemesis India.

Aziz is a key confidante of Sharif, who was deposed by a military coup during his previous term as Prime Minister in 1999 before being re-elected in 2013.

Sharif has often been at odds with the military leadership during his current term as well, adopting a far more reconciliatory attitude toward India than the military would like (although the strategy has thus far failed to improve frosty relations between two countries that have fought three wars since their independence in 1947).

Scheduled bilateral talks between Aziz and his Indian counterpart in September were called off at the last minute over a disagreement on the agenda — with Pakistan insisting that the disputed region of Kashmir must be part of the dialogue and India demanding it be restricted to Pakistan’s alleged sponsorship of cross-border terrorism.

Periodic skirmishes between the two armies on the border they share are also a common occurrence despite a 2003 cease-fire agreement, and hard-line nationalist parties in India affiliated with Indian Prime Minister Narendra Modi’s Bharatiya Janata Party have gone as far as preventing Pakistani artists and authors from conducting events in the country.

“The army had advised the PM against engaging Modi, but [Sharif] had insisted that he would pursue peace talks,” the military official told Reuters. “He is very disappointed by Modi’s response, and he has realized that perhaps the advice he got then was correct.”

Janjua’s appointment has been months in the making, a senior minister in the Pakistan government added, saying the country’s army chief has ultimately “convinced” Sharif of the necessity of government-military cooperation on foreign policy.

“This is not about the PM conceding to the army chief or the army being a bully, not at all,” said the military official. “This is about both sides deciding together.” 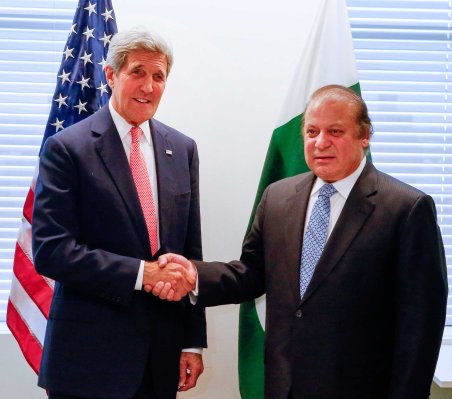 U.S. Looking Into Nuclear Deal With Pakistan, Report Says
Next Up: Editor's Pick