A woman stands at the market in Maiduguri, the capital of Borno state, Nigeria, on June 6, 2013
Quentin Leboucher—AFP/Getty Images
By Rishi Iyengar

A double suicide bombing at a mosque in the Nigerian city that is the birthplace of Islamist terrorist group Boko Haram killed at least a dozen people and possibly more than three times that number on Thursday.

The Nigerian militant outfit is suspected to have carried out the blast in the northeastern city of Maiduguri, although it has not yet publicly claimed responsibility, Agence France-Presse reported.

The attack took place at around 6:30 p.m. local time Thursday, when the bombers entered the mosque disguised as worshippers. The first assailant detonated his device as soon as he was inside the building, while the other followed suit after many had rushed to help victims of the initial explosion.

Although local police placed the death toll at 14, witnesses at the scene say they counted at least 42 bodies inside the mosque, which collapsed and injured several more people engaged in evening prayers.

Boko Haram militants, whose mission is to establish their own Islamic caliphate, have stepped up suicide and guerrilla attacks recently amid a heightened offensive by the Nigerian government under new President Muhammadu Buhari. A triple bombing in Nigeria’s neighboring country Chad killed more than 40 people on the weekend, while another 18 died in suicide attacks outside Nigerian capital Abuja on Oct. 2.

Nigeria and Chad have teamed up with fellow neighbors Niger and Cameroon — also Boko Haram targets — to form a four-nation security operation, to which the U.S. added 300 of its own troops on Wednesday. The Nigerian military claims it has made significant progress in rooting out the insurgents from their strongholds, bringing the African nation one step closer to ending a conflict that has claimed more than 17,000 lives over the past five years. 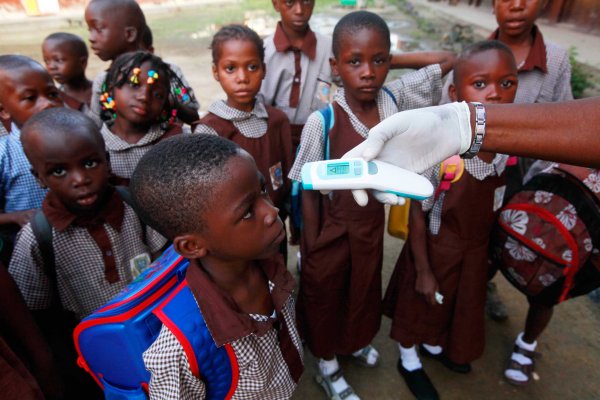 Ebola Could Be Back in Nigeria
Next Up: Editor's Pick