These 5 Facts Explain the Worrying Rise of Europe's Far-Right

Another round of elections, another push from increasingly vocal nationalists. Austria’s far-right Freedom Party gave the Social Democrats a run for their money in local elections over the past weekend, but fell short of capturing Vienna’s mayoralty. What started as an oddity in European politics has quickly become a disturbing pattern. These five facts explain the rise of the radical right in Europe, its causes and its implications for the region.

1. The Wide-Ranging Spread of the Far Right

In the first six months of 2015, Sweden took in 75,000 refugees. For years, this country had one of the West’s most generous asylum policies, accepting twice as many refugees per capita than its European peers. No country seemed to better represent the ideals of openness and tolerance toward outsiders. But recent opinion polls show the Swedish Democrats, a group with neo-Nazi ties, atop the board with more than 25 percent of the vote. Five years ago, they won just 5.7 percent of the vote in parliamentary elections.

Sweden illustrates how wide-ranging the rise of the far right has become, while France shows how deep. Along with Germany, France is a leader of the E.U. But the Front National’s Marine Le Pen—the self-dubbed “Madame Frexit”—currently leads the early presidential field at 31 percent, jeopardizing the entire E.U. project from the top-down. The Front National has been around since 1972, but it has never played a more important role in French politics. Le Pen has shown Europe’s radical right that a little rebranding can mask a long history of xenophobic ugliness.

In part, the rise of the far right coincides with fears aroused across Europe by a tidal wave of desperate migrants. At least 550,000 refugees have arrived in Italy and Greece in 2015 alone. By some estimates, Germany could receive 1.5 million migrants this year. In 2013, Germany spent roughly $14,340 to house and feed each refugee in its care. Multiplied by 1.5 million people, that’s a bill of roughly $21.5 billion at a time of economic stagnation in much of Europe.

Despite all their bluster, the migration crisis is a godsend for Europe’s far right: it gives both new and older parties an opening to capitalize on the rising fear of voters that might never otherwise consider supporting them. As ultra-nationalists who want to protect the strong welfare systems their citizens currently enjoy, they frequently couch their criticism of migrants in terms of economic pragmatism, explaining there is simply not enough money and jobs to go around. Though these parties often have extensive histories of racist comments and policy proposals, their economic message now resonates across a continent exhausted by multiple crises in recent years.

Economic sanctions against Russia, imposed by the U.S. and E.U. after Moscow’s Crimea grab, have made matters worse, because they cost Europe much more than American sanctions cost the U.S.—Russia is America’s 23rd largest trade partner, but Europe’s third. The effects are felt most sharply in key economic sectors: France’s defense industry, the German and Italian energy sectors and British finance. But Die Welt reports that sanctions on Russia could eventually cost Europe $114 billion and up to 2 million jobs.

Meet the German Families That Opened Their Homes to Refugees

See the Objects Refugees Carry on Their Journey to Europe

According to E.U. law, the imposition of sanctions must be unanimous across all 28 member states; that’s a big problem. Vladimir Putin has two missions in Syria. The first is to prop up his ally Bashar Assad and protect Russia’s foothold in the Middle East. The second is to persuade Europeans that Russia can help stabilize Syria, halting the flow of refugees into Europe. There are already plenty of European governments and countries that want to see the sanctions lapse. And all Putin needs is one far-right party to assume power and decide that their country’s economic well-being is more important than punishing Russia. That would further undermine European unity and create a new source of tension in U.S.-European relations at a time when a new trans-Atlantic trade deal might revive Europe’s longer-term economic potential.

Sometimes the fear alone of far-right parties is enough to cause serious headaches. To stave off the rise of the euro-skeptic, right-wing United Kingdom Independence Party (UKIP) and ensure a Tory victory in last May’s elections, David Cameron ran to the right and promised Britons a referendum on whether the UK should remain within the European Union. UKIP won just a single seat in parliament, but its influence set the Brexit vote in motion. In June, 61 percent of Britons said they wanted to remain part of the EU compared to just 27 percent who wanted to leave. But after another exhausting showdown over Greek debt and the onset of the refugee crisis, recent polls suggest that only 45 percent of Britons want to remain and 38 percent would opt to leave. How far will this trend continue? The date of the vote has not yet been set.

The UK isn’t a member of the Eurozone, the currency bloc of 18 European countries. But it’s the second-largest economy in Europe, and its departure would knock off 15 percent of the E.U.’s GDP. Brexit would also cost the British economy roughly $86.65 billion a year. That a country that has thrived under the current E.U. system, particularly one as important as Britain, would vote to leave would do unprecedented damage to the E.U.’s image and confidence in its future.

Cameron wants Britain to remain within the E.U., and he has promised British voters that he will negotiate new terms that help Britain preserve as much as possible of its independence of policy and action. But E.U. leaders know that would set a dangerous precedent. If he’s successful, other countries will want similar deals. Ultra-nationalists in many countries will demand it, and mainstream parties will have to respond to protect their popularity. For Brussels, Brexit has become a “damned-if-you-do, damned-if-you-don’t” problem before the vote has even been scheduled.

Finally, no discussion of Europe’s woes is complete without Greece and its never-ending debt problems. Three bailouts later, its debt-to-GDP ratio remains at 177 percent (up from 126.9 percent in 2010) and the unemployment rate stands at 26 percent. That’s despite the most recent bailout worth $98 billion. For far-right parties across the continent, mismanagement of the Greek crisis is proof positive that the E.U. is a net negative for any country not named Germany. And as extremist parties continue to rise across the continent, Germany’s ability to negotiate a compromise with Athens will be further constrained by voices demanding that the E.U. cut its losses and jettison Greece.

Europe’s biggest long-term problem isn’t any one of these crises—or the reality that they both feed and are exacerbated by the rise of the far right. It’s that these various crises combine to distract Europe’s leaders and institutions from the unfinished business of mending the Eurozone’s original design flaws. Until Europeans finally decide whether they want ever-closer union or ever more independence, none of these problems can really be fully addressed. 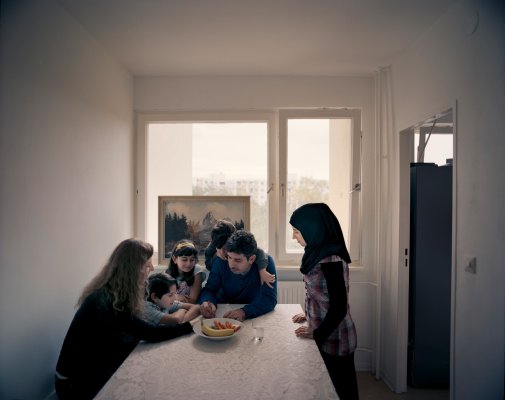