Tennessee Official Explains Why He Wants to Bring Back Confederate Flag

The Confederate flag is in retreat across the country, but not in Greene County, Tenn., where one local official wants to reverse the trend.

The Greene County Commission will vote Oct. 19 on a resolution that would fly the Confederate flag alongside the American flag at the local courthouse. The proposal was introduced by 67-year-old Commissioner James Randolph, who doesn’t expect the 21-member commission to pass the resolution but believes it’s important to put it to a vote. He says flying the flag would honor Confederate soldiers who died in the Civil War and that he doesn’t believe it’s a racist symbol.

“If you look at it and think it’s racist or anything like that, that’s your problem,” said Randolph. “There’s people who are offended about anything. It’s part of our history and I don’t think we should do away with it.”

State and local governments have been reconsidering flying the divisive symbol since the racially motivated shooting in June by Dylann Roof, who killed nine African-Americans at Emanuel AME Church in Charleston, S.C. A 2,000-word racist manifesto by Roof later emerged, as well as photos showing him posing with the Confederate flag.

Within weeks, South Carolina voted to remove the flag from statehouse grounds, and retailers like Walmart, Amazon and Target announced they would no longer sell items that included images of the flag. NASCAR, a sport that originated in the South, said it would ban fans from bringing the flag to races.

Randolph, however, said South Carolina never should have taken down the flag and blamed its removal on “wimpy politicians.”

“There are government leaders that give in to people,” he said.

Randolph said the flag didn’t cause Roof to turn violent and that people are too quick to blame Confederate symbols for inspiring hatred.

“This country wants to blame it on everything but the person who did it,” he said, adding that he believes the U.S. should reinstate hanging people in public. 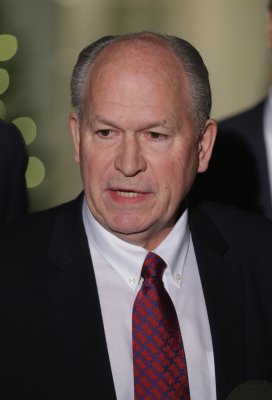