I'm Getting Death Threats for Protesting Guns With Sex Toys

A protestor holds a sign during a demonstration in favor of gun regulation in Houston on May 4, 2013.
Justin Sullivan—Getty Images
Ideas
By Jessica Jin
Jessica Jin is a University of Texas alumna and marketing consultant.

My call for students to attach sex toys to their backpacks went viral. The demonstration is rooted in satire, but it has drummed up animosity that would shatter even the most optimistic viewing of America as a fearless, liberated country.

In response, people have hurled insults about my race, my gender and my sexuality. They’ve threatened my life and safety. Apparently it’s subversive to have a woman advocate for sexual agency and gun control. I did not expect a harmless sex toy to unearth this much bitterness and hostility.

People instinctively felt the connection between the two objects but often told me that they couldn’t quite put their finger on why exactly it made sense to them. Here is the uncomfortable truth that has connected guns and phalluses for centuries: They are frequently used to incite fear and exert power over others.

Guns are used to protect Americans from those who have also armed themselves, and maybe also to shoot the occasional deer or rattlesnake. Guns have been glorified in pop culture as the choice tool for both genius villains and celebrated heroes. Guns have become the poster child of American individualism, the toxic “every man for himself” ideology that has convinced Texas lawmakers that students will not be safe lest they keep a loaded murder weapon between their schoolbooks.

The University of Texas System Chancellor, former U.S. Navy Admiral William McRaven, has said concealed weapons on campus makes campus a less safe environment. McRaven organized and led the raid that killed Osama bin Laden. But since so many seem to think that only we know what’s best for our safety in our limited experience as college students, McRaven who?

To me, the lines of reasoning used to defend gun ownership are also the same reasoning often used to crush sexuality and sexual expression. “You’re going to wish you had a gun when a murderer comes into your home,” is “You’re going to wish you weren’t publicly consuming alcohol in a short skirt when you get date raped,” with just a few words swapped out. These threats will sound familiar to any woman who has ever stepped outside her home. This is why the vitriol directed at our protest has resonated with so many—we’ve heard it all before.

It’s easy to become complacent when something is out of sight, out of mind. I hope that students leave their sex toys on their backpacks for as long as there are other students with guns inside their backpacks. It will serve as a daily visual reminder that people are carrying. 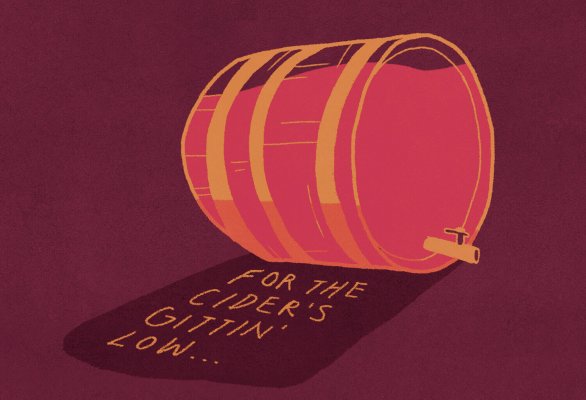 Making Apple Cider Keeps Me Honest
Next Up: Editor's Pick