Review: Rembrandt and Vermeer at the Museum of Fine Arts in Boston

Even when you’re sure an old master painting means something to you, it’s hard to know what it meant to those who first saw it. Over time nuances get lost, references become obscure, fashions stop signifying. What makes the new show at Boston’s Museum of Fine Arts so entertaining, beyond its marquee names, is that it restores some of that social context that time has leached away. “Class Distinctions: Dutch Painting in the Age of Rembrandt and Vermeer,” which runs through Jan. 18 and was organized by Ronni Baer, almost literally fills in the pictures.

By the late 17th century, the Dutch were highly urbanized, living in cities that were cauldrons of change, with the old order undermined by new social mobility. Rich brewers and cloth traders could have themselves painted on horseback, a pose once reserved for kings and aristocrats. Pamphleteers called for laws to forbid mere tradesmen from wearing silk and velvet. Though the housemaids in the work of Vermeer are modestly dressed, his Girl With a Pearl Earring–a picture not in this show–will always look different once you know that Dutch moralists asked how servant girls could be spending more than they made on stylish clothes and jewelry. Where did they get the money if not from a sideline in prostitution?

So this was a society in motion, but one happy to sit for its picture. More than any other European people, the Dutch loved and owned paintings. Everyone but the poor filled their homes with canvases. The dwindling nobility favored portraits, preferably of themselves, as if to confirm their survival. So did the new-money merchants, but to announce their ascendancy. The middling classes went in for still lifes and history paintings. Wealthy collectors also loved landscapes, which Dutch painters had launched into the sublime.

But Dutch painting of the era was irresistible in all departments. Sought-after artists like Gerrit Dou and Nicolaes Maes could produce both impossibly subtle atmospheres and high-def illusions of silk, lace and metal. And far more than peers elsewhere they turned out genre pictures, scenes of notaries at their desks, bakers in their shops, milkmaids with their livestock, paintings in which ordinary people are vividly real. For that matter, so are the cows. Gerard ter Borch did for cows what Titian did for Venus.

Still, Dutch artists were never more at home than at home, producing domestic tableaux. In Interior With Women Beside a Linen Cupboard, Pieter de Hooch offers an almost sanctified take on household order. Beside the tabernacle of her linen cabinet, a woman prepares to put away the pressed laundry that her well-dressed daughter holds like an apprentice–which we now realize she is, in the solemn rituals of Dutch homemaking. 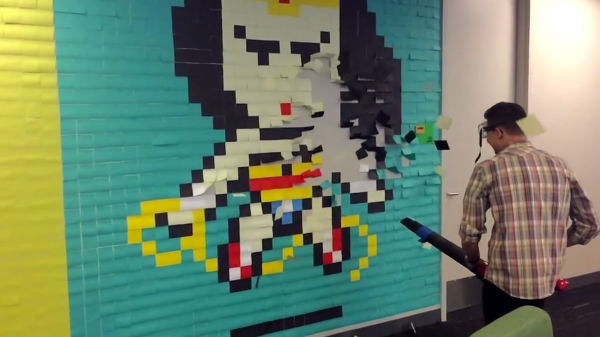 Watch This Weirdly Satisfying Video of Post-It Art Being Destroyed with A Leaf Blower
Next Up: Editor's Pick