Cary Joji Fukunaga was never going to get his movie made. At least, that’s the way it felt when he was bedridden in Ghana with malaria days before he was supposed to begin shooting Beasts of No Nation, a script he first wrote in 2006. Based on a novel of the same name by Uzodinma Iweala, the story follows a child named Agu–played by Ghanian newcomer Abraham Attah–as he is indoctrinated by a warlord (Idris Elba) into a West African rebel army.

Now completed after a nine-year struggle, Beasts of No Nation has received a warm reception at festivals and was scooped up by Netflix as its first original feature film for $12 million this year. (The movie will premiere on the streaming service and in limited theaters Oct. 16.) But its success was far from preordained. Fukunaga scraped together $5 million for production around 2010 and, after directing the first season of HBO’s True Detective, set out for Ghana to begin filming in 2014. He delayed shooting while he recovered from malaria, only for his camera operator to pull a hamstring on the first day of production. Fukunaga, already serving as cinematographer and still aching from his illness, took over a Steadicam for the next five weeks. During that time, several of his actors, mostly inexperienced locals, were jailed in Ivory Coast as suspected mercenaries.

Fukunaga relied heavily on Elba, who broke out in HBO’s The Wire before landing roles in blockbusters like Pacific Rim and Thor, to take the lead on set. “I didn’t think we could get him. Idris is one of those charismatic figures that’s just as popular off-screen as he is onscreen,” says Fukunaga. (Indeed, there’s an effort among Elba’s devoted fans to cast him as the next James Bond.) “I kept saying, ‘It’s going to be hard, not a lot of money, not great conditions.’ But he said he would do it.” The actor stayed in character between takes. Extras would even salute him on his way to the bathroom.

Still Fukunaga barely ate or slept, dropping 20 lb. while the film ballooned $1 million over budget. “It’s not like I was looking forward to a couple months in the bush, living in sweat and mosquitos and the heat. But I do seek out adventure,” says Fukunaga, who once aspired to be a war photographer. “I wouldn’t be interested in doing something easy.”

Born in Oakland, Calif., to a Japanese-American father and Swedish-American mother, Fukunaga, 38, has quickly risen to auteur status. In 2009, he earned the Sundance Film Festival directing award for his first feature film, Sin Nombre, then won an Emmy for his work on True Detective last year. The buzz around him has only been amplified by his laid-back persona and striking features–the rise of the man-bun hairstyle can be traced to his awards-season look.

But despite his growing profile, studios were skittish about the fictional but all-too-realistic gore of this passion project. Unlike the cartoonish violence common in so many Hollywood films, Fukunaga’s bloodshed is wrenching.

“There’s a brutal scene where–in my mind–Agu mercy-kills a woman while something terrible is happening to her. Financiers had questions about that scene,” he says. Studios may have hesitated too, after the first season of True Detective came under fire for its portrayal of women as victims and sex objects. “That didn’t even cross my mind,” he says, shrugging.

Now that the movie is completed, Fukunaga’s struggle is far from over. Several theater chains, like Regal and AMC, are boycotting the film since it will simultaneously be available on Netflix. Still, Fukunaga is emphatic that audiences should try to see it on the big screen. “The impact and power of this film comes from experiencing it all the way through,” he says. “At home, you get a text–you slip out of the experience.”

Then there’s the issue of convincing people to stay seated through the carnage. One of the film’s more gruesome scenes shows Agu killing his first victim by swinging a machete into the top of the man’s skull.

“I know inevitably there will be people who can’t make it through the film,” Fukunaga says. “But I also couldn’t diminish it so much that it didn’t feel authentic.”

He hopes that infusing the first 20 minutes with humor and introducing the audience to Agu’s family will create a bond that carries them through. “I’ll read a terrible headline, and then move on with my life,” he says. “But you can’t erase the emotional memory you have after experiencing this movie. It will always stay inside you.”

Early reviews from the Toronto and Venice film festivals laud Fukunaga’s striking cinematography and suggest Elba could finally get an Oscar nod after being overlooked for his lead role in 2013’s Mandela: Long Walk to Freedom. The plot remains a punch to the gut. But crafting a lighthearted romp isn’t on Fukunaga’s ambitious agenda. “I’d rather be a documenter of our time,” he says, “than pretend none of this is happening.” 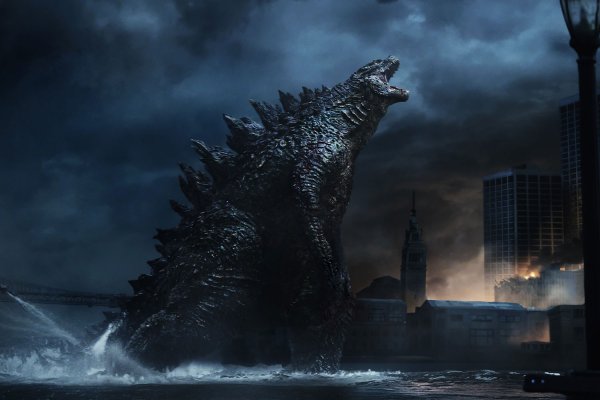 Godzilla Will Fight King Kong in Upcoming Film
Next Up: Editor's Pick