Ted Cruz sometimes campaigns as though he were doing a set at The Improv.

The junior Senator from Texas’ comedic timing is one of his sharper skills. So, too, are his impressions of figures as varied as the late President Reagan, radio host Mark Levin and journalist Sam Donaldson, not to mention The Simpsons characters, Darth Vader and JFK.

His humor might also be his riskiest trait. Like former Republican presidential nominee Bob Dole, Cruz’s jokes could come across as mean-spirited if voters aren’t in on the joke too.

But when Cruz hits it, he connects with the audience in a very real way. He has his act down and he knows it.

“I spent most of last week in Washington, D.C.,” Cruz told his audience packed into a Beef, Bread and Brew restaurant this week in Keokuk, Iowa. “So it is great to be back in America.”

It’s just a step below an “and, boy, are my arms tired” punch line. Yet, like most of Cruz’s jokes, it lands well with his audiences. The laugh lines often appeal to misgivings the party’s base already harbors. No one ever lost a Republican primary making fun of Washington, a Democratic President or the mainstream media. But his laughs also hint a deep frustration inside a party that has given outsider Donald Trump the leading post and two other non-politicians, Ben Carson and Carly Fiorina, close behind.

Cruz’s advisers are betting all three stumble. His campaign is tailoring its message to their supporters, hoping to collect their allies when they collapse. Unlike some other Republicans, Cruz steadfastly refuses to criticize Trump’s incendiary language about immigrants or women.

In the meantime, he’s organizing like gangbusters in the early nominating states. A caucus-goer in Iowa or a voter in New Hampshire cannot escape a Cruz event without turning over contact information to junior aides, and Cruz is the first—and only to do so publicly—to announce a chair of every county in Iowa, New Hampshire, South Carolina and Nevada.

Read More: Cruz Tries to Prove a Conservative Can Win

So while he waits for his early organizing efforts to pay off and rivals to implode, Cruz is having fun.

Obama is often his favored target. For instance, leading into a discussion about U.S. policy toward China, Cruz tweaked Obama for hosting China for a state dinner. The guest list included “the world’s most powerful Communist,” Cruz says, pausing for effect, “and the President of China.” Or when he talks about Pope Francis’ recent visit to the White House, Cruz chuckles. “The press conference at the White House was a little bit awkward. Every time a reporter addressed a question to Your Holiness, Obama answered.”

Cruz doesn’t spare himself, however. When he introduced his wife, a Goldman Sachs executive who took a leave to help the campaign, Cruz ribbed himself. “She has exceptionally poor eyesight,” Cruz joked, making fun of his own looks. Heidi Cruz only shook her head before taking over the event and sending her husband to do a cable news interview.

Journalists, too, get a good skewering from Cruz about how they might react to two terms of a Cruz White House. “By the end of eight years, there are a going to be an awful lot of newspaper reporters and editors and journalists checking themselves into therapy.” At other times, he then launches into an impression of Donaldson, a former ABC correspondent, that brings older audiences to a roar, even as younger audience members exchange puzzled looks.

More seriously, he tells his audiences, they should fear the likes of reporters. “They’re not our friends.” The New York Times is his favorite target.

His jokes often lead to a dark indictment of his foes. For instance, after lambasting Obama as arrogant, Cruz warns that Obama has big plans left for his remaining time in office. “As radical as this President has been in the last six-and-a-half years, in his final sprint, he’s going to be worse.”

And on state-led Common Core education standards, Cruz shifts the blame to “unelected bureaucrats in the bowels of the Department of Education” and Obama. “They’re coercing and bludgeoning the states.” And on regulators, Cruz likens them to pests: “The alphabet soup of federal agencies that descend like locusts on small businesses, killing jobs all across the country.” He then suggests, to laughs, that perhaps voters should turn pesticides on the regulators.

Cruz acknowledges that his rhetoric and style make establishment-minded Republicans nervous. He offers no apology. “I kind of thought that was the whole point of the campaign,” Cruz says.

But Cruz occasionally veers into personally uncomfortable territory, such as when he told one Iowa audience that his grandmother was one of 17 children. “We’re Irish-Catholic. They didn’t know what else to do on a Saturday night.” It got laughs, but there’s a reason why politicians shy away from that kind of joke.

Read Next: Watch Ted Cruz Cook Bacon With a Gun 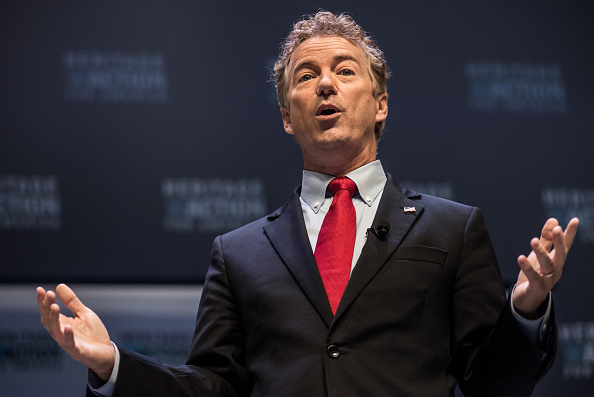 Rand Paul Campaign Promises That He Is 'Here to Stay'
Next Up: Editor's Pick