Rand Paul Goes Back To School Looking for Votes

The scene on the sidewalk at the University of Iowa more closely resembled a fraternity rush event than a political rally.

“Hey, man, come and see Rand at 6:30 tonight,” shouted one supporter of Rand Paul’s White House bid. “Come and get a selfie with the next President of the United States,” another screamed with the zeal of a carnival barker. Told this student had other evening plans, the volunteer urged: “Skip class for Rand. Use the hashtag.”

As students rushed by, a dozen volunteers for the Kentucky Republican’s bid cajoled classmates to head to a large campus lawn in Iowa City for a dusk rally with the libertarian favorite. A political rally, sold like a kegger.

Once there, Paul talked about his efforts to end mandatory minimum sentences for non-violent drug offenders, reduce the costs of college and limit U.S military actions abroad. After his remarks, he delivered on one of his backer’s promise. He patiently posed for pictures with anyone willing to turn over their contact information to his campaign.

“Remember, being in college, people have important discussions that later on in life they wouldn’t have,” Paul tells TIME in an interview. “They have questions about death and war and civil liberties. They’re more into that than people who are out there in their working career worrying about their next paycheck.”

Welcome to Rand Paul’s latest strategy to win Iowa’s Caucuses, slated for Feb. 1. Paul advisers are trying to line up 10,000 college students to turn out for those elections—a steep climb but a huge bloc that could help him win in the lead-off nominating contest. During previous years, college students were still at home with their parents on winter break, leaving out some 130,000 potential caucusgoers who might be inclined to support Paul.

In 2008 and 2012, Rand Paul’s father, Ron, sought the GOP nomination. He had tremendous following on campus, but those students were not back in their dorms when the caucuses were held. “He wasn’t very young or hip, yet he got kids out,” the younger Paul says. “Kids were interested in the message about being less eager for war and protecting their privacy.”

Ron Paul came in third in 2012. Another 4,000 supporters in the caucuses would have delivered him a crown. “Ron was a great influence in getting young people,” said Cliff Maloney, Rand Paul’s youth vote director. “We are absolutely building on what Ron did in 2012.” And this time, the students will be on campus.

It’s an unconventional play, for sure, but one that Paul needs to make. His polling has slipped and his debate performances have not helped him. Instead, he is trying to woo a political demographic that is unheard of among Republicans and unreliable for both parties: young voters.

“We grew up during the Great Recession,” says Reid Ronnander, a 23-year-old graduate student studying statistics at the University of Iowa. “We were told that if you worked hard and did well, things would fall into place. That isn’t happening, and Rand gets that. With him, we can make America great again.”

That enthusiasm for Paul’s message—even when articulated by ripping off Donald Trump’s slogan—is one that can be seen on campuses across Iowa. Paul visited nine of them this week, focusing almost exclusively on his pitch to young people who notoriously do not vote.

“In Washington, boom, boom, boom. The war drums,” Paul told students at Drake University, warning of entanglements in the Middle East. “You’re the ones who will fight the war. So think long and hard if you want to fight another war. Your vote will make a difference.”

He’s making some inroads. “Our generation is going to be how he gets to the White House because it is our future,” said Michael Straub, a 19-year-old University of Iowa freshman who grew up in Des Moines. He was volunteering for the first time this week, waving Rand Paul signs and wearing a campaign T-shirt. “He’s fighting for us.”

His pal, 18-year-old Tom McIlhon, was also volunteering for the campaign, helping to direct foot traffic. “He can talk to young people in a way other candidate haven’t been able to,” the freshman from Des Moines said.

Both are involved in one of the 20 Students for Rand chapters around Iowa. Nationally, there are more than 350 similar chapters. “The message he delivers to a group of tea partiers or college campuses is identical,” Maloney says.

Potential caucusgoers are showing up. “Have your phone out and your camera up, ready to go,” an organizer told enthusiastic students. Before Paul delivered his speech to students, he stood for 23 minutes taking photos with students as hip-hop and rock blared over the sound system.

But that doesn’t mean his crowds are agreeing with him, or that his positions dovetail with theirs. As he wrapped up his tour, he took a question from a voter about whether employers should be allowed to fire gay and lesbian workers on the basis of their sexuality. Paul said it the government should not get involved.

“I think really, the things you do in your house, if you leave them in your house, they wouldn’t have to be part of the workplace,” Paul said, taking a position that’s unlikely to win him support among younger voters who overwhelming support gay rights. Paul added that a non-discrimination law would allow “a whole industry for people who want to sue” employers.

Instead, Paul said those gay or lesbian employees should find other jobs. “I think society is rapidly changing,” he said. “If you are gay, there are plenty of places that will hire you.” 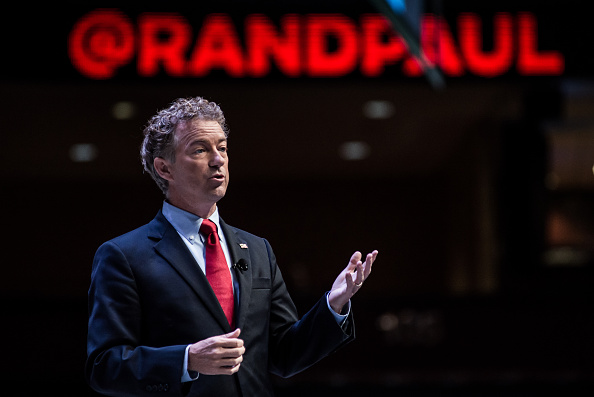