Street artists in Berlin “hacked” the Showtime series Homeland, sneaking Arabic graffiti critical of the show into scenes by daubing them on sets they were hired to help design.

A group identifying itself as The Arabian Street Artists, including Heba Amin and Caram Kapp, slipped anti-Homeland graffiti into the most recent episode of the show, which aired Sunday, October 11.

Slogans in Arabic such as “Homeland is racist,” “There is no Homeland,” and “This show does not represent the views of the artists” were painted onto sets. In a statement posted on Amin’s website, the artists call Homeland “the most bigoted and racist TV series.” The award-winning show has received criticism from some quarters for its depictions of Muslims and the Middle East.

In a statement to TIME, co-creator of the show for the network Showtime Alex Gansa seemed largely unperturbed by the act.

“We wish we’d caught these images before they made it to air,” Gansa told TIME. “However, as Homeland always strives to be subversive in its own right and a stimulus for conversation, we can’t help but admire this act of artistic sabotage.”

The artists say they were hired by the show to add graffiti to lend authenticity to sets in the outskirts of Berlin intended to portray a Syrian refugee camp. “The set decoration had to be completed in two days, for filming on the third,” the artist statement says. “Set designers were too frantic to pay any attention to us; they were busy constructing a hyper-realistic set that addressed everything from the plastic laundry pins to the frayed edges of outdoor plastic curtains. It looked very Middle Eastern and the summer sun and heat helped heighten that illusion. The content of what was written on the walls, however, was of no concern.”

Amin, who identifies herself as “an Egyptian visual artist, researcher and, currently, visiting assistant professor at the American University in Cairo,” has not responded to a request for comment. 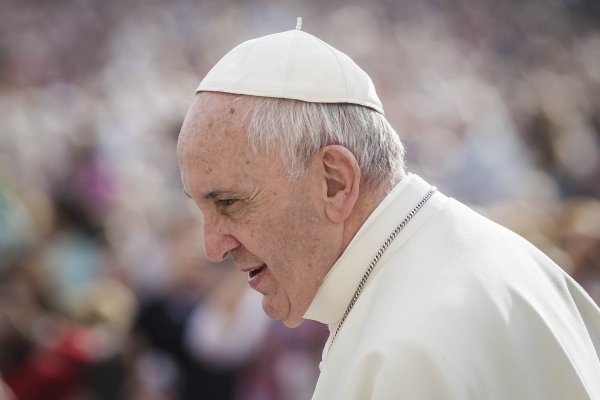 Pope Francis Apologizes for Vatican Scandals
Next Up: Editor's Pick