Peace Looks Further Away Than Ever for Israelis and Palestinians

Palestinian protesters run for cover from tear gas fired by Israeli soldiers during clashes on the Israeli border with Gaza in Buriej, central Gaza Strip on Oct. 15, 2015.
Khalil Hamra—AP
Ideas
By Ilene Prusher
Prusher is a journalist, author and lecturer. She was a foreign correspondent for The Christian Science Monitor from 1996-2010, where she covered the wars in Iraq and Afghanistan and served as the newspaper’s bureau chief in Jerusalem, Istanbul and Tokyo. Most recently she served as Jerusalem correspondent for TIME Magazine, a columnist for Haaretz, and a program host on TLV1 Radio.

The sane among us have always wanted to believe that this conflict wasn’t really about age-old hatreds or religious intolerance. We didn’t buy that the Israeli-Palestinian situation was intractable or hopeless. We thought that this was a real estate war, and if the real estate could be divvied up with some modicum of fairness, the war could be brought to an end. And with increased economic prosperity, Israelis and Palestinians would have more to share, with greater incentives to keep the peace.

The anthropologist Margaret Mead argued that despite man’s aggressive nature, war is a learned behavior and can be unlearned. Perhaps then Israelis and Palestinian could unlearn killing each other?

In fact, the leaders who signed the Oslo Accords 22 years ago would often say that no act of violence could derail this historic course: To stop would be to hand the terrorists a victory. Optimists compared the peace process to a train that had left the station and passed a point of no return.

Those statements now ring hollow. These days the opposite is true: With each act of violence, which now occur at a sickening clip in the form of daily stabbings and shootings, peace looks like an impossibility. Whereas two decades ago, Israeli and Palestinian leaders still spoke of each other as peace partners, today each side puts the blame entirely on the other.

It turns out that solving the conflict was much harder than dividing up the real estate—which is complicated enough in a land claimed as holy by Jews, Muslims and Christians. Today, it’s become more of a religious war—a war of perceptions and misperceptions. At the center of it is what Jews call the Temple Mount and Muslims calls the Noble Sanctuary, encompassing the Dome of the Rock and the al-Aqsa Mosque. Six months ago, when I published a special report on developments surrounding the contested holy site in this magazine, I saw how pivotal it had become, and how perceptions had begun to trump reality. Each side had been influenced by radical thinking that has spread from the margins into the mainstream.

Many Palestinians now believe Israel is working to take over the site, first by changing the status quo by allowing Jewish prayer there, and eventually by driving out Muslims altogether to make way for a new Temple. “Al Aqsa is in danger,” is a slogan that is no longer being promoted solely by a few Islamic extremists, but the Palestinian Authority as well. “We won’t let the Jews defile our holy places with their filthy feet,” PA President Mahmoud Abbas said last month at a news conference aired on Palestinian television, in reference to the entrance of Israelis soldiers at the site during unrest. Speaking at the United Nations General Assembly two weeks ago, Abbas said that Israel was trying to violate the status quo at the site.

The comments played into the hands of Prime Minister Benjamin Netanyahu, who has built his career casting doubt on Abbas and on Yasser Arafat before him. Netanyahu said the Palestinian leader’s speech was “deceitful and encourages incitement and lawlessness in the Middle East.”

It might well be that Abbas’ statements encourage even more people to believe they should act to “defend al-Aqsa,” the language that many Palestinians use in connection to the issue. Or it might be that Abbas is simply reiterating what many Palestinians already believe. To them, part of the proof is the increased numbers of Israeli Jews visiting the Temple Mount during the specified windows of time in which non-Muslims can visit according to the unwritten rules—essentially a set of gentlemen’s agreements set up after Israel wrested control of East Jerusalem in 1967.

Here, too, there is a movement from the fringes to the mainstream. More Israeli Knesset members have been making trips to the Temple Mount, and many more of their religious followers are demanding prayer rights there, convinced that the status quo is unacceptable and ignores the historic Jewish connection to the holy site.

Of course, this new round of conflict is about more than just extreme thinking when it comes to the holy sites. It’s about everything that remains unsolved, everything that gets ignored while leaders avoid returning to the negotiating table. Most Israelis don’t want to acknowledge that the 48-year-old occupation makes for a constant source of suffering and frustration, that all the great potential of the Start-up Nation will never be realized without finding a solution for the disempowered people living next door.

So far at least eight Israelis have been killed in a string of stabbings, shootings and the stoning of a car, while 31 Palestinians also have been killed, either after being identified as attackers of in stone-throwing clashes with Israeli forces. When a wave of terrorism rises, average Israelis are likely to see it solely as a surge of hatred for them as Israelis or as Jews, but not as a consequence of the failure of their leaders to negotiate a two-state solution. In the meantime, the mayhem continues, terrorizing innocent people who must live in the midst of it, and flooding the rest of the world with depressing news and gruesome images.

Few Israelis and Palestinians will be happy with what I write, accusing me of the crime of moral equivalency. Israelis will say: How dare I point to the occupation and political intransigence as the source of this horrific violence? Palestinians will argue: How dare I blame politically stirred fervency for al-Aqsa and the acts of a few young people willing to sacrifice their lives to be martyrs, when all of the real power and force is wielded by Israel? A growing number of people seem only willing to acknowledge the violent behavior of the other side, and not their own.

If war is a learned behavior, then the people fighting this on-again, off-again war should be getting better at it. But today the favored weapon is a throwback to an earlier era: a simple knife. The suicide bombings of the last intifada seem to have given way to low-tech but terrifying stabbings. Some Palestinians say it’s just the easiest and most transportable weapon they have access to; others theorize that ISIS has successfully returned the bygone “glory” of swords and knives to the Middle East. Either way, this is a war that too many people seem determined to keep learning, because the alternatives involve making compromises that they and their leaders are apparently still not prepared to make. 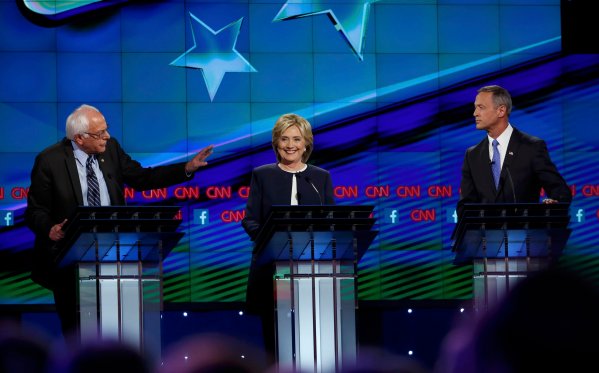 Stop Talking About Gun Control—Enforce It
Next Up: Editor's Pick