Here's the Latest News From Pluto

Pluto, as seen from New Horizons in pictures taken over the last year. The pictures become clearer as New Horizons approached and made its closest pass to the planet on Tuesday, July 14.
Images: NASA/APL/SwRI Animation: Jonathan D. Woods
By Jeffrey Kluger

There’s an awful lot you can learn about planetary science from reading the compelling new paper about the New Horizons mission to Pluto, just released in the journal Science. Actually, there’s a lot you can learn before you even get past the bylines.

Getting your name on a journal paper is not easy, and it’s usually up to the lead author to determine who deserves the shout-out and who doesn’t. In this case, principal investigator Alan Stern did not have to give the matter too much thought: there are an extraordinary 150 co-authors listed after his name—a testament to the collaboration and choreography necessary to mount a mission as improbable as New Horizons.

Ever since then, New Horizons has been streaming back the data it collected during its flyby of the Pluto system. While there is a great deal more still to come, there is now enough for Stern and his many collaborators to have released a preliminary report.

Easily the most visually pleasing feature of the dwarf planet was the huge heart-shaped region in its southern hemisphere, a formation the New Horizons team informally dubbed Tombaugh Regio, after Clyde Tombaugh, the amateur astronomer who discovered Pluto in 1930. But for geologists, Tombaugh Regio has a lot more to it than sentiment.

The western lobe of the heart, dubbed Sputnik Planum, is a relatively smooth plain, though isolated mountains do poke up to heights of 2 to 3 km (1.25 to 1.9 mi.) above the surrounding terrain. In the bitter cold so far from the sun, frozen nitrogen, carbon monoxide and methane make up part of the surface, but even in their solid state, those materials slump over time. For that reason, the investigators believe the mountains are built on a sort of bedrock of simple water ice, which is much stronger in deep-freeze temperatures.

Just how so much of Sputnik Planum has remained so smooth despite bombardment by meteorites is not easy to say. Moons and planets get resurfaced all the time, but it is often the result of tidal squeezing that results from the gravitational influence of nearby worlds, which in turn leads to volcanic activity. Pluto, however, is a world without those solid tides. “As such,” the researchers concede, “the young surface units on Pluto present a puzzle.”

The eastern lobe of the Tombaugh heart is more rugged than the west, with a lower albedo—or reflectivity—as a result. Some of this might result from ice subliming from the surface during Pluto’s seasons—which result from an eccentric orbit carrying it periodically closer to and further from the sun. A not-yet determined mechanism might also transport surface material from Sputnik Planum eastward, perhaps carried by Pluto’s thin winds.

The atmosphere—made up mostly of nitrogen, methane and acetylene—that produces those winds is very real but very tentative. Its pressure at Pluto’s surface is less than 10 microbars, which is not an easy unit of measure to grasp, until you realize that that’s one one-hundred-thousandth of the pressure of Earth’s atmosphere. Still, the haze is sufficiently dense to have produced an iridescent bluish halo extending roughly 93 mi. (150 km) into space when New Horizons captured an image of a backlit Pluto. The reddish color of the surface of Pluto itself is caused by tholins, the molecular residue of organic molecules like methane, ammonia and water, when they are bathed by ultraviolet radiation.

Charon, which is more than 85% of Pluto’s size and is thus seen less as a moon than as a companion dwarf planet, has more surface mottling than Pluto, with a dark polar spot measuring 153 mi. (250 km) across. It’s unclear what caused the formation but the best guess so far is that it’s an impact scar. Much of the rest of the surface is characterized by rolling planes and running fractures—a network of cracks likely caused by impacts as well. Little data about Charon’s atmosphere has been beamed back yet, with the exception that there isn’t much of it—significantly less than Pluto’s.

Nix and Hydra, two smaller, irregularly shaped moons, have so far yielded spottier data and grainier pictures, but their highly reflective surfaces do seem to indicate abundant water ice. For them, too, more information is still to come.

The spacecraft is now well past Pluto, having continued to put more than 36,000 clicks on its odometer every hour since mid-July, and is heading into the Kuiper Belt—the band of comets and Pluto-like objects beyond the orbit of the planets. The spacecraft’s mission was set to end in 2016, but as often happens when a ship has performed so exquisitely, that deadline has now been extended, so that it can continue on to a later rendezvous with another icy body, known simply as Kuiper Belt Object 2014 MU69.

That little world won’t inspire the love that has come Pluto’s way—and it surely won’t be stamped with the serendipitous heart to prove it. Good science isn’t always going to make good poetry—but as with the dispatches from Pluto, it’s awfully nice when it does. 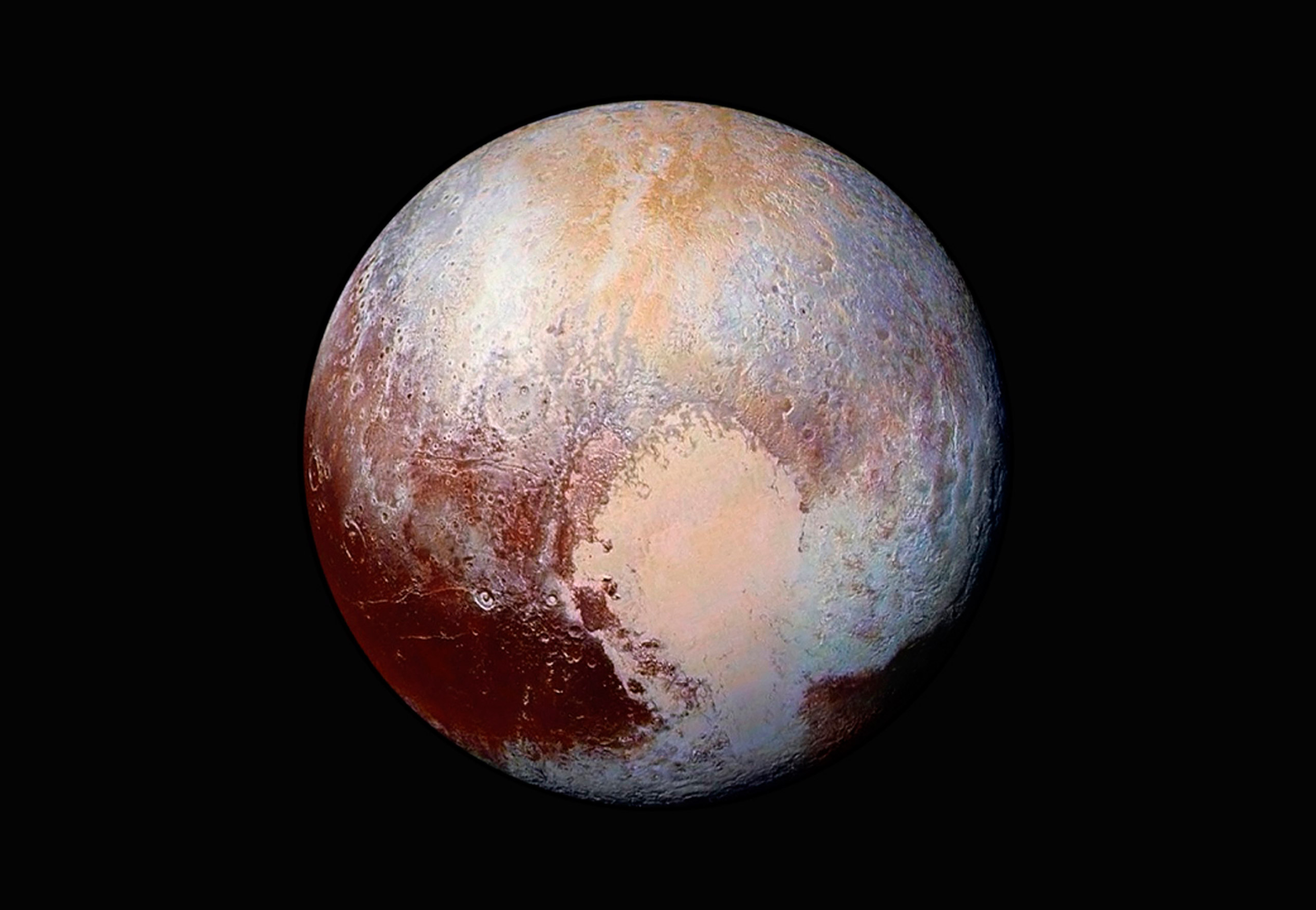 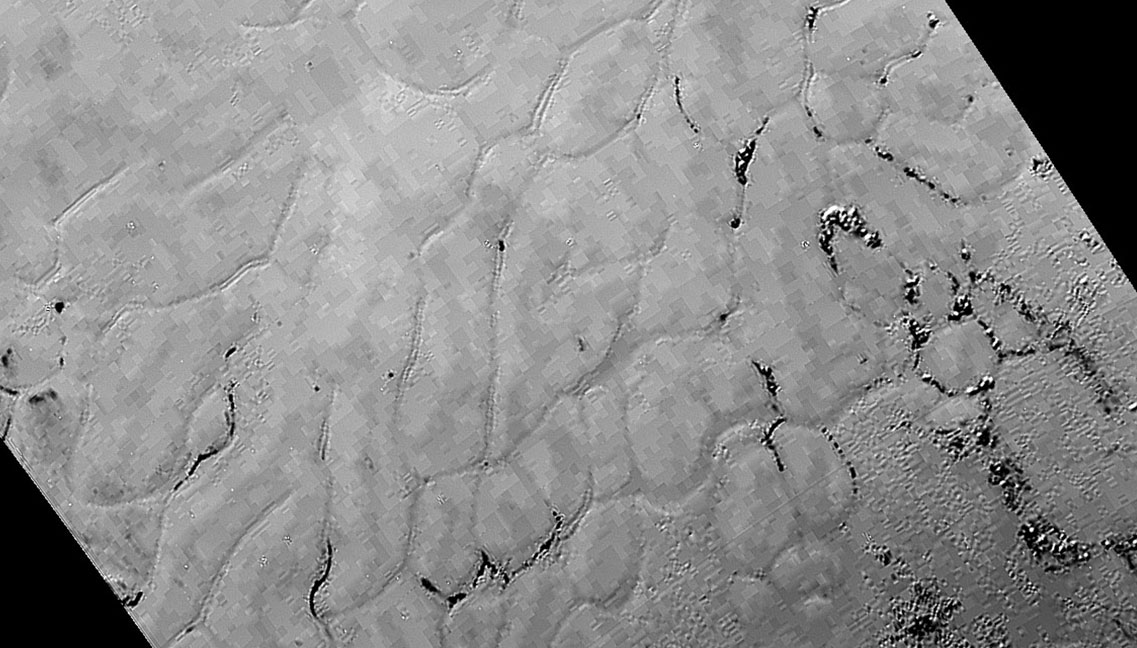 In the center left of Pluto’s vast heart-shaped feature – informally named “Tombaugh Regio” - lies a vast, craterless plain that appears to be no more than 100 million years old, and is possibly still being shaped by geologic processes. This frozen region is north of Pluto’s icy mountains and has been informally named Sputnik Planum (Sputnik Plain), after Earth’s first artificial satellite. The image was acquired on July 14 from a distance of 48,000 miles (77,000 kilometers).
NASA/Johns Hopkins University Applied Physics Laboratory/Southwest Research Institute 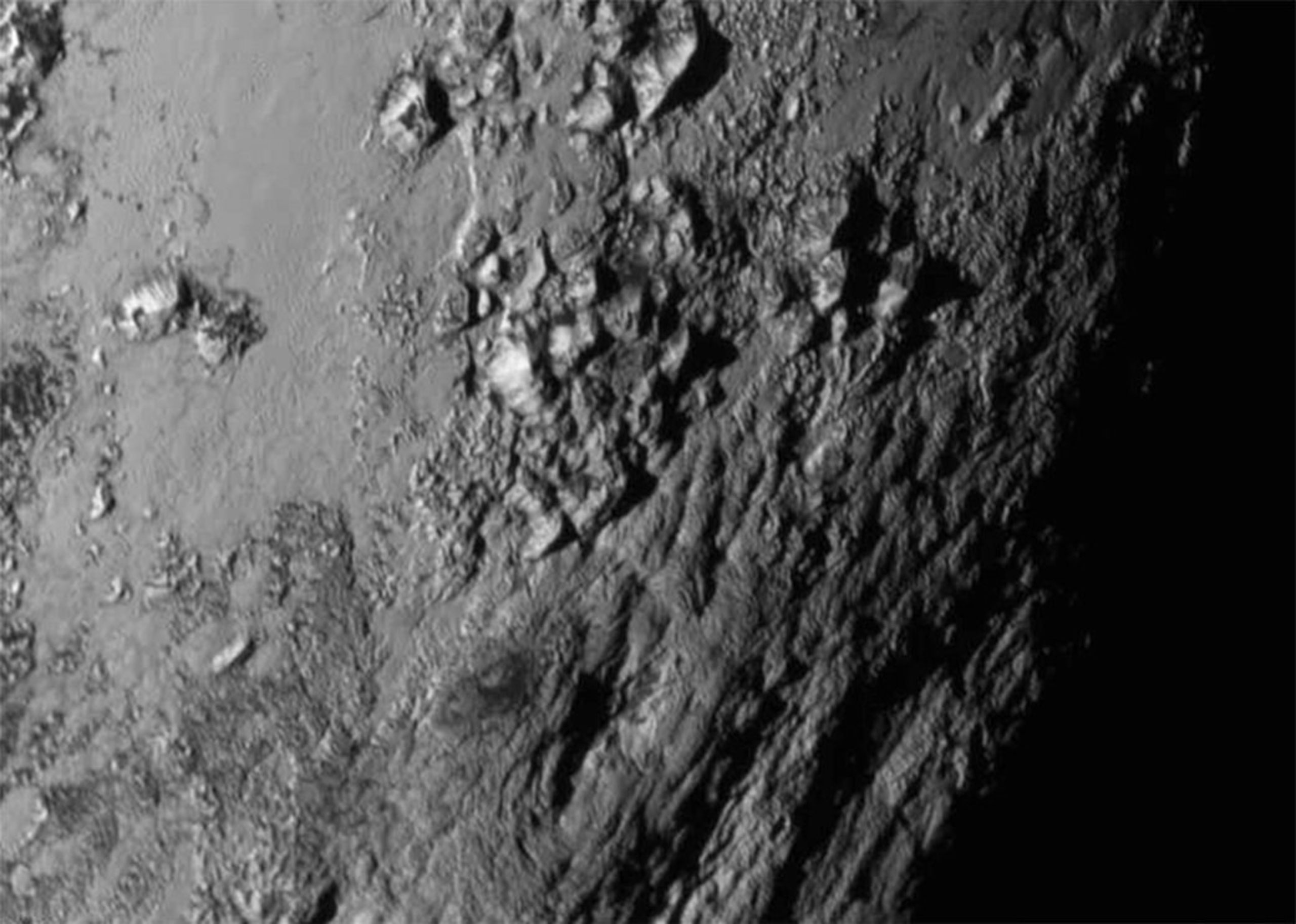 A close-up image of a region near Pluto's equator shows a range of mountains rising as high as 11,000 feet (3,500 meters) taken by NASA's New Horizons spacecraft as it passed within 7,800 feet of the dwarf planet on July 14, 2015.
NASA/Getty Images 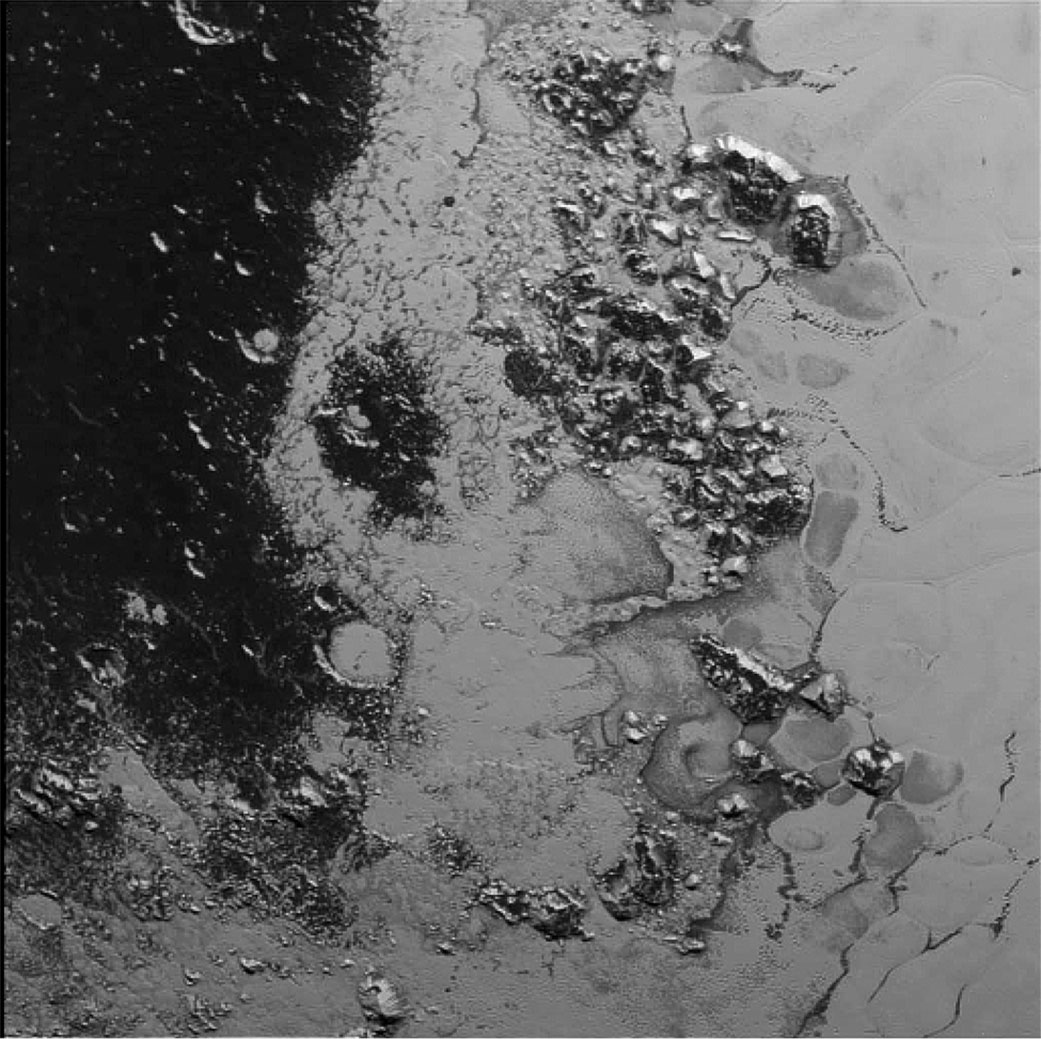 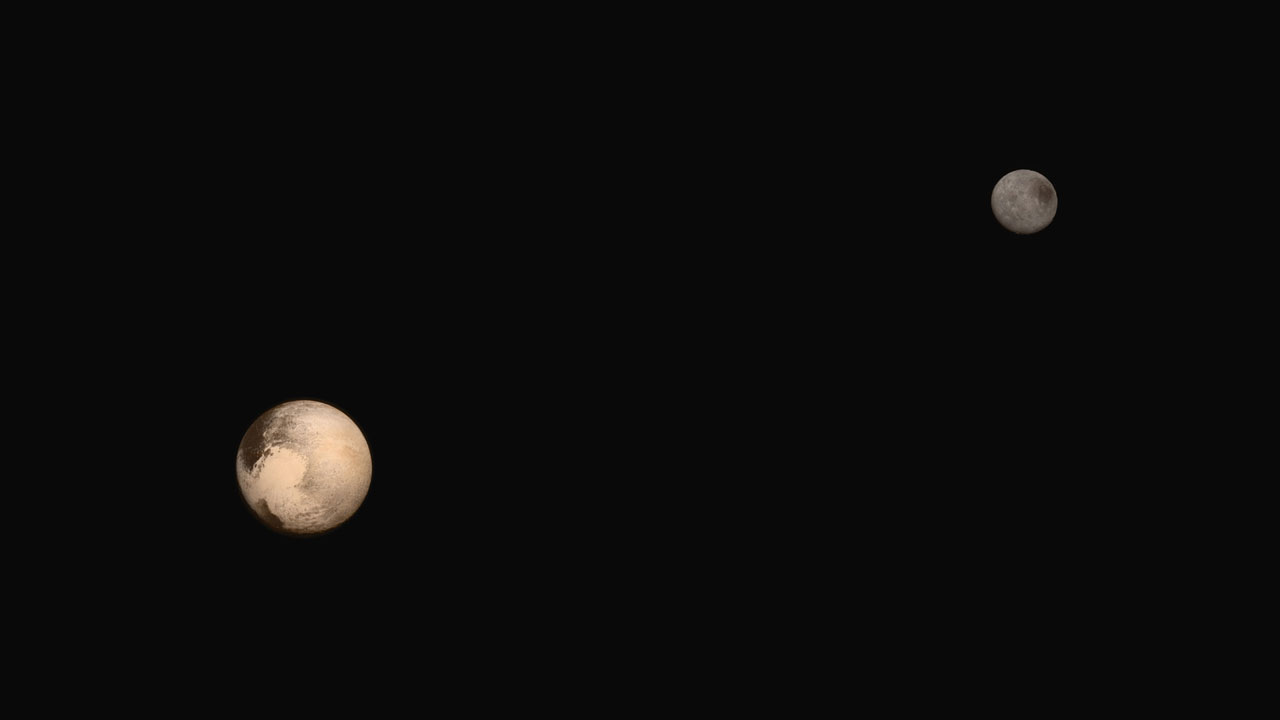 A composite image of Pluto and its largest moon Charon collected separately by New Horizons during approach on July 13 and July 14, 2015. The relative reflectivity, size, separation, and orientations of Pluto and Charon are approximated in this composite image, and they are shown in approximate true color.
NASA/JHUAPL/SWRI 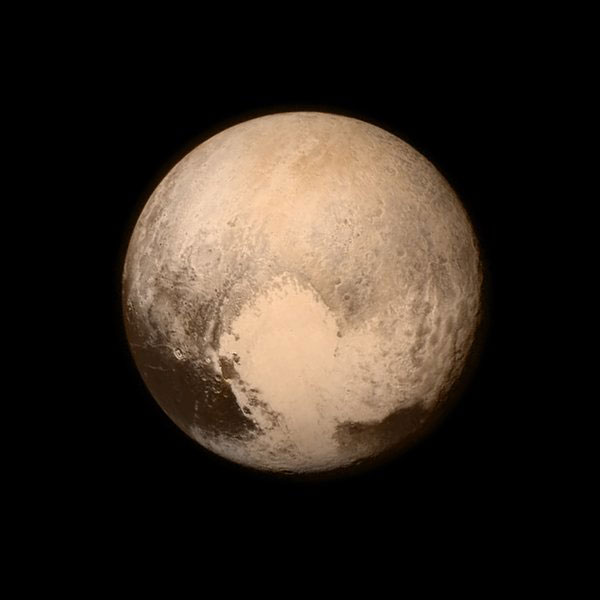 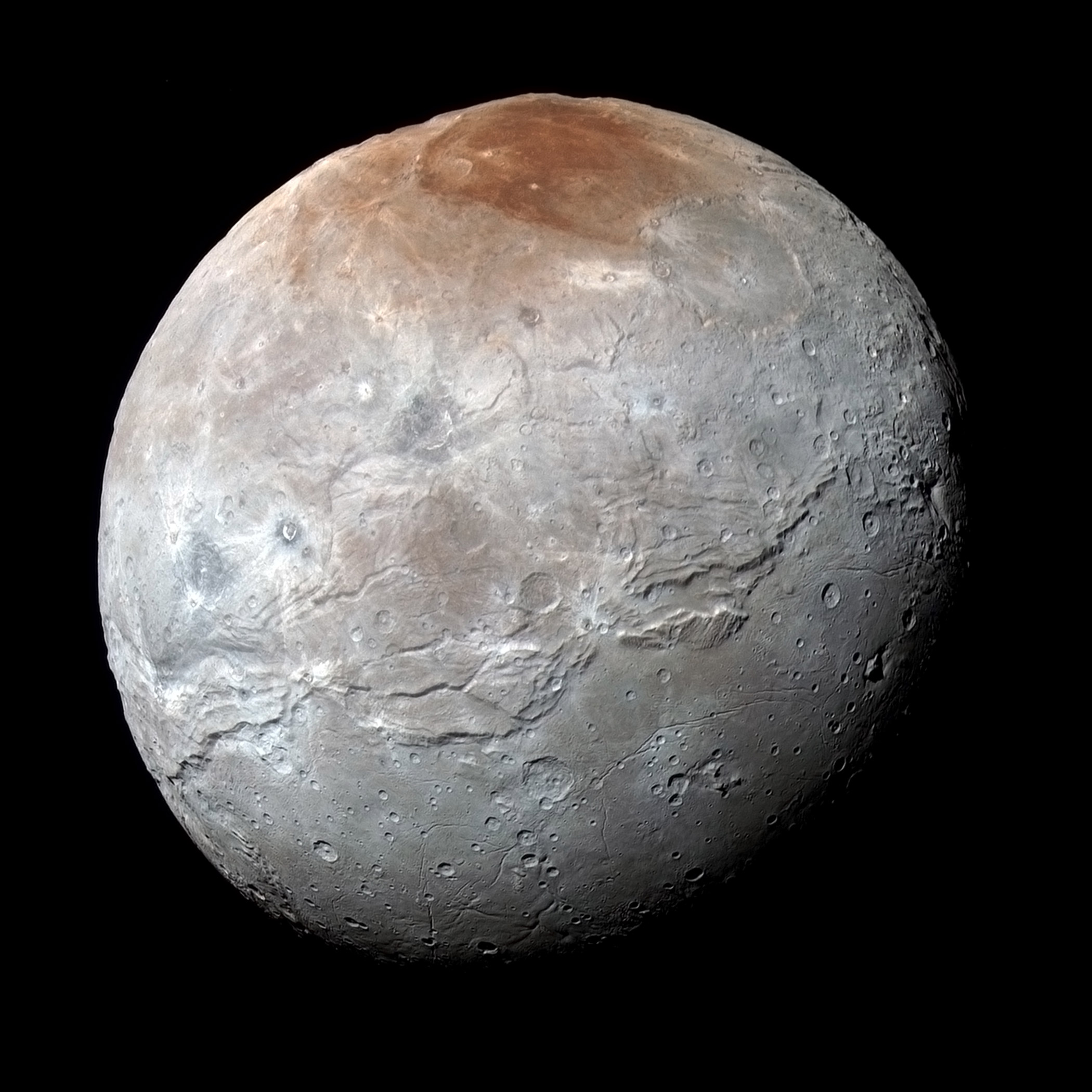 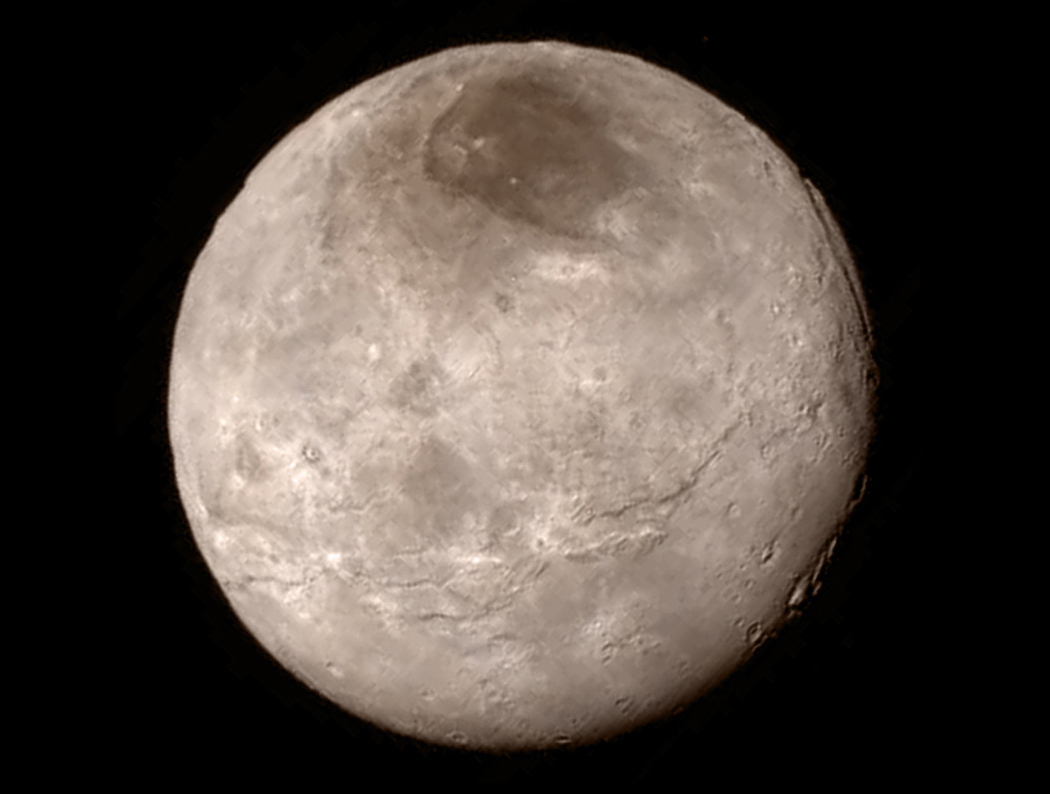 A close up view of Pluto's largest moon, Charon.
NASA/JHUAPL/SWRI

Pluto on July 14, 2015, as seen by NASA’s New Horizons spacecraft while it looked back toward the sun.
NASA/JHUAPL/SwRI
1 of 9
Advertisement