So, about last night… Democrats faced off in their first on-stage contest in Las Vegas. Here’s how the candidates performed:

Hillary Clinton: The former Secretary of State showed up with hopes of putting her turbulent summer in the polls and on the campaign trail behind her, and she did just than with a commanding performance. She emerged on the offensive against her rivals, even as they shied away from criticizing the still-popular front-runner. And on the moments they tried, Clinton was prepared with a quick zinger to beat them back. Clinton also saw Bernie Sanders and Martin O’Malley essentially absolve her from wrong-doing in the ongoing email scandal, providing her a boost within the Democratic Party.

Clinton’s debate strategy provided a window into how she sees this campaign shaping up. The front-runner cast herself as a progressive, railed against excess on Wall Street, relished in making enemies of everyone from Republicans to health insurance companies. Asked how she wouldn’t be a third term of President Obama’s policies, Clinton declined to break with the president, instead saying she’d “go further.” All told, it was an effort to shore up her support within the Democratic Party—a task she undoubtedly helped—and revealed the way she and her team think about the race. Clinton didn’t try to appeal to the ever-shrinking slice of independent Americans—in part, because many won’t support her—Instead she’s betting that enthusiasm of the larger Democratic base will carry her to victory next November.

Bernie Sanders: The darling of the progressive and populist left, the Vermont socialist seemed to struggle on the debate stage, but that won’t hurt him with his loyal cadre of supporters who are packing arenas and writing low-dollar online donations for his campaign. But if a debate is an opportunity to win over new voters, Sanders appears likely to fail. His answers were shaky, his tone was a bit too aggressive, and his inability to respond to jabs from Clinton and the rest of the stage left him damaged on a number of issues important to the broader Democratic voting bloc.

Martin O’Malley: The former Maryland Governor has been calling for more debates for months, but he didn’t do much with his first moments on stage, other than boost his meager name recognition. O’Malley was soft-spoken and soft, unable to take the fight to Clinton effectively or replace Sanders as the progressive favorite. His polling may jump as more people learn his name, but it remains hard to see how he runs a credible challenge to Clinton.

Jim Webb and Lincoln Chafee: Most Americans watching Tuesday’s debate thought “who are they” when the pair of former lawmakers-turned-longshot candidates took the stage. By the end of the night it was clear they don’t have to waste time learning their names. Chafee appeared uncomfortable on stage and shot himself in the foot when he tried to blame one of his first votes in Congress on being new. What little time Webb had before the cameras, it seemed like he spent half of it fighting with moderator Anderson Cooper over his allotted time.

Joe Biden: He wasn’t on the debate stage as his long decision process continues, but the debate raised new doubts about whether there is even a lane for the VP to run in. Clinton’s performance reversed—at least for now—the months-long doom and gloom narrative which had created the urgency within the Democratic Party for Biden to give serious thought to becoming a candidate. Now it appears increasingly like he mistimed his moment, if he was ever going to have one.

Elsewhere in politics, Donald Trump is returning to Saturday Night Live. Fiorina’s big campaign haul. And the 2007 playbook to take down Clinton.

A Confident Clinton Goes on Offense in Democratic Debate
She came out swinging against her rivals, rejuvenating her campaign [TIME]

“I have a range of views, but they are rooted in my values and my experience.”— Hillary Clinton defending herself from charges of flip-flopping, and inadvertently giving Republicans a new line for their ads

“I just arrived at the United States Senate. It was the first vote and it was 90 to 5.” — Former Rhode Island Gov. Lincoln Chafee addressing his vote to repeal Glass-Steagall legislation, which he now says he regrets, essentially saying he didn’t know what he was voting for

Watch the Democratic Debate in Less Than Four Minutes [TIME]

Donald Trump Tweets Up a Storm as Democrats Debate [TIME]

I Watched the Democratic Debate in Virtual Reality [TIME]

In Courts, Running Out the Clock on Obama Immigration Plan [New York Times] 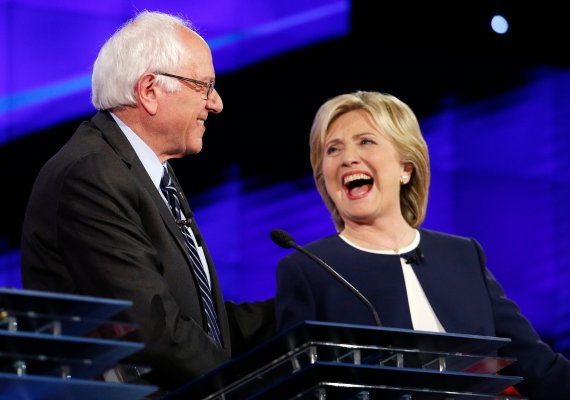