Democratic presidential contenders joined in united, vocal support of the Black Lives Matter movement at Tuesday’s debate, after a summer when some of the leading candidates seemed to struggle on issues of race.

“We need to be committed to making it possible for every child to live up to his or her God-given potential,” said Hillary Clinton, who praised President Barack Obama as a “great moral leader” on issues of race. “We need a new New Deal for communities of color.”

Bernie Sanders, who was interrupted by Black Lives Matter protestors during the summer, also embraced the movement’s goals. “We need to combat institutional racism from top to bottom,” he said. “And we need major major reforms in a broken criminal justice system, in which we have more people in jail than China.”

While Clinton, Sanders and O’Malley have each addressed the Black Lives Matter movement, O’Malley may have had the most to prove as the former mayor of Baltimore, a city which exploded this summer after the death of a black teen in police custody.

“It wasn’t easy on any day. But we saved lives and we gave our city a better future,” said O’Malley of his time as the city’s mayor. “Improving police and community relations every single day that I was in office.”

Though he relies heavily on his past experience as governor of Maryland, O’Malley’s introduction of a data-based policing system in Baltimore has been heavily criticized.

“Look, none of this is easy. None of us has all the answers,”said O’Malley. “But together as a city, we saved a lot of lives. It was about leadership. It was about principle. And it was about bringing people together.”

Read Next: Why Democrats Are Struggling With Black Lives Matter 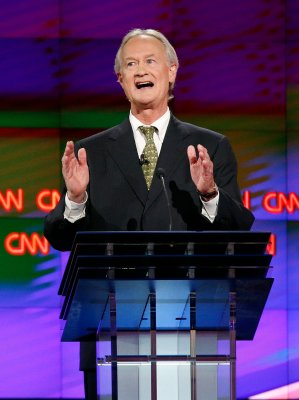 Here's How Lincoln Chafee Justified A Vote He Regrets
Next Up: Editor's Pick