Each Democratic candidate got their share of screen time at the debate in Las Vegas tonight, but former Secretary of State Hillary Clinton was far ahead of the pack in views on YouTube.

According to analysis by Strike Social, a YouTube ad-tech platform, Clinton’s official YouTube account has posted 62 videos that have garnered almost 7 million views. By comparison, Vermont Sen. Bernie Sanders in the No. 2 slot for the Democrats has posted 180 videos that total have amassed 2.4 million views, and former Maryland Gov. Martin O’Malley’s 62 videos have gotten only 287,000 views.

The other two Democratic candidates who on the debate stage, former Rhode Island Gov. Lincoln Chafee and former Virginia Sen. Jim Webb, have not posted any ads on YouTube.

Clinton isn’t just dominating her party rivals on YouTube, she’s also far ahead of the most-watched Republican candidate, Ted Cruz. The Texas Senator has gotten just over 2 million views on the 189 videos he’s posted to the site, besting Republican frontrunner Donald Trump who took the No. 2 GOP spot with just 3 videos and 1.6 million views.

Read Next: 7 Issues the Democratic Candidates Are Likely to Debate 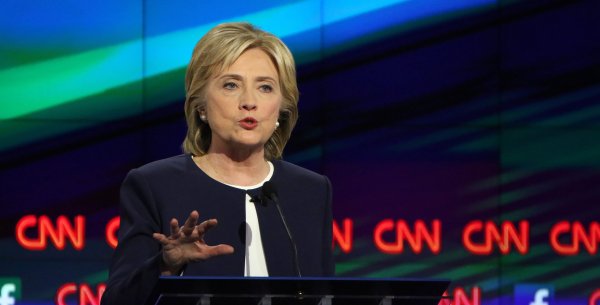 Clinton's 'Hunting the Chinese' Remarks Sets Off Twitter
Next Up: Editor's Pick