Anorexia is the third most chronic illness among adolescents. It leads more often to death than any other mental illness. Therapies that have the greatest success involve extensive family engagement, with parents undertaking the task of persuading the child to eat. It’s exhausting and terrifying and demanding for parents, especially if recovery is slow.

Want useful, well written and smart parenting stories delivered to your inbox? Of course you do! Just click here.

Now a new study from Columbia University has identified for the first time what’s going on in the brain when anorexics make a decision about what to eat. By using fMRIs, the researchers found that when they decide what food to eat, people with anorexia are engaging a part of the brain that is associated with the habitual control of actions, rather than the part of the brain which is associated with values.

This suggests that anorexics don’t decide what to eat or not to eat because they need to lose or gain weight; the brain has just gotten into the habit of deciding not to eat. “The part of the brain they’re using is different from the part of the brain healthy people seem to be using,” says Daphna Shohamy, a neuroscientist and associate professor of psychology at the university’s Zuckerman Mind Brain Behavior Institute, and one of the authors of the study.

While the study was small—just 21 participants with anorexia and 21 without—and did not set out to look for treatment options, there were some implications for parents struggling with an anorexic child. “When we talk about the study with parents it makes an awful lot of sense to them,” says Dr. Joanna Steinglass, associate professor of clinical psychiatry at Columbia university, who specializes in anorexia and worked on the study along with Karin Foerde of New York University and Timothy Walsh of Columbia. “They see habits as they get laid down. They see the behavior become entrenched. They see behavior becoming hard to change. What we’ve now done is begun to look at what basic mechanisms would be that might explain it.”

One of the clear implications seems to be that family-based therapy is more likely to work than just talk therapy, since it appears to be the behavior that needs to change, not any given set of beliefs, or how a patient is feeling that day. “Treatments are going to have to focus in on the behavior in order to be successful,” says Dr. Steinglass.

The study suggests that parents might want to try various strategies to get the kid’s brain out of the habit of deciding to eat very little food. It’s possible, says Dr. Steinglass that the cue that sets off the behavior could be changed. “Before [the anorexia sufferers] walk into the meal, before they pick up the fork and knife, what could you do instead of what you always do that might shake it up a little?”

She tells the story of a parent at a conference whose child cut up their food into very small pieces before eating it. One way to short-circuit such behavior, she suggests, might be to get the child to eat with only his or her left hand. “It’s a very over simplified but useful illustration,” Dr. Steinglass says. “If you try eating with your left hand, does that just slow the whole meal down enough that you can pay attention? It helps raise awareness of what you’re doing.” (It also makes it impossible to cut up your food.)

Another way the study might help parents is in addressing this as a brain problem and not a willpower problem. “Parents seem to find helpful to understand that something has happened where behaviors have gotten stuck,” says Dr. Steinglass. “It’s not really about logical thinking at this point.”

Of course, lots of people have habits they’d like to break: from thumb sucking to gambling. The only way to snap out of it seems to be slow and hard: to notice the behavior, stop it and try to do something else. But some habits, like not eating, are more life-threatening than others. “Breaking habits is not something neuroscientists have figured out how to do,” says Shohamy, who could not believe nobody had ever done brain imaging on anorexics as they made decisions about food before, and credits interdisciplinary work for the breakthrough. “This study means we can draw on richer knowledge than we had before.” 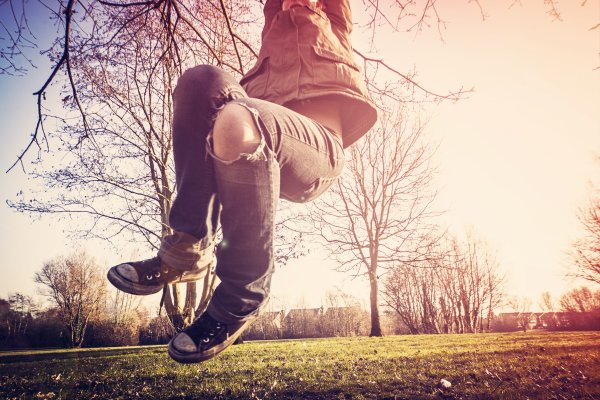 How to Tell if Your Teen's Just Moody or Needs Therapy
Next Up: Editor's Pick