In an ideal world, you’d power through your career sans a single misstep, leaving A+ projects and impressed bosses in your wake. Unfortunately, reality doesn’t quite work like that. It’s impossible to make it through your career without errors, but they can turn into learning experiences that help you become even more of a superstar. Here, seven leaders in their respective fields explain common missteps to avoid.

Your work motto is probably “go, go, go,” especially since technology makes it so easy to stay connected to the office. While no one can fault you for giving it your all, you can’t kill it on the job if you’re not looking after yourself once you clock out. “I used to think that it was selfish when I thought I should take care of myself, because I was responsible for people’s jobs and careers,” said Alexa von Tobel, founder and CEO of LearnVest. “But I realized it was actually vital. The more calm, collected, and strategic I can be, the better that the company is.” That means less skimping on sleep, the gym, and preparing healthy meals! Coffee can’t cure everything, and if a CEO can squeeze in self-care, so can you. Better to get in the habit now, so by the time you’ve snagged the corner office, it’s a regular part of your routine.

2. Trying to be perfect

As tempting as it is to strive for perfection, it’s not possible. It’s much more advantageous to be honest with yourself about your shortcomings instead of straight-up pretending they don’t exist. “Weaknesses are an amazing thing. It’s just vital that you know them,” said von Tobel. “I actually tell employees that if you don’t know your weakness, then that’s a problem.” This is an especially big one when it comes to interviewing for a job. Instead of offering up a canned response like, “I’m a perfectionist” when your interviewer asks for your weaknesses, be truthful. Talk about a real fault (like communication), then explain what you’re doing to improve in that realm.

3. Freaking about the future

Obviously you’re concerned about the future. That’s normal! But you shouldn’t have an all-consuming worry that you’re jeopardizing your career path over because you don’t have it figured out right now. “Society today puts so much pressure on women and men in their 20s to find that career that is going to make them uber-successful and aligns with their passions,” said Brit Morin, founder and CEO of Brit + Co. “To be honest, you spend the majority of your 20s just figuring out what your passion is and who you are as a person.” So, yes, work hard, make connections, and explore your options. Just don’t freak out if you’re not quite sure where you’re going yet.

4. Staying away from what makes you nervous

Various mentors have given me a piece of advice that’s counterintuitive on its face, but really makes all the sense in the world: Do what scares you. Some Levo 100 members echoed that sentiment in their interviews. For example, take Jake Horowitz, co-founder and editor-in-chief of Mic. “We started in an apartment in Harlem with an idea. When we first launched and told the world what we were about, it was exciting and scary,” said Horowitz. Four short years after taking that leap, he found himself sitting across from President Obama to discuss the Iran Nuclear Deal. There’s your proof that sometimes major risks result in even bigger payoffs.

As a Millennial, you have a firm grasp on today’s ever-evolving technology. You’d think that would make it easier to communicate, but it can do the exact opposite. “The ease of communication is actually one of the pitfalls of communication. It’s so easy to send a text message or email, but so much is lost in translation,” said Jamie Rutenberg, COO of Charm & Chain. Instead, she recommended bypassing digital means of communication when you’ve got something important to say. “I am a huge proponent of picking up the phone, being direct, saying what needs to be said, and making sure that the follow up is there so both parties are clear about next steps,” she added.

It’s unfair, but women are often bombarded with the message that being unabashedly brilliant isn’t cool or attractive. Is it any wonder some women don’t let their full smarts shine in the workplace? “I played dumb a lot even though I was really intelligent at 21. I was trying to disarm other people,” said Jesse Draper, creator and host of The Valley Girl Show. “When I was too confident, things would affect me more. I remember people saying things that really discouraged me.” Although Draper still recalls the sting of one woman calling her “a little smartypants,” when she spoke up during a meeting, she eventually realized that being intelligent and confident was a benefit, not a drawback.

7. Not making the most of your mentor

Mentors: Can’t live with ‘em, can’t live…well, no, really you just can’t live without them. A good mentor is a terrible thing to waste, as Scooter Braun, founder of SB Projects, can tell you. “My mentors don’t necessarily have the answer to everything, but what they can do is share wisdom and share experiences,” he said. That’s what mentorship is really about. It’s not so much someone holding your hand through every career step, or hoping they’ll send a job opportunity your way (although that’s obviously a bonus). It’s about learning from their mistakes, successes, and career paths in general. “When I meet someone that I want to be my mentor, I just want them to tell me stories. I want to sit with them and soak up as much history from their lives as I can,” said Braun. “There is this richness in history and the wisdom that comes from experience that trumps any kind of smarts.”

8. Being driven by fear

As a young entrepreneur, you will often find yourself second-guessing your decisions—especially when it comes to the dirty work of firing employees or reprimanding those on the team. For CatalystCreativ founder Amanda Slavin, this was perhaps the biggest hurdle of her entrepreneurial life. “In the beginning of my career, I found myself in situations that were so outside of what I believed in, but I was driven by fear and was so afraid to fire anyone,” she recalled. “I didn’t want to be seen as the bad guy, so I let situations linger. I call it the expired milk situation.’” In fact, she remembered that her fear of removing unfit employees was impacting those who were great for the company’s growth: “At one point, I was forced to let someone go and it was one of the hardest decisions. It got worse when this person ended up speaking badly about me and the company. I wanted to prove that we were in the right, but instead I took the high road. I stuck to staying out of all gossip, kept my head down, and continued to think of the success of the organization. This was a huge life changing moment for me.”

This article originally appeared on Levo.com 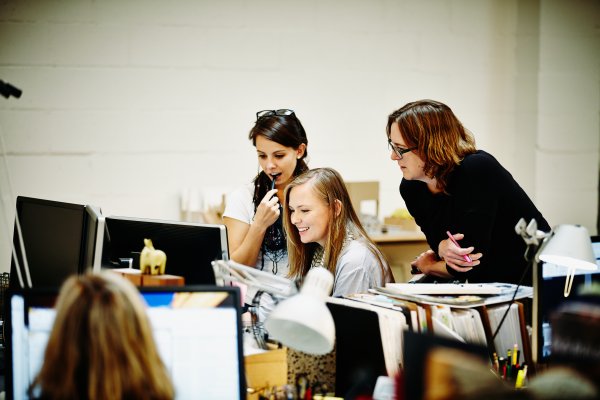 7 Surprising Facts About Women and Ambition from the TIME-Real Simple Poll
Next Up: Editor's Pick