Dancing with the Stars Watch: Chaos Rules on The Switch Up

Each celebrity set out to leave a lasting impression with their dances on "Dancing with the Stars" on Oct. 5, 2015 on the ABC Television Network.
Adam Taylor—ABC
By Melissa Locker

Chaos rules this week on Dancing with the Stars. For the now-annual Switch Up (which is like an amalgam of that one Jason Bateman movie and that other Jason Bateman movie) the producers mercilessly tossed the contestants together like they are nothing more than ingredients at an overpriced salad bar, resulting in some very unlikely pairings like Mark Ballas and Paula Deen. Adding to the chaos, this week’s guest judge is none other than DWTS’s prodigal son, Maksim Chmerkovskiy, meaning that two of the judges are siblings of two of the pros. It’s sheer madness in sheer shirts.

Tamar Braxton and Louis van Amstel: Someone took pity on poor old Louis and teamed him up with a star who can actually dance a samba. They hit the dance floor in a froth of Grecian white-and-gold ensembles for a samba set to Beyoncé’s “End of Times.” It was a fun routine, but Maks has forgotten how to be even moderately forgiving and delivers a harsh critique straight out of the gate. His own brother joined the crowd in boo-ing him. He must have taken it personally, because when the scores came out, his was the highest. 29/40

Hayes Grier and Allison Holker: Last week Allison announced that she was pregnant with her second child, so naturally the producers tapped her to dance with the show’s resident kid. Since you can’t do a romantic dance with a 16-year-old kid whose voice still cracks without looking like a creeper, Allison choreographed a Viennese Waltz that would fit in on any Disney film. The judges were split boys against girls as to whether the dance was good or if Hayes was putting too much energy into the waltz. 31/40

Paula Deen and Mark Ballas: When Paula finds out that she has been paired with Mark, she says he “can’t take” her, because he’s “too edgy.” Mark (and the rest of the world) assure her that he’s not. To prove his point he hits the dance floor dressed like a milk man and then shakes it to bring Paula to the yard for a jive. Carrie Ann dubs it her best dance ever. Then Paula flashed the judges and Bruno got the vapors and died in Maks’s arms. He recovered enough to point out that “Nice Southern girls don’t do that!” and then he critiqued her kicks and flicks. 26/40

Alek Skarlatos and Emma Slater: Alek may be an American hero, but he’s an adorable bashful college kid at heart and he can barely stop blushing while standing in the same room with Emma, let alone dancing a sultry rumba with her. It’s a sizzling routine and there was enough chemistry that Erin Andrews had no qualms about using her hosting powers to peer pressure them into agreeing to go on a date. The judges weren’t as thrilled with the routine as the audience, though, but Maks called Alek the dark horse in the race, which is not a bad thing to be. Plus, he got a date! 29/40

Bindi Irwin and Valentin Chmerkovskiy: Bindi scored the first 10 of the season last week, so pressure is on for Val to continue the trend with their cha cha. In rehearsal, Bindi uses a lot of animal metaphors and then she decides to surprise him by bringing a giant python into the rehearsal room. Being a self-professed “jungle girl” she doesn’t view a giant snake as a threat, but a fun past time. Val is not convinced. She’s such a good influence on him that he even used his very first animal metaphor. They have a fast-paced cha cha that the judges like, especially Maks, who enthuses all over it before giving his brother a 10. 37/40

Carlos PenaVega and Lindsay Arnold: Carlos has a problem in that he wants to win the competition and he also wants his wife to win. It’s like in Monty Python’s Life of Brian when a man on the cross declares, “I’m Brian and so is my wife!” It’s admirable, but also inane. To achieve at least half his goal, this week Carlos has to get through a quickstep with Lindsay. It was an impressive routine that could have passed for a cardio class at Lucille Roberts. “That wasn’t a great quickstep, it was an amazing quickstep,” quipped Maks. 39/40

Alexa PenaVega and Derek Hough: Last week, Alexa forget a few steps and lost a few points and Mark wasn’t very encouraging to her. Luckily, Derek is there to pick up the pieces with one of his patented Mad Max–goth tango routines. It was sharp and edgy and Mark can be seen in the skybox muttering, “Daaaang.” Carrie Ann tried to fake her out by giving her the whole “this is the halfway point in the competition” spiel but ended by giving her a standing ovation. Bruno called her “Alexa Furiosa,” which is the highest praise possible. 40/40

Andy Grammer and Sharna Burgess: According to the judges, Andy has yet to live up to his potential, but this week he cancelled a concert in order to focus on his Argentine tango. The result of the extra time and Sharna’s hard work is a polished routine set to The Weeknd’s “I Can’t Feel My Face” that Bruno declared to be “steamier than an erupting volcano.” The secret to the sultry routine, according to Andy, is that Sharna told him to make a “smelled a fart” face for the duration of the routine. As Sharna died of embarrassment, Maks shrugged, “Whatever works.” 36/40

Nick Carter and Witney Carson: If you want to feel old, please note that Witney’s mom was a big fan of the Backstreet Boys and Witney has, like, fond memories of listening to the music in her car seat or something. Now that you feel sufficiently ancient, let’s move on: For their paso dobles, Witney borrowed some costumes from Underworld and delivered a vampire chic techno routine. The judges liked the routine, but Nick has set the bar too high for himself, so everyone seems disappointed while also giving him 9s. 35/40 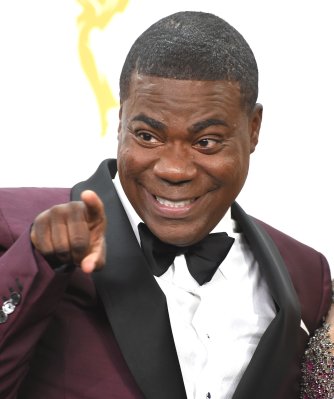 Tracy Morgan Does Stand-Up for First Time Since Accident
Next Up: Editor's Pick