Poll: Trump and Clinton Still In Lead Among Primary Voters

Hillary Clinton remains the top choice among prospective Democratic voters while Donald Trump holds onto his lead as the Republican choice, according to a new CBS News poll.

Clinton held onto a lead as the top Democratic choice a few days ahead of the first Democratic Presidential candidate debate on Tuesday, with 46% of voters saying she was their choice for the nomination. Clinton is 19 points ahead of second place Vermont Sen. Bernie Sanders. Vice President Joe Biden—who has not officially thrown his hat into the ring yet—rounds out the top 3, with 16% of the vote.

If Biden isn’t a candidate, Clinton’s lead over Sanders widens to 56% in favor of the former Secretary of State and 32% voting for Sanders. Clinton has a strong base support that has helped to maintain her lead: six in 10 Democrats find her the most electable candidate, with 51% of women and 48% of older voters in favor of Clinton.

On the Republican side, Trump is still on top with 27% of the vote. His closest competitor, Ben Carson, has shot up in polls to 21% over the last month. The rest of the Republican pool clocks in at single digits, with Texas Sen. Ted Cruz in third place at 9%.

Trump’s candidacy remains strong, as seven in 10 Republican primary voters say they would support him if he became the party’s candidate and 35% saying that they could see Trump winning in November 2016. Still, many Trump supporters aren’t enthusiastic about him, with 42% saying they would support a Trump ticket with reservations and about one in five prospective Republican voters saying they wouldn’t support Trump if he became the nominee.

The poll also asked participants to consider both Democrat and Republican candidates and rank them on a variety of traits, including trustworthiness and leadership qualities. Trump triumphed in leadership qualities, with 65% of voters seeing him as a strong leader. Sixty-one percent of voters saw Biden as honest and trustworthy; with Ben Carson in third with 58%. Biden (67%) and Carson (63%) also are viewed similarly as candidates who are especially caring of voters’ needs; Trump scores the least in this category.

And Biden—who remains mum on his plans to run—is the overall pick as the best candidate for President considering his resume and experience, with 60% of voters believing he has the best qualifications to be in the White House in 2016. 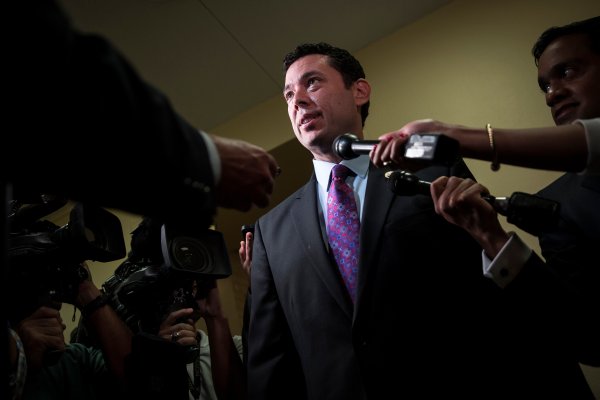 Jason Chaffetz Thinks Paul Ryan Should Run For Speaker of the House
Next Up: Editor's Pick