A pair of explosions struck a peace rally in Ankara, the Turkish capital, on Saturday morning, killing at least 95 people, wounding 248 others, and adding further to the chaos that has gripped the country for months. The blasts, which occurred just seconds apart, ripped through a crowd of supporters of the Peoples’ Democratic Party (HDP), who had gathered to protest months of deadly violence between security forces and Kurdish militants.

Footage broadcast on Turkish TV showed people fleeing the scene of the bombing, and heavily pixelated images of corpses covered in flags, banners, and blood. In a widely shared video, a man is seen walking among scores of bodies and asking, “Is there anyone alive?”

Turkey’s prime minister Ahmet Davutoglu said there were “strong indications” that the attack, the deadliest in the country’s history, had been the work of two suicide bombers. Davutoglu also declared a three day period of national mourning.

No group has claimed responsibility for the bloodshed, although suspicion immediately fell on the Islamic State, or ISIS, whose sympathizers have recently staged similar attacks against Kurdish targets in Turkey. On June 5, a bomb killed four people during an HDP election rally in Diyarbakir, a city in the country’s Kurdish southeast. On July 20, an ISIS militant killed 33 pro-Kurdish activists in Suruc, a town on the border with Syria, in a suicide attack.

The attack looks “eerily similar” to the others, said Soner Cagaptay, director of the Turkish Research Program at the Washington Institute. “Early indicators would point at ISIS as the culprit.”

“This could well be Turkey’s 9/11,” added Cagaptay. “It took place in the heart of the Turkish capital, across from the city’s central train station, a symbolic landmark of Ataturk’s Ankara, and killed so many people.”

But while America’s September 11 brought the country together, at least for some time, the Ankara attack threatens to deepen Turkey’s divisions, exacerbating tensions that have repeatedly spilled over into violence over the past year. In the last four months alone, Turkey has witnessed political uncertainty as result of inconclusive parliamentary elections, a snowballing media crackdown, and relentless clashes between security forces and the Kurdistan Workers’ Party (PKK).

President Recep Tayyip Erdogan, de facto head of the ruling Justice and Development Party (AKP), has accused the opposition, and the pro-Kurdish HDP in particular, of being in cahoots with the PKK. The opposition has accused him of starting a war against the Kurdish insurgents to bolster his political standing.

The PKK resumed its attacks against Turkish security targets in July, renouncing a 2013 ceasefire. The government responded with regular airstrikes against PKK positions and mass arrests of Kurdish activists. Having claimed the lives of at least 140 Turkish security forces and hundreds of PKK militants, the violence has since spread to a number of cities and towns in the southeast, threatening to plunge the region into renewed civil war. More than 30,000 people have died in clashes between state forces and the PKK over the past thirty years.

With only twenty days left until an early election poised to decide Erdogan’s political future, the country now faces a bitter campaign headed by leaders incapable of burying their differences even in the face of a national tragedy.

The recriminations began within hours of the attacks. President Erdogan condemned the twin bombing, which he called “a heinous attack against our unity and solidarity and our country’s peace,” but immediately suggested that the HDP, which retains some links to the PKK, should shoulder at least part of the blame. “Those who practice double standards against terrorist attacks and organizations are giving the biggest support to terrorism,” he said.

The HDP’s co-leader, Selahattin Demirtas, threw the accusation back in Erdogan’s face. “We have lost almost 150 of our people before and after the elections,” he said, referring to victims of the Suruc, Diyarbakir and Ankara bombings. “There is no effective investigation. There will be none regarding today’s attack, either. This is not an attack against unity of our state and nation. This is an attack by our nation against our people.”

Devlet Bahceli, the leader of a far-right nationalist party that placed third in the June elections, blamed both Erdogan and the Kurds. “Turkey is paying the price of the AKP’s sympathetic and warm approach to terror,” Bahceli said.

Demonstrations, meanwhile, took place in several cities across Turkey. In Ankara, three ministers who tried to visit the site of Saturday’s blasts were forced back by an angry crowd. In Istanbul, protesters holding HDP banners streamed towards the city main pedestrian artery. “Murderer Erdogan,” they chanted. “The AKP will answer for this.”

Only a day ahead of the Ankara attacks, the PKK’s top commander said in an interview that his group was ready to call a ceasefire in the run-up of the Nov. 1 parliamentary elections. That call might now be dead in the water, or at least hard to enforce.

No one would be more pleased, says Cagaptay, than the most likely perpetrator of the Ankara attacks, the Islamic State. “They have the most to benefit from a full-blown war between Turkey and the PKK,” he said. 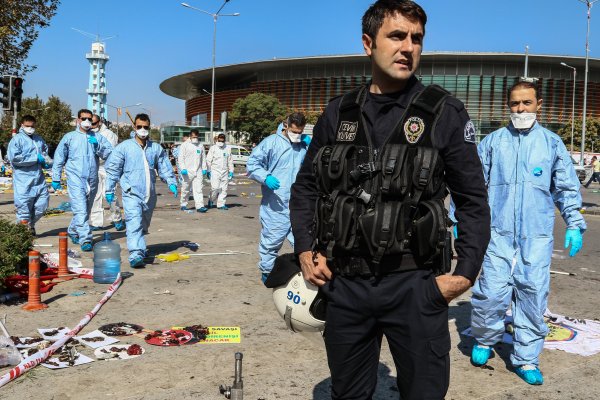 Photos From Ankara Show Chaos After Explosions in Turkey
Next Up: Editor's Pick